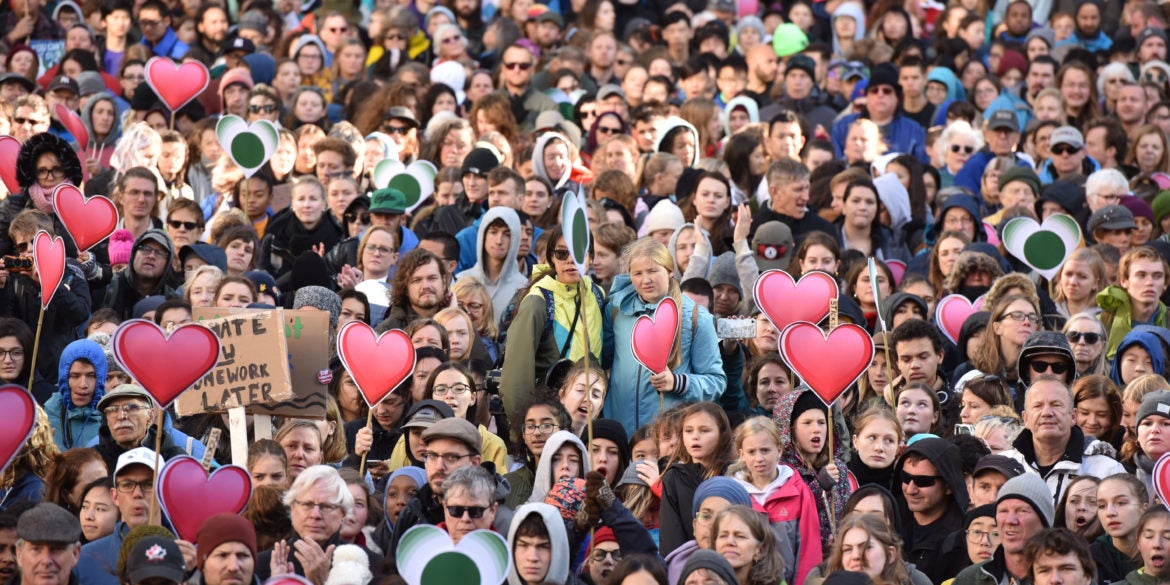 Thousands of hearts were displayed at a climate change rally hosted by Sustainabiliteens at the Vancouver Art Gallery in Vancouver, British Columbia on October 25, 2019. (Photo by Don MacKinnon / AFP)

MANILA, Philippines—Young climate activist Greta Thunberg made quite an impactful speech in New York late last month for the United Nations Climate Action Summit, and a Filipino was there to personally witness the Swedish girl deliver her urgent message to world leaders.

“I got to see her talk in front, with the UN Secretary General,” 2017 Miss Earth Karen Ibasco told the Inquirer at a preliminary contest for the 2019 Miss Earth pageant held at Green Sun Hotel in Makati City recently.

“Everyone was in awe of her. Everyone in the crowd would love to be one with what she’s trying to say, and hopefully there’s action in the future as well,” said Ibasco, the fourth Filipino woman to be crowned Miss Earth.

Ibasco, a medical physicist from Manila, represented the Philippines to the first youth climate summit held at the UN headquarters in New York. She was sent there as the youth ambassador of the Climate Change Commission.

The beauty queen said there was a diverse range of topics and attendees in the summit. “There were Olympic athletes who saw changes in the environment in their areas, there were future scientists, some in the field of fashion. I was amazed listening to them,” she continued.

But she heaped all the praises for the 16-year-old  climate activist from Sweden.

“She’s so authentic. She’s trying to lay out all the important things, facts about the environment,” she explained.

She appealed to Thunberg’s detractors to “stop the hate, try to have an open mind.”

Ibasco added: “Stop saying bad things about her because she’s not really wanting fame, but just wants to make a difference.”

Some of this year’s delegates to the 2019 Miss Earth pageant shared Ibasco’s sentiments.

The singer from the “Land Down Under” continued: “They’re only looking at what’s around them. They need to look at the bigger picture. See what the planet looks like, not just in their own backyard.”

Downes even professed her admiration for the young activist.

“I love her, she’s a game-changer, for someone who is so young to be so brave. I know she has autism, she just goes 100 percent. We all need to take a leaf off her book,” the beauty queen added.

“It’s incredible what she’s doing at such a young age. To be as strong as she is speaking on such a passionate topic. I think it’s needed to be said. And the way that she’s saying it is bringing attention to the things that need to be addressed globally,” the 24-year-old beauty from Calgary said.

To those voicing their opposition to Thunberg’s message, Henderson said, “educate yourself on your speaking points before you speak. Do some research, because you’ll come across ignorance.”

“I got really impressed by her speech. It takes passion for the nature’s problems to deliver that kind of message worldwide,” the 25-year-old beauty from Busan said.

Woo added: “This young girl is pointing out all the problems. Actually, it motivates me to do something. I’m looking forward to spreading my opinion and my thoughts in our final competition.”

Downes, Henderson, Woo, and 82 other delegates are vying for the crown currently held by Nguyen Phuong Khanh, the first Vietnamese woman to win a prestigious international beauty title.

The 2019 Miss Earth pageant’s final coronation ceremonies will be staged at the Cove Manila club at Okada Manila in Parañaque City on Oct. 26, at 4 p.m.

It will be beamed live to a global audience via the FoxLife cable channel.

TV host Janelle Tee is representing the Philippines in the 19th edition of the Manila-based global tilt.