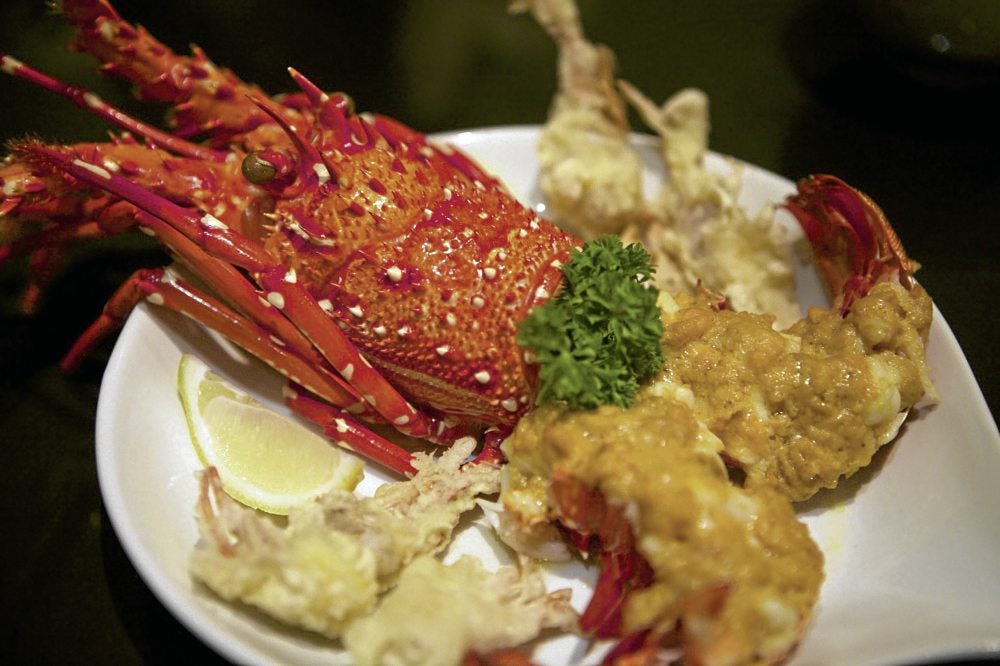 Sushi’s bland, but the French entrees and ice cream? Divine

The Rose restaurant, on the corner of 31st Street and 1st Avenue at the Fort, is a restaurant that I desperately wanted to like. A lot of other people seemed to like it; the place was fully booked on the day we made reservation, and it came highly recommended by a friend.

The chef, Adam Lieberman, who answers his mobile phone himself when you call the restaurant, is warm and affable, welcomes you with a personal touch, and pops in an out of the kitchen to check on how your meal is going. The interiors, too, are lovely, all dark-brown woods and dramatic lighting, with tables clustered around an oval sushi bar where boats filled with sushi drift along past candles: an upscale, could-be-kitschy-but-isn’t interpretation of conveyor-belt sushi.

The Rose is a restaurant in search of an identity. It’s an inviting space imbued with great style and the warm personality of the chef-proprietor, who is obviously someone who can cook. But the problem is that he doesn’t. Mostly, he makes sushi; and not very good sushi at that.

The problem is not with the type of sushi. I’m a great fan of American fusion rolls bursting with great dollops of cream cheese and mayonnaise and funky combinations that can be welcome relief from the solemnity of a purist sushi counter.

But the Dragon Temple Roll (sea eel and cream cheese with wasabi flying fish roe, black sesame seeds and salmon Roe) and Wilde Roll (tuna, salmon, tamago, takwan rolled around Fresh Cucumber and Ocean Shrimp) were both unassuming and modest rather than exuberant. The rest of the sushi and sashimi, on the other hand, did not differ significantly from the type of sushi that you’d get at any average Japanese restaurant.

Why Lieberman feels he should be making sushi is a mystery to me, because the website promises Japanese food “enhanced by classic French cooking techniques,” and this is what he does extremely well. The first page of the menu, before one gets to the sushi and sashimi, is what he should be cooking an entire menu of.

We had the Sea-Urchin Crusted Lobster, and it was divine. We wanted much more, but this is the fault of the lobster for being small, and of the chef only for being good. The sautéed scallops were excellent as well, though again the portion could have been a bit bigger.

The same problem with the Deep-Fried Scallops with Camembert: We could have used twice the portion. But since it’s priced at P180, I guess we should simply have ordered two, or maybe four.

Everyone raves about the ice cream, and there was no disappointment here. Each one was carefully crafted, the mélange of flavors and seasoning tuned just so: Chocolate Flame (chocolate and chillies); Himalayan Salted Caramel; Thai Peanut (so much more to it, with the lemongrass and ginger doing a jig in one’s jaw); and Ambassador’s Butter Cream, with beurre noisette nuttiness cutting through the cream).

If Lieberman only served ice cream we would go there for that. In fact, we did see someone pop up and order a scoop of each flavor and nothing else.

Writing a bad review, or even a very mixed review, is something that I try to avoid doing; I’d rather write about a restaurant that I love and just point out where there could be room for improvement. But I feel compelled to write about The Rose because I feel it could be a good, even great restaurant, if only the chef did not seem so indecisive about where his talents lie.

Manila doesn’t need another sushi place, even if they come floating in on boats. It does need inventive fusion cuisine, cooked lovingly and with care. And yes, we’re terribly greedy and want a great deal of whatever it is, even if the prices are commensurately higher.

In the meantime, go for the ice cream, avoid the sushi, and order more than you think you need. And did I mention the ice cream? This is a place I would very much like to come back to when it has come of age.