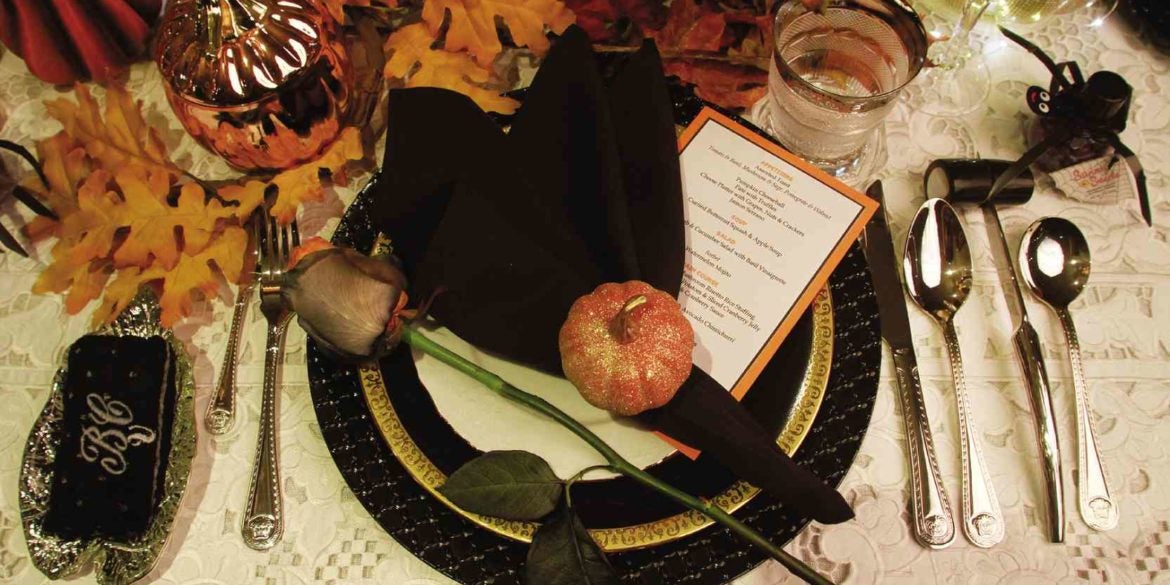 The giveaways are a set of gold salt and pepper shakers, a spider container filled with chocolate-covered sunflower seeds. The menu is designed with Halloween motifs. —PHOTOS BY NELSON MATAWARAN

Embossed stemware, embroidered monogrammed towels and gold-rimmed china add to the richness of the dining table

A hostess known for her flamboyance and creativity, Baby Cruz-Vazquez always layers seasonal ornamentation when she entertains.

At a recent dinner, she conjured up a Halloween that took from the grandeur of fall—dried acorn leaves, gourds in various textures and sizes and fresh Halloween flowers from Poland.

The theme was interspersed with spooky effects such as animated ghouls and witches that enchanted the guests. Guests were beguiled by a wailing banshee as they arrived at the apartment.

Appetizers topped with fresh mushrooms and sage; pomegranate with walnuts and dill; tomato and basil and huge pumpkin cheese balls were served on a tiered tray that eerily resembled a gnarled tree.

Many guests had several helpings of Vazquez’s signature pâté with truffles. Then there were the cocktail staples of jamon Serrano that was flown in by one of her suppliers, and fruit and cheese platters.

The living room was vibrant with vignettes for the eye to feast on, from the carving stations to the Halloween tableaux.

The focal crystal chandelier was dressed for the occasion: skulls in white veils and black robes floated above the piles of autumn leaves.

The dining table was decked out with rust and gold dried leaves, hand-blown glass pumpkins and bouquets of orange and black roses.

A violet rose was laid atop each of the plates which were flanked by giveaways of skull-shaped salt and pepper shakers and spider bottles filled with chocolate-covered sunflower seeds.

The black linen napkin was caught in a pumpkin napkin ring. The menu card was bordered in Halloween orange and adorned with a silhouette of a witch making a brew.

The owner’s collection of embossed glasses and stemware from the Czech Republic, embroidered monogrammed towels from Japan, an embroidered cutwork table cloth and gold-rimmed china added to the richness. Each chair was decked with a unique witch’s hat that was worn by guests for the photo-op.

Over dinner, guests were charmed by the sinister laughter of the ghouls and by the visual delight of the Halloween display on the console—bat flowers, a centerpiece of fresh, deep purple lilies, pumpkins glimmering with LED lights and glistening carved silver gourds.

For starters, the curried butternut squash and apple soup was served in a pumpkin bowl. The herbed crab and cucumber salad was punctuated by the sweet taste of the basil vinaigrette. Guests sucked dainty popsicles of watermelon mojito sorbet to cleanse the palate. The wine was refilled from a giant hand-blown wine glass.

Known for her discriminating taste, Vazquez didn’t settle for the wagyu commonly served in restaurants. “This Japanese beef is higher in red meat content, finer in texture and has less fat than other wagyu brands, but still exceptionally tender and flavorful,” she said.

Its flavor was enhanced by the herbs and tangy dressing of the avocado chimichurri. Pumpkin seeds with cinnamon and a touch of brown sugar was an element of surprise to the beef dish.

An homage to the upcoming Thanksgiving, the turkey was tasty with its crisp, brown skin. Vazquez said she finds bread stuffing boring and starchy. Instead, the fowl was stuffed with risotto, made aromatic with fresh herbs.

The guests left, full and mesmerized by the dinner.—CONTRIBUTED