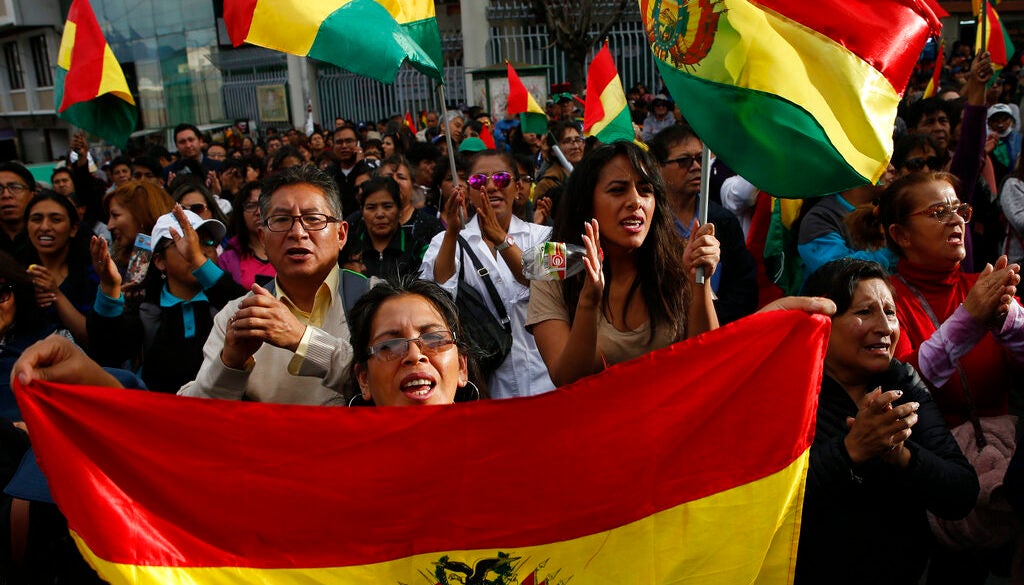 Anti-government protesters march against the reelection of President Evo Morales, in La Paz, Bolivia, Tuesday, Oct. 29, 2019. Morales' backers and foes are blocking streets and highways across the country in a dispute over official election results that show the leftist leader winning reelection without a runoff. (AP Photo/Juan Karita)

The 2019 Reina Hispanoamericana pageant took an unexpected turn when the organizers sent the delegates back home because of the civil unrest taking place in Bolivia where the annual beauty contest is based.

Promociones Gloria announced in a statement written in Spanish that “Reina Hispanoamericana has been postponed until further notice because of the events that are happening in Bolivia.”

The pageant was supposed to culminate in a festive program at the Santa Cruz dela Sierra on Nov. 9 (Nov. 10 in Manila).

Tensions rose in the Bolivian capital of Santa Cruz between supporters of President Evo Morales and sympathizers of the opposition following the results of a hotly contested election that gave the incumbent leader a narrow lead over former President Carlos Mesa.

Protesters blocked roads in Santa Cruz, and shop owners closed their businesses in solidarity with a protest called by the opposition, which cited electoral fraud.

The Philippines’ representative, bank employee Katrina Llegado, shared her insights on the current political climate in Bolivia on Instagram.

“Your people are both beautiful and tough. I admire the strength of your conviction,” said the 21-year-old finance graduate from the De La Salle University.

“I humbly ask for prayers for Bolivia. Pray for protection, peace, and justice,” she continued, adding “see you again, Bolivia!”

Llegado confirmed she is temporarily staying in Toronto “to spend meaningful time with my loved ones.”

The Reina Hispanoamericana pageant is an annual international beauty contest celebrating Hispanic culture, heritage and language that started in Bolivia in 1991 as “Reina Sudamerica.”

In 2007, it rebranded to “Reina Hispanoamericana” and started accepting countries outside Latin America. The Philippines became the first Asian country to participate in 2017 with Teresita “Winwyn” Marquez, who eventually took home the title.