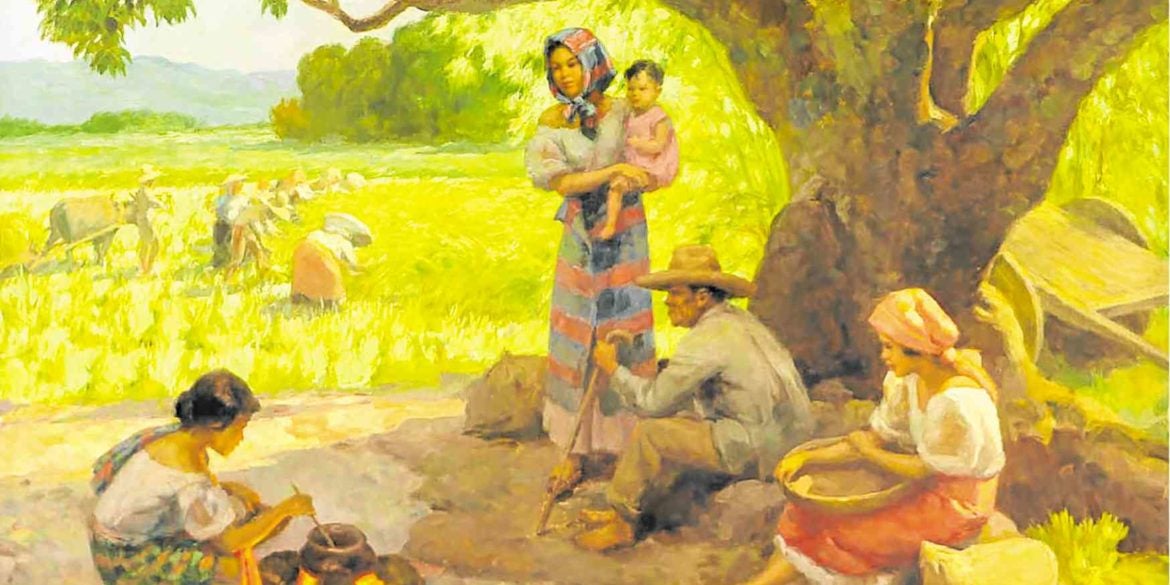 “Under the Mango Tree” by Fernando Amorsolo

“These are a treasure trove of Amorsolos and important pieces from the Don Luis Ma. Araneta y Zaragoza collection,” said León curator Lisa Nakpil. “These include a Fabian de la Rosa and various amazing antiques.”

Among the works by Amorsolo (1892-1972) is a 1927 work, “River” (18” x 12”). It is a very notable early work in which Amorsolo exhibits how he captures “the fleeting effect of light,” says the Kingly Treasures catalog. “His picture reveals the intense, almost festive life of country folk, predominantly women, within a forest glade, suggesting a timeless and enduring scene.”

Meanwhile the 1962 work “Under the Mango Tree” (24” x 33”) shows Amorsolo at the height of his powers. “In his Golden Period, Amorsolo had perfect control over his prodigious technical means as draughtsman and colorist,” according to the catalog.

A most significant item in the collection is Fabian de la Rosa’s (1869-1937) “Landscape (Mariquina).” The mentor of Amorsolo, De la Rosa is perhaps the most important of the old masters after Luna and Hidalgo. The Kingly Treasures catalog calls the landscape “a narrative of light… in which the painter looks to the remote landscapes of the country to inspire his moody and richly textured paintings.”

Among the antique furniture, quite notable is, as the catalog puts it, “a rare, late Neoclassical armchair with mother-of-pearl inlay.” Its golden narra wood is “stained” to make it look like kamagong or ebony wood.

“It is one of the very few Filipino chairs to have original mother-of-pearl inlay,” remarks social historian Augusto Marcelino Reyes Gonzalez III. “It is a rarity characteristic of the vaunted pieces in the Luis Ma. Araneta collection.”

Among the more notable objets d’ art in the Araneta collection (now the Pagrel collection) is “a pair of archangels,” made of batikuling wood with original polychromy and gilding, from the turn of the 19th century in Bulacan or Pampanga.

They could have part of the seven archangels in a belen or creche setup during Christmas, according to Gonzalez. Or they could have just flanked a patron saint in a home altar.

Luis Ma. Araneta (1916-1984) was the son of the lawyer Gregorio Araneta y Soriano and the heiress Carmen Zaragoza y Roxas. They lived on Hidalgo Street in Quiapo, Manila.

Pious and privileged, Doña Carmen and Luis when he was young used to dress the family icons of Carmelite Saints Teresa de Avila and John of the Cross.

According to Gonzalez, Araneta through his maternal grandfather, Jose Zaragoza y Aranquizna, was in fact descended from Teresa of Avila, the foundress of the austere order of discalced or “barefoot” Carmelites.

Doña Carmen and Luis also dressed up the carrozas that were used during the fiesta of Our Lady of Mount Carmel, whose shrine was housed at the San Sebastian Church of the Augustinian Recollects, who had been given the canonical permission to promote the devotion to the Madonna of Carmel.

The Araneta and Zaragoza clans were widely traveled in Europe, North America and Asia before World War II, and Luis experienced great architecture and elegant interiors which he applied to his architectural profession.

Araneta designed Makati Medical Center, one of whose founders, Dr. Constante Manahan, was married to Elvira Ledesma-Manahan, who was the architect’s best woman friend.

Wedding of the century

Moving to Forbes Park in 1959, Luis Ma. Araneta hosted the grandest and tastiest parties so that his address became “the epicenter of Manila high society,” writes Gonzalez in the Kingly Treasures catalog.

Araneta married Emma Benitez of the famous clan of educators from Pagsanjan, Laguna, and they had three children, of whom there was only one male, Greggy Araneta, who married Irene Romualdez Marcos in 1983 in Sarrat Church in Ilocos Norte that was said to have rivaled the pomp and pageantry of the royal wedding of Prince Charles and Princess Diana.

Although the Marcoses were in power, Araneta insisted on paying for the vast costs of the Philippine “wedding of the century,” arguing that the tab was his since he was the father of the groom.

Luis Ma. Araneta died the following year in San Francisco, California, where he was shopping for crystal Baccarat stemware for his forthcoming parties.

Araneta was the inveterate collector of things ever fine, luxurious and very, very tasteful up to his final hours. Gonzalez writes, “He died in good spirits.” —CONTRIBUTED