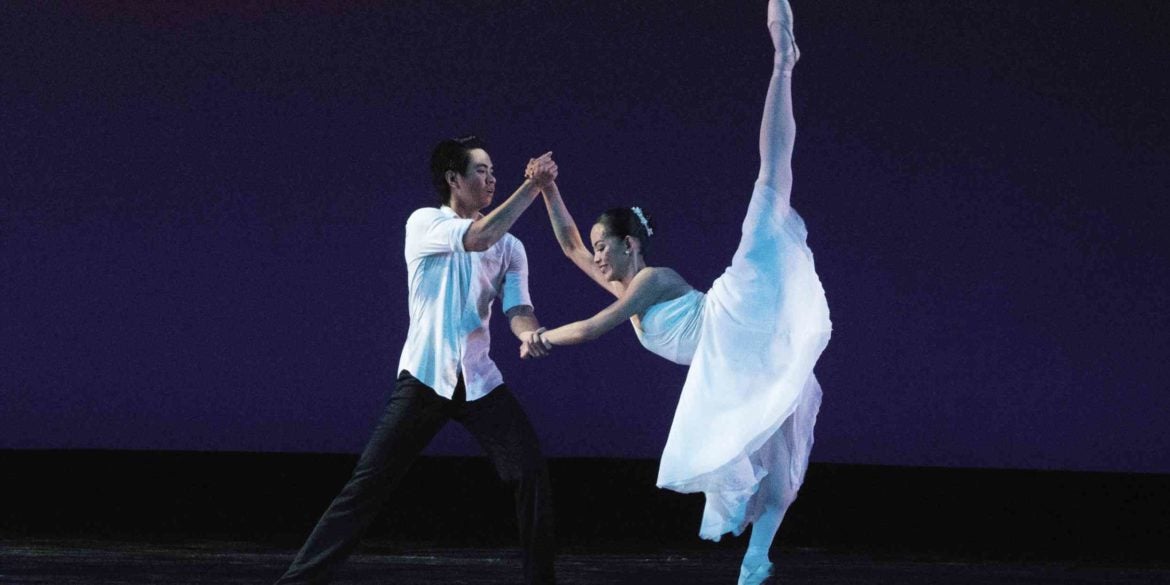 Matthew Davo and Kim Abrogena in “Serve at Sayaw”

PBT’s ‘Encore’ a showcase of strong generation of dancers

After a successful tour in the United States, the Philippine Ballet Theater (PBT) presented its crowd-pleasing classics and contemporary ballets on home ground at the Cultural Center of the Philippines. “Encore: the Best of PBT” showed the range of bravura, lyricism and national pride expressed by a strong generation of dancers.

One of its signature pieces is “Vinta,” choreographer Gener Caringal’s homage to the outrigger boat in Southern Mindanao. It never fails to impress the audience with the dramatic use of fabrics, the female corps playing with the tubular malong—appliquéd with geometric patterns of the sails, the strong angular movements, and the overhead lift in the pas de deux.

In the classics, Jared Tan, formerly with the Atlanta Ballet, and Veronica Atienza performed elegantly in the demanding “Don Quixote Pas de Deux,” which brought the house down.

Atienza dazzled with her fleeting footwork, the coquettish turn of the shoulders, the long balances, expansive grace and effortless multiple pirouettes.

Tan impressed the audience with his soaring beaten jumps, his maturity, and his timing in catching Atienza in the fish dive.

The lyrical Kim Abrogena reprised her role in the “Merry Widow” pas de deux with Jimmy Lumba as her partner. Abrogena danced with delicate rapture while Lumba was a tender and attentive partner. The only problem with this number was the shadowy lighting which tended to hide the dancers’ facial expressions.

Regina Magbitang and Dominador Delmo flew through their solos with great enthusiasm, pulling out powerful moves. Magbitang threw off sharp fouettés (whipped turns) in different directions. Delmo’s leaps were suspended long enough to do a scissor split with his legs.

Tony Fabella’s “Sa Entablado” was a series of solos, duets and ensemble work set to Filipino music that recalled the big band era at the turn of the 20th century. The late choreographer was noted for his musicality and phrasing.

At the matinee, the dancing was efficient but not compelling. The dancers lacked the panache that matched the music. Amid the throng, Mikaela Samson stood out with her stylistic nuances and expressive upper body.

The ultimate show piece was PBT artistic director Ron Jaynario’s “Serye at Sayaw,” a story about a girl who gets entangled in different relationships. The OPM music resonated with the audience.

Abrogena, the lead, performed with warmth, fluidity and an all-encompassing passion for life. Her love interest, Matthew Davo, threw himself into the role with care.

Jaynario always challenges his dancers. Certain musical passages were choreographed as moments to display tricks. Typical of his work, “Serye” was rife with acrobatic partnering such as swinging a woman over a man’s shoulder or turning her upside down and writhing around the man’s body.

Magbitang was tossed and twirled in the air by Delmo and Mark Joseph Pineda in “Hanggang sa Dulo ng Walang Hanggan.” Instead of drama and lyricism suggested by the music in “Kailangan Kita,” Jaynario created a complex pas de deux to match strength and boldness of Gladys Baybayan and Julafer Fegarido.

Our favorite was Tan’s solo “Ano’ng Nangyari sa Ating Dalawa” where he expressed dynamic contractions, suspended movements and emotional resonance with the music.

Although PBT’s matinee was impressive, there were some rough edges in the dancing, and the lighting design was dull.

Nonetheless, the combination of familiar Filipino music and classical bravura is always a surefire hit.