'We can do it': Empowering female students through tech-voc programs | Lifestyle.INQ ❮ ❯ 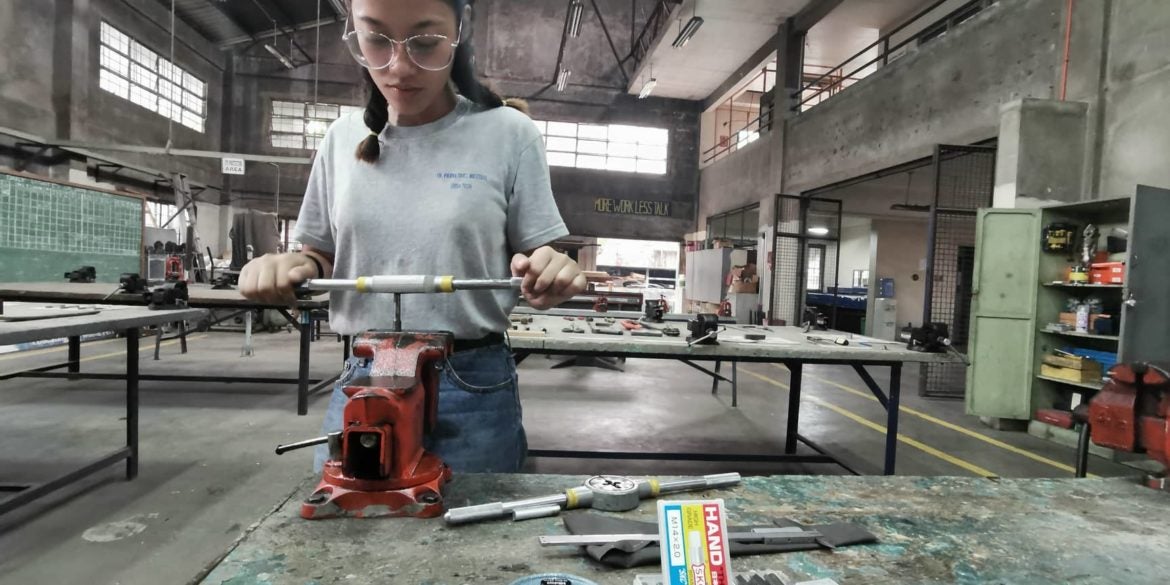 ‘We can do it’: Empowering female students through tech-voc programs

MANILA, Philippines — With her hair braided and a hint of makeup on her face, 20-year-old Leira Gamo would appear like she’s just the same as any ordinary girl.

However, she proved that she can be one of the boys, as she took on electromechanical technology as her technical vocation course–a road less traveled by most women her age.

With every turn of the screw, Gamo was focused on her craft, and appeared to perfect what she is working on.

Aside from Gamo, there is also 17-year-old Jemicah Vicente Arca, who also took up the same course as Gamo.

In her desk, Arca is testing sensors. She makes sure that every time metal is placed near it, a loud beep would blare out of nowhere.

Both Gamo and Arca are scholars of the Fr. Pierre Tritz Institute – Educational Research and Development Assistance Technical and Vocational (FPTI-ET) School in Pandacan, Manila, which provides free quality education — through a scholarship — to marginalized but deserving members of the youth.

It all starts with trying

In an interview with INQUIRER.net on Thursday, both Gamo and Arca shared that both of them simply tried to get into FTPI-ET School, and started to love their respective fields.

(I help out in the canteen, because my aunt works here. She told me I should try to study, then as I went on, I started enjoying it.)

Meanwhile, Arca said she entered the institution in hopes to get a sponsorship. She previously studied nursing at the Manila Adventist College, but had to drop out of school due to financial reasons.

Arca, who admitted she did not expect taking up electromechanical technology, also came to love her course eventually.

(I enjoy what I do. This is where I also found out that what I’m doing is also not only for the boys, but girls can do this as well.)

Since its establishment in 1994, the FPTI-ET School has welcomed female students and faculty in their institution.

The institute, which said it consistently had six students out of 10 per batch, are now facing a current dilemma today: lack of interested students.

“This is not an isolated concern. If you look at the other [technical vocation] institutions, post-high school training institutions, the number of enrollees is not as high,” Magsalin added.

According to the school administrator, one of the factors that may have contributed to the dip in the number of enrollees was state universities opening their own scholarships.

But even though male students have increased in numbers compared to female students, Magsalin said the latter can keep up with ease.

He even somehow echoed Arca’s pronouncement: “They [female students] can perform the job equally as well as the males.”

“But the reality is yes, it’s tough work, but it does not distinguish who can work on it, as far as gender is concerned,” he added.

And, somehow, the best example to Magsalin’s words are Gamo and Arca themselves, who are almost done with their respective courses.

Gamo, who is a month away from completing her course, has high hopes of being absorbed in the company where she currently takes her on-the-job-training.

Arca, meanwhile, is almost done too with her course. She is looking forward to go back to college and finish her degree. However, she remains thankful to the school that trained her with additional skills.

And with a smile on her face, she proudly added: “Lahat naman po ng nagagawa ng lalaki, kaya naman din po ng babae [The things that men do, women can do it too].”