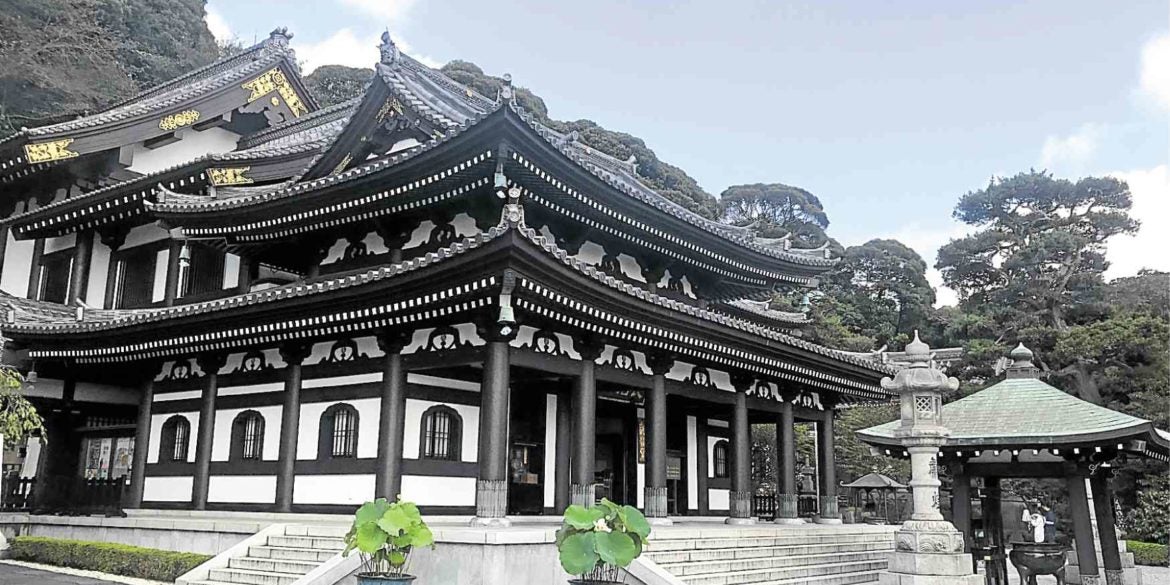 Hasedera has many prayer halls, beautiful gardens and a pond. —PHOTOS BY ANGELO MORALES

It is the Kyoto of Eastern Japan because it is home to important temples and shrines, including the 800-year-old Zeniarai Benten Shrine

I’m sorry, did you say ‘washed my money’?” I wanted to make sure I heard my student correctly. As a warm-up lesson to get my Japanese students in English mode, we usually talked about their weekend activities.

“I went to a shrine to wash my money,” Kazumi told me. “It’s for good luck,” she added.

Kazumi was talking about the Zeniarai Benten Shrine in Kamakura, a coastal town in Kanagawa Prefecture, about an hour away from Tokyo.

Zeniarai literally means “washing coins.” Benten is a goddess associated with music, wealth and beauty. The shrine, approximately 20 minutes away on foot from the West Exit of Kamakura Station, is about 800 years old, and the tradition of washing money in the shrine’s natural spring dates back to the 1200s.

Kamakura is oftentimes referred to as the Kyoto of Eastern Japan because it is home to important temples, shrines and other historical places. It also used to be a political capital of Japan. If one doesn’t have enough time to visit Kyoto but still like to immerse in Japanese culture, Kamakura is a great choice.

By train, from Tokyo Station to Kamakura Station, it takes about an hour (56 minutes, to be precise) via the Yokosuka Line bound for Kurihama. The fare is just ¥920 (P450).

As I stood in line waiting for my turn to buy my “money washing” kit which included a wicker basket, incense sticks, and a candle, I learned that the shrine had, in recent years, gained popularity among tourists. It’s no big surprise. It’s not every day that you encounter a sacred place where you literally wash your coins and bills in the hope that they would multiply.

Before entering the cave where people wash their money, I had to do a simple ritual, starting with a short prayer in the small shrine just outside the cave.

First, throw a coin in the wooden offertory box. Then ring the bell. (Bear in mind, though, that some shrines don’t have a bell. In case there’s no bell, just move on to the next step.) Finally, execute two claps, two bows and one clap, or the 2-2-1 formula. This ritual is only for shrines, not temples.

After saying my short prayer, I headed to the candle area, lit my candle and placed it in a candle holder. I lit incense sticks and placed them on the incense burner.

Then I entered the cave to wash my money.

It’s actually quite simple, and the word “wash” is used very loosely in this situation. Just put your money in the wicker basket (I made sure I brought a crisp ¥10,000 bill and ¥1,000 bill and some coins), use a ladle to pour the holy water in the basket to wash your money. Do it a few times. After that, you’ll see an area where you can return the basket. It’s also a good idea to bring a small towel to dry your bills and hope and pray that your money multiplies.

That’s it, basically. After doing the whole ritual, I took some more photos around the shrine and made it back to Kamakura Station. There’s no entrance fee to the shrine but you do have to pay ¥100 (P50) for the “money washing” kit.

Other must-see places in Kamakura include Kotokuin, site of the Kamakura Daibutsu (or the Great Buddha of Kamakura). The temple is worth a visit if only to see the gigantic bronze Buddha statue on the grounds of Kotokuin. With a height of 11.31 m (13.35 including the base), the Kamakura Daibutsu is the second tallest Buddha statue in Japan. (The statue in Todaiji Temple in Nara holds the title of being the tallest.)

Dating back to the 1200s and originally located inside a temple hall, the 121-ton Kamakura Daibutsu now stands in open air after the temple hall was destroyed several times. While the temple does get crowded, one feels a sense of serenity while staring at the face of the great statue, which was designated a National Treasure by the Japanese government.

Kotokuin is accessible by train or bus from Kamakura Station. Take the Enoshima Electric Railway bound for Fujisawa (¥190 or P95) and get off at Hase Station. From there, it’s about a 10- to 15-minute walk. Alternatively, you can take a bus from the terminal at the East Exit of Kamakura Station.

Another must-visit in Kamakura is Hasedera, site of the temple housing the 11-headed statue of Kannon, the goddess of mercy. Built on the slope of a hill, Hasedera has expansive temple grounds with several beautiful gardens, a pond with plenty of colorful koi, prayer halls, a small restaurant and a scenic view of Kamakura.

I also noticed hundreds of small statues called Jizo Bodhisattva, which helps the souls of deceased children reach paradise. The entrance fee to Hasedera is ¥400 (P200) for adults, ¥200 (P100) for children aged 6-11.

The most important shrine in Kamakura is the Tsurugaoka Hachimangu Shrine. It has a rich history, and one of the interesting facts is that it used to be both a Shinto shrine and a Buddhist temple. Today, it is just a Shinto shrine. Also designated as an Important Cultural Property, the shrine is accessible from Kamakura Station East Exit via a 10- to 15-minute walk.

A final note before you buy that train ticket for Kamakura to wash your money or to see the Kamakura Daibutsu. For safe, smooth and enjoyable touring, here are a few tips: 1) fall in line, there’s always a queue in restaurants, convenience stores, any public place; 2) observe what the locals are doing; 3) keep your mobile phone on silent mode while on a train, as talking on phones is a commuter’s pet peeve. Also, when taking pictures in public places, ask permission first; 4) try to use basic greetings such as arigatou to say “thank you” or sumimasen if you want to say “excuse me”; 5) follow the “no” rules—smoking in certain areas; photography; touching of objects or artifacts; walking while eating; bringing of outside food to other restaurants.

Look around, be mindful, and hopefully, luck will touch the money you washed.