Astronauts and nail varnish: On the set of ‘The Crown’ | Inquirer Lifestyle ❮ ❯ 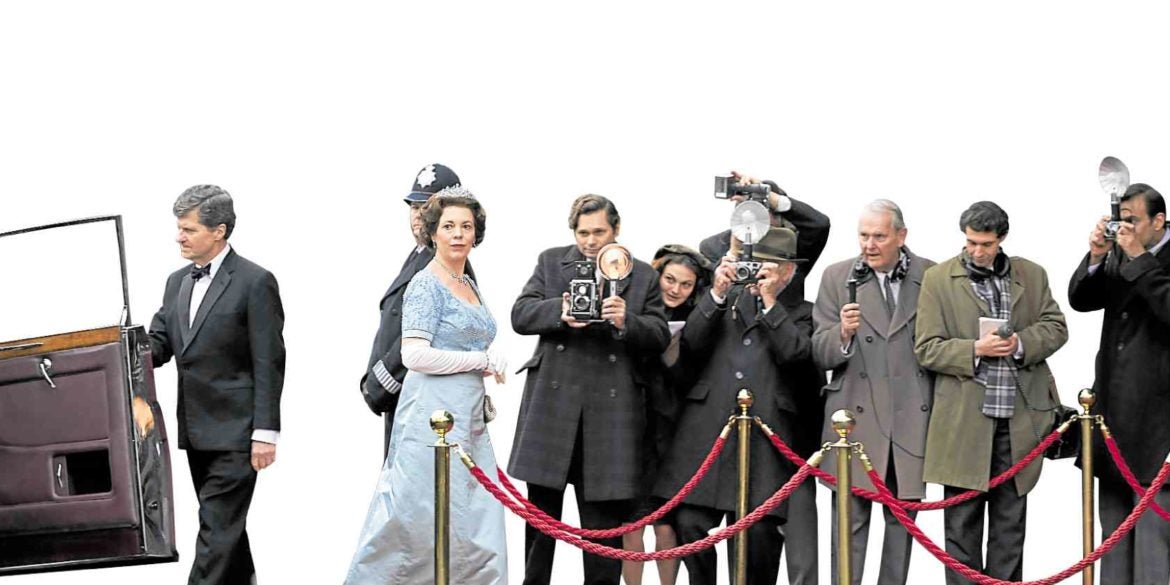 Astronauts and nail varnish: On the set of ‘The Crown’

We went to London to visit the Queen—well, Olivia Colman who plays Queen Elizabeth II in the third season of ‘The Crown’

Would you rather be here or Times Square at New Year’s,” we heard a voice ask, his identity obscured by the sea of people that had gathered on that cold, wet morning outside Buckingham Palace to witness the Changing of the Guard.

He wasn’t talking to us but we answered silently: We would rather be where we were going—the set of “The Crown.”

Buckingham Palace was just a pit stop on a day that was a juxtaposition of real vs reel. Our actual destination? Lancaster House, the filming location that day. Yes, we went to London to visit the Queen—Olivia Colman who plays Queen Elizabeth II in the Netflix show’s highly anticipated third season.

It was November 2018, a full year before the show’s third season was set to premiere.

Before we could go in, a few reminders: No food or drink in the house except for water, and no photographs or social media. We also had to present government-issued IDs for security check. Not surprising, considering Lancaster House is right next to Clarence House, the official residence of Prince Charles and his wife Camilla. (Queen Mother, Prince William and Prince Harry had all previously lived at Clarence House, too.)

Lancaster House is one of three main locations that doubles as Buckingham Palace in the show. “It was quite brave of them to allow us to film here. It’s run by the Foreign Office and we have a very good relationship with them. We come here a lot,” said Pat Karam, who has been “The Crown’s” location manager for the past three seasons. “I’m told there was no objection from the Palace. I think that’s as much of an endorsement that we’re going to get.”

“We don’t have formal communications with the Palace at all. Certainly, they would never comment on the show. I think they enjoyed seasons 1 and 2 but I suspect as it gets nearer to modern day, it will become more difficult for them to look at it quite so objectively,” said executive producer Andy Harries. “But our intention is not to shock, the purpose of our series is not to be absorbed by the scandals. It’s just trying to tell the story of the monarchy and it’s a hell of a story.”

Executive producer Suzanne Mackie said, “I think (writer) Peter Morgan’s ambition was always to take the world of the monarchy we know and understand, then take you right in and right underneath and inside and into the psychology and sort of through the keyhole. They are human beings inhabiting a completely extraordinary world and yet they are subject to the same human conditions that we all are.”

The crew removed the plastic sheets that had been protecting the steps in preparation for the next scene. “Endless plastic sheets,” according to Karam, are among the many ways the show treats its locations with respect. They also put tennis balls on the bottoms of stands so they don’t damage the carpet.

Fans had previously seen the actor in “Game of Thrones” as Edmure Tully. Shooting the HBO series was “much muddier, dirtier,” he said with a laugh.

According to Menzies, playing Prince Philip comes with a unique set of challenges, the least of which is the fact that he has to get his dark brows dyed every three days. “It’s an unusual challenge to portray someone who is so visible to so many people and think they know what he sounds like. It’s a technical challenge. I certainly watched plenty of what Matt (Smith) did then I looked at the man himself.”

In a gorgeous room at Lancaster House, with Queen Victoria looking down from an 1846 Count Alfred d’Orsay painting, Helena Bonham- Carter, who plays Princess Margaret, said, “Every time I have a doubt of where I am as we go from one episode to another, I look at my nail varnish. This morning I arrived with 1976 nail varnish. Pearlescent, from last week.”

“The Crown’s” third season covers the years 1964 to 1977. Episodes are shot mostly chronologically, with each episode taking 20 days to film. That day, as they shot Episode 7, they traveled back to 1969 when astronauts Neil Armstrong, Buzz Aldrin and Michael Collins visited the royal family in Buckingham Palace. “When it comes out November next year, that will be 50 years since the moon landing. What a coincidence! And then lovely Claire (Foy, who played Queen Elizabeth II in the first two seasons) played Neil’s wife in ‘First Man’ so it’s all kind of connected,” said the show’s publicist Allie Elwell.

There was a lot of buzz about the show’s new actors because the original cast had been so beloved by the show’s fans. But the recasting is necessary as the show’s characters get older.

“It’s a hard thing to inherit. We have a double ghost that we’re pursuing,” said Bonham-Carter who replaced Vanessa Kirby. We’ve got the real person and then you’ve also got the actress who’s delivered an award-winning performance.” She was terrified, she said, because the show was incredibly successful. “Also I’m playing Margaret at an age where people can recognize and remember her. My first thought was ‘I didn’t look like her at all.’ I’m 5 foot, the right height, that’s about it. My eyes aren’t blue… But everyone has an opinion so you just have to do your own version.”

When Olivia Colman was offered the role of Queen Elizabeth II, she did not hesitate. “It was a very quick ‘Yes, please.’ I was a huge fan anyway. I binge-watched all of series 1 and then I found out about the job before I watched the second season. It was weird watching knowing… I kept sort of gulping, oh god.”

Colman, who was wearing a bubble jacket and Uggs with her Queen Elizabeth dress between takes, shared how she called her predecessor Foy soon after getting the offer.

“The producers gave me her number. I spoke to Claire and she said, ‘You’ll love it, and everyone’s lovely, and you should do it.’” And then she set up Netflix for her parents so they could watch the show she was soon joining. “I showed them how it worked on our telly and then they sat there and they did about five hours of solid Netflix watching. They watched it all now and they’re very excited,” she shared.

Erin Doherty who plays Princess Anne and Marion Bailey, who plays the Queen Mother walked into the room. “We have my mommy and my little girl,” Colman said.

Someone praised Doherty’s complicated ’60s hairstyle and she said, “Thank you. I love it. It isn’t mine. It’s very pinned into my head right now.” “I’m old enough to remember actually having that hairdo,” said Bailey.

Doherty, who we spotted fist-bumping a child actor who was playing one of her younger brothers after a good take, said of her young costars, “They’re brilliant, honestly. Today was the first time that I met two of them. They keep changing as they get older. They’re absolutely fantastic. They have to keep being reminded not to look at cameras because I mean that they’re massive to them. It’s quite infectious to see someone so just lit up by this industry and it reignites how lucky you are to be in this in this room.”