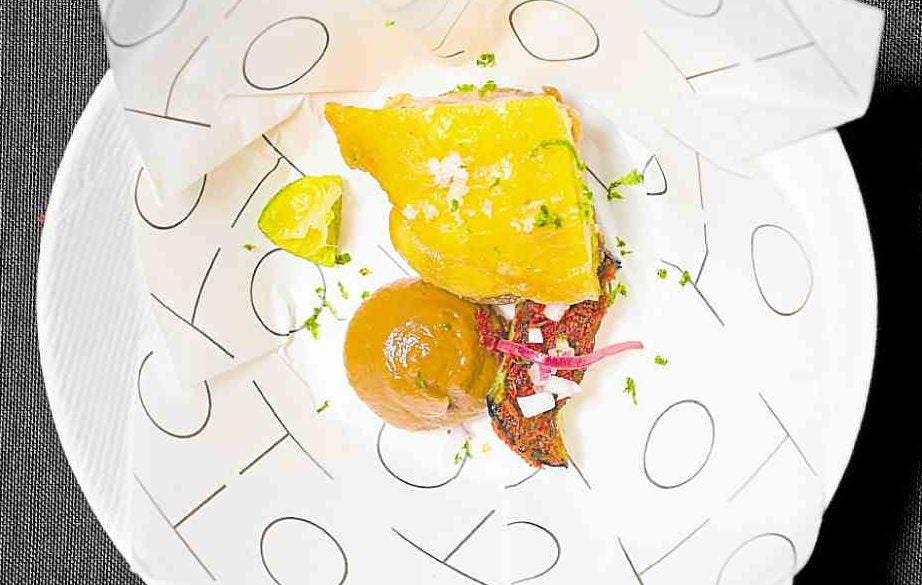 In ‘Off Menu,’ Jordy Navarra, Richard Ekkebus and other culinary leaders work in tandem

Hong Kong’s vibrant food scene has hit a slump  due to the student-led protests. Restaurants that were usually fully booked are now seeing vacant tables.

Hope is not lost, however. The chefs are marching on and doing everything they can to keep the food scene alive.

Recently, they gathered to hold “Off Menu,” an event which paired them with some of the world’s most celebrated F&amp;B trailblazers to provide a rare dining experience.

Organized by T. Dining, the three-day food fair took place at The Peak Galleria on Nov. 15-17. Each chef tandem was given a booth to serve original dishes highlighting a particular ingredient.

Among the exciting matchups was Richard Ekkebus of Amber and the Philippines’ Jordy Navarra of Toyo Eatery.

The two have been good friends for two years now, but they had never cooked together until now.

“Jordy came with his lovely wife and his team for lunch at Amber one time,” Ekkebus recalls. “He brought me this beautiful pottery made in the Philippines and I was charmed by his kindness and generosity. I got to know him better over the years. I eventually dined in his restaurant. He has become a dear friend, and is one of the nicest people I know.”

Navarra admires Ekkebus as well. “Richard’s cooking style is super refined, classy and smart, similar to how I see him as a chef and person. Beautiful food from a beautiful man.”

In “Off Menu,” the two were given the Lung Guang chicken to work with. Ekkebus turned it into a juicy, crispy-skinned roulade seasoned with dried sea lettuce. It came with a jus of chicken carcass, oyster sauce and dried oysters.

Vicky Cheng of VEA and Richie Lin of Mume in Taiwan teamed up to showcase rice. Hong Kong-based chef Cheng gave a simple comfort dish a luxurious upgrade. He cooked grains in a flower crab stock until rich and silky, then threw in tender pieces of fish maw, crab meat, preserved turnip and crisp fried dough to produce an indulgent bowl of congee.

Lin did his version of claypot rice using sushi rice from Taiwan, abalone cooked in a combo stock, and duck liver sausage. It was capped with a sauce made with double-boiled duck consommé.

Wagyu Mafia’s Hisato Hamada of Japan cooked the brand’s signature beef and served a hoagie inspired by his adopted home, Hong Kong. Strips of grilled Ozaki striploin steak were sandwiched in  baguette, along with potato puree and black truffle sauce.

Vicky Lau of Tate Dining Room had the pleasure of working with him and cooking the same premium beef in her style—a tartare seasoned with Sichuan spices and sesame oil and placed on rice cakes composed of three grain varieties.

The event showcased local ingredients and the creativity of chefs. May Chow of Little Bao Diner played with plant-based meat and made a breakfast taco of sancho leaves, shiso, soft scrambled eggs and homemade togarashi spice.

Likewise in the all-star chef lineup:

Tam Kwok Fung of Macau’s Wing Lei Palace gave a new spin to the classic red braised pork belly by slow-cooking a special breed of Japanese pork called Yume no Daichi in a vat of mushrooms and truffles, and then serving it with steamed quinoa and millet bun.