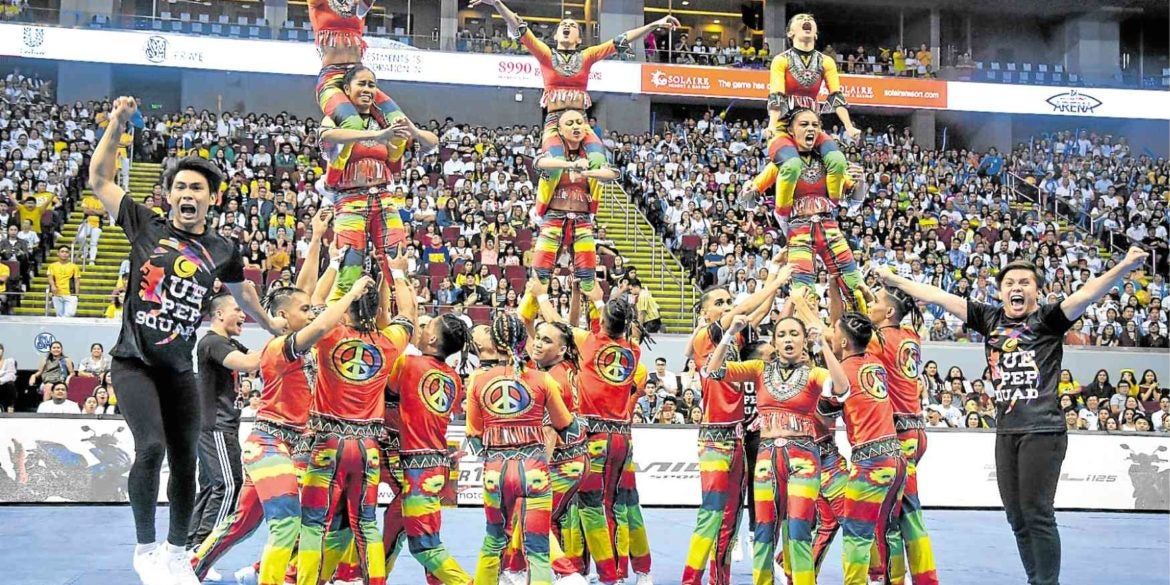 UAAP Cheerdance tilt brings out the energy and passion of students

The “ber” months signify Christmas festivities, but they also mean celebrations of grit and talent in cheerleading.

Last weekend’s finals of the annual University Athletic Association of the Philippines (UAAP) Cheerdance Competition (CDC) mirrored the results in 2018. The crown remains with the undefeated Manila-based National University Pep Squad with its personal best of 772 points.

The competition brings out the best of cheerleaders from the UAAP schools, as well as the sixth person in their performance— the spotter.

Typically clad in black, spotters, as the name suggests, focus on the safety of the team members during their time on the mats by keeping an eye over them as they execute their stunts.

Darwin Flores Villaluz of the University of the East (UE) is one of them.

As the UE Pep Squad jived and grooved to their reggae-theme routine, the 21-year-old Villaluz recently trended on social media for his enthusiasm and jovial support of the team members, drawing positive feedback from fans.

Unknowingly making a name for himself, he was described by netizens as a “mood,” a “supportive friend” and the “best spotter.”

The clip of Villaluz uploaded on Twitter has gotten close to 1 million views.

“I’m the type of person who’s always happy,” he says in Tagalog. “As a cheerleader, I (also) see myself as a motivator of the team because I always want everyone to be happy. It wasn’t on my mind (that I would trend).

“Everything that I do for the team is out of love. Every cheer and jump, shout I did … that was all for them.”

The broadcasting major, who is soon set to graduate, joined the UE Pep Squad in 2014. Being part of the team, he says, is a “privilege,” to represent the university.

Villaluz was also part of the phoenix-theme routine that landed second runner-up in the same competition two years ago, the team’s first time in the podium again after 15 years.

“Spotters are the motivators of the team inside (the mats) while they perform,” says Villaluz. “They’re also the ones who boost the energy of the performers. They’re also in charge of the props.

“My role as a spotter this season, I really went all out. I did everything I could do inside the mats, anything to boost and motivate them while performing. I’d shout words of motivation and praise them to keep them up and about—‘laban,’ ‘tayo lang,’ ‘kaunti na lang,’ ‘puso.’ Stuff like that.”

The team placed fifth in this year’s competition, under head coach Gibson Alegre.

“The pep squad’s coaching team wanted to focus on a chill but fun theme, since every year, we’ve always had a strong and serious one,” Villaluz says. “We feel blessed with this year’s results, and we believe that things happen for a reason. There are areas that need improvement but I am just so happy the routine turned out well and the competing members are unharmed—especially with the last pyramid. It was a winning moment that it was achieved during the competition.

“I am ultimately thankful for the UAAP—thank you that you gave cheerleaders the chance to showcase our talents through the cheerdance competition,” says Villaluz.

The UAAP Cheerdance Competition is judged on tumblings, stunts, tosses, pyramids and choreography that sum up the overall score of each team.

Accredited judges from gymnastics, dance and cheerleading organizations assess each performance based on the required skills.

The UAAP Cheerdance Competition, held at SM Mall of Asia Arena, is on its 24th year.