Astronauts and nail varnish: on the set of ‘The Crown’ | Inquirer Lifestyle ❮ ❯ 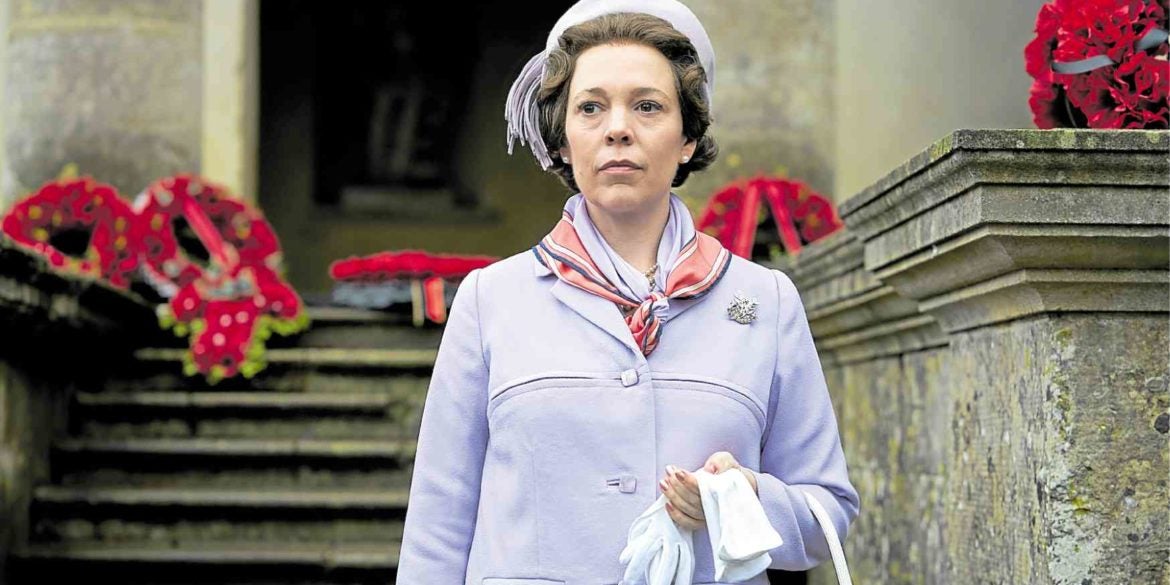 Astronauts and nail varnish: on the set of ‘The Crown’

An army of researchers, a dialect supervisor, a protocol adviser—these are just some of the many ways the people behind ‘The Crown’ make sure they get everything right

Actors playing Neil Armstrong and Buzz Aldrin handed cameras to two Buckingham Palace footmen before bounding up the stairs to join Michael Collins and their wives. We watched from a corner, away from the view of “The Crown’s” cameras.

“One, two, three,” the footmen counted.

“Cheese!” the group said in unison, smiling for the cameras, as Prince Philip (played by Tobias Menzies), looked on.

Suddenly, filming came to a halt. People huddled in groups to discuss an important question: It’s 1969—did they say “cheese” back then?

Minutes passed as people whipped out computers and discussions continued. A decision was made. “So we’re okay to say ‘cheese’?”

That was just one of the many moments we witnessed on the set of “The Crown” that showed the incredible attention to detail of the people behind the hit Netflix series. We spent the day at Lancaster House (which doubles as Buckingham Palace) with the cast and crew, watching them film the seventh episode of the third season.

Executive producer Suzanne Mackie said, “It’s a huge amount of research. We’ve got armies of researchers which has sort of grown and grown as the series has gone on. So we don’t have a writers room, we have Peter (Morgan) and then researchers.”

“The researchers dig deep. They read all the books. Everything, absolutely everything that’s ever been written about the royal family has been read and processed… It’s all factually correct, as much as possible. We are forensic about trying to achieve an actuality of the truth of events,” said executive producer Andy Harries.

Another living proof of their desire to get everything right? Major David Rankin-Hunt, the show’s protocol adviser, who has been with them since the first season. Major David, as everyone calls him, is a decorated veteran who worked in the Royal Household for 33 years. “Having been a soldier, worked in the palace, having been a herald and state ceremonial has equipped me to provide advice across a broad cross section of things,” he said.

Super asked if he had to get permission from the Palace before joining “The Crown.” “Yes, I did. It was surprisingly easy. I half-expected them to be reluctant but the opposite was the case. They seemed very pleased that I was doing it because they knew I would be punctilious and try and get it right.”

Rankin-Hunt gets sent all the scripts early. “I go through them. I’m really looking for detail, little aspects that are perhaps not quite right. I annotate them.”

He then has a meeting with the editors and directors. “We go through my comments and they will either change things or refine things or we’ll discuss if they should leave things as they are.”

He’s also on set to advise on ground, to remind them that the Queen wouldn’t say “cheers” or show them how the royal family would greet one another. He also takes note of the costumes—the medals, in particular. “There’s a whole group of people watching just to see if you get it wrong and take great delight in pointing it out,” he said.

Just that morning, the second unit of The Crown had called him. “They asked, are officers allowed to salute without their hats on? Definitely no. People get confused because they do in the American army but not the British army.”

“It’s all those little bits of detail that are in many ways unimportant and yet they add authenticity to the story that people see when being done in a particular way,” he said. “It makes such a difference in production when things are done properly… If it’s done badly, people would switch off.”

Actress Olivia Colman, who plays Queen Elizabeth II, said, “I love Major David. I just want to hug him. But he might be embarrassed.”

Bailey recalls having a long debate with the protocol adviser about “whether or not you put the tines of the fork over the knife” and learning how not to stain a glass with lipstick while drinking.

Doherty, who’s vegan, recalls that during one dining scene, Rankin-Hunt approached her about the way she was cutting her food. “He said, ‘You shouldn’t be sawing it that much. You have a limit of how many times you can… I was like, ‘how do I cut into this thing?’ I guess if you’re a vegan, you’re stuffed. But yeah, he’s literally just on set and it’s brilliant.”

Bailey said, “We don’t know what we’d do without him. Things like what do people do when they walk into a room depending on their status is even within the family…”

The people Rankin-Hunt used to work with have been watching the show. He said, “I’ve been delighted that so many of my former senior colleagues enjoy it. I think that reflects well on the production.”

Director Jessica Hobbs said, “I would say this is one of the most collaborative shows I’ve ever worked on and I think it shows.”

“Everybody’s collective desire to get it right means you don’t want to be the person that lets us all down. You’re really striving for all of the tiny details and it’s the tiny details that really communicate the characters, I think,” said Cate Hall, hair and makeup designer for season 3.

One of the biggest technical challenges of the hair and makeup team is the fact that “The Crown” shoots on such high definition. “The wigs and makeup shows up so much more so you’re really trying to transform people and alter people but within very very fine parameters of what you can see on camera and how you can conceal it,” Hall said. “My team has gone all insane basically because of the attention to detail. You can see things with these cameras that you can’t see with our eyes.”

Transforming Menzies into Prince Philip is tricky, she said. “Tobias has dark hair and Philip is a natural blonde. Because it’s such a military flat haircut, to do that with a wig and not have it look bulbous and weird is so painstaking. The way you prepare the hair underneath is so precise and we have to dye bits of his hair and the wig is blended with his hair at the nape. Tobias is an angel, thank god.”

It’s a demanding job but it’s one she enjoys. “It’s winning the lottery. I can’t imagine anything beyond this, really, that I’d want to do that’s better.”

William Conacher, the show’s dialect supervisor, is in charge of making sure that everyone’s accents and pronunciations are correct. “The younger ones always have to have the most work because the way we speak in contemporary society so removed,” he said.

He gives the cast homework so they can practice. “They have nonsense sentences that we make up together and often we’ll just have lunch and just talk in the accent. We have our little tricks. We try not to just keep rehearsing the dialogue over and over again.”

This season, he said, it’s the vowel “ow” that’s been the most challenging for the actors. “And it comes up all the time. Downing Street.”

Colman had to practice the sentence “I saw a brown mouse going round and round about.”

When Colman spoke to Claire Foy who had played the Queen in the first two seasons, she told her how incredible she was in the role. “She just said, ‘You know everyone’s there to help you and the voice department are incredible.’ And once you get all the garments on you, and the set… It all helps.”

To transform into Queen Elizabeth, Colman also had movement sessions to learn how the royal moves. “Things like the handbag is in one position on the arm while walking and it moves down and she likes to have her left hand over… It’s a special challenge to play somebody who’s still around, to play a real person that we all recognize is really hard.”

“He’s so excited when he works with me, he’s so excited, look how happy he is,” Helena Bonham Carter, who plays Princess Margaret, teased Ben Daniels who plays her husband Tony Armstrong Jones.

Daniels, who was initially skeptical about the appeal of “The Crown,” said he changed his mind after five minutes of watching the show. “It’s completely fascinating. And they do it in a brilliant way.”

Bonham Carter said, “I think people relate to it because it’s a family.”

We left Lancaster House to go to lunch, walking past 22 Friary Court, which, we were told, “is symbolically the most important of the palaces.” Catering had set up trailers outside, serving roast shoulder of pork, apple sauce roast potatoes, fresh fillet of hare, mixed vegetable tagine, sherry trifle and sponge cake with custard for the cast, crew and visiting journalists.

“King Unit,” a sign read. Tourists exploring St. James’s Palace walked past, oblivious to the fact that they were just feet away from the people who work on “The Crown.”

Actors playing palace staff were in line to get food. We spotted one of the astronaut’s wives wearing furry Uggs. Extras were eating while wearing their costumes, plastic bibs protecting their clothes. “I’m just nicking strawberries,” one of them said.

Before returning to set, we stood around, talking to Major David. He said, “They have invested so much time, money and effort in getting the right actors, the right venues, the right story lines to make it realistic. It’s very authentic. I’ve had to pinch myself from time to time that I’m not back in Buckingham Palace. And that’s good, isn’t it? That’s very gratifying.”