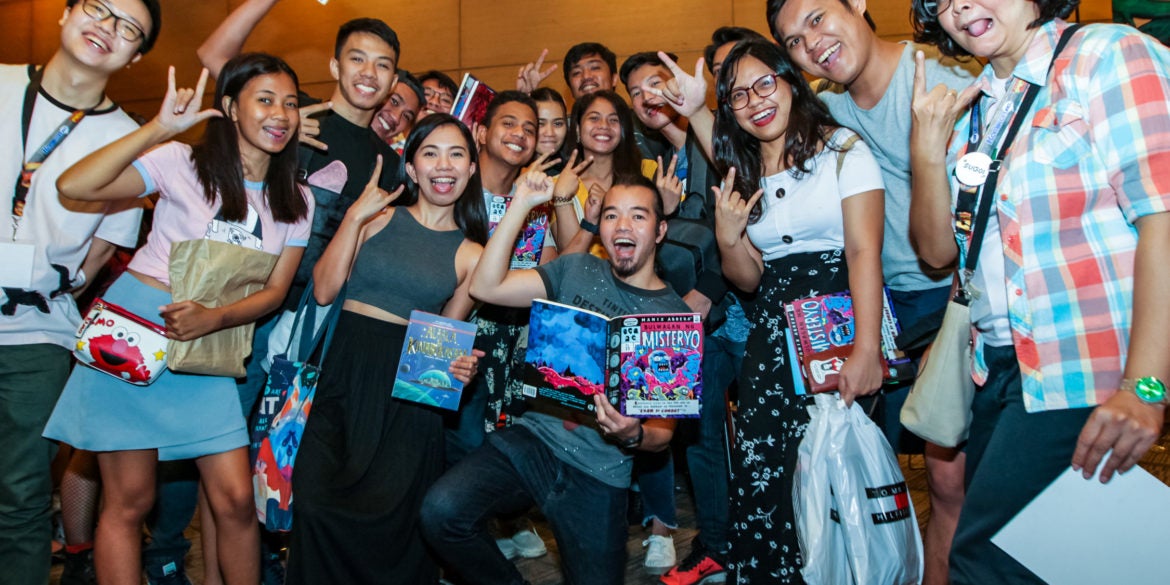 Nothing grander than Komikon Grande

Komikon is about communion. It is the most important weekend on the Philippine komiks calendar—everyone has to be there; they must participate. It was not always this way: Komikon was not always here. The first Komikon was held on Oct. 22, 2005 at the University of the Philippines Bahay ng Alumni in Quezon City, the brainchild of Ariel Atienza, Syeri Baet, Lyndon Gregorio, Len Muncal, Patrick Jungco and Jon Zamar. Its stated purpose was: “to bring together different comic books artists, groups and publishers in a venue where they could present their talents, works and services to the public and, most importantly, to aspiring comic artists.”

That ethos remained true during Nov. 23-24, when Komikon Grande: The Philippine Komiks Convention was held at its new spiritual home, the Bayanihan Center at the Unilab Compound in Pasig City.

Komikon honors the great tradition of Philippine komiks, with talks by the likes of Inquirer pioneer Jess Abrera, Rico Raval, Hal Santiago and Roni Santiago. This tradition is also evident in the work of Ian Velasquez, the grandnephew of Tony Velasquez, acknowledged as the “Father of Filipino Komiks.” In 1929, Tony cocreated the iconic “Kenkoy”; the character is celebrating its 90th anniversary this year, which is why Ian has released “Album ng Kabalbalan ni Kenkoy Vol. 1,” a collection of the classic strips just to commemorate the occasion for Komikon. “We’re trying to reintroduce Kenkoy to a new generation of readers,” he says. “He seems forgotten in this age of social media ad distractions.” Ian says they’re figuring out how to repackage the character for modern readers—Archie is the peg—but also to reproduce the 1930s vibe. Ian says they’re even in negotiations with a foreign animated company for a possible “Kenkoy” series if all goes well.

Another Komikon tradition is lining up at the Visprint booth to get the latest “Kikomachine Komix!” collection and get it signed by Manix Abrera, who still takes the time to doodle on each book. This year’s Komikon features the release of the oversize “Kikomachine Komix! Blg. 15: Bulwagan ng Hiwaga.” Manix had received the National Book Award the night before for the previous “Kikomachine” collection.

Julius Villanueva presents the next installment in his “Ella Arcangel” series with the single “Ella Arcangel: Ang Bangungot ng Barangay Masikap,” where the young mambabarang of the aforementioned barangay is called on to help a policeman who seems to be haunted by something unexplained. “Ella Arcangel” has even been turned into an animated short, “Ella Arcangel: Oyayi sa Dilim,” animated by Malonzo; the work was screened at Komikon.

Sometimes becoming a fan favorite is truly unexpected. Just ask Julienne Dadivas, better known as the comic creator Hulyen, who has been putting out “UGH,” her quirky self-published slice-of-life stories, since 2014. Komikon welcomed “UGH” # 5. The new volume includes tales of social media anxiety and high school memories. “Yes,” Hulyen says of being surprised about her cult following. “I’m just thankful people respond to it. Mostly what I do is something humorous that’s based on things that happened to me. Most of the things that happen to me are actually sad but I try to turn it into comedy. I think that’s what makes it unique and relatable to people.”

Sometimes Komikon is about a new spin. That was the case with the self-published “TRESE Deviations: IUNCTURA,” written by David Hontiveros and illustrated by Marvin del Mundo. This is an alternate reality reimagining of the “TRESE” series (coming soon from Netflix) from Tan and Kajo Baldisimo. This book imagines what it would be like if the exorcist Fr. Matthias Trese (series protagonist Alexandra Trese’s uncle) teamed up with Hontiveros’ superhero Dakila. This is planned to be only the first in a series of “TRESE” comic book crossovers.

Aside from the selling and new showcases, Komikon features screenings, panels, signings and sketchings. It highlights the presence of champions of Philippine komiks, such as the Komikero himself, Gerry Alanguilan.

Komikon is about discovery. The most anticipated release at this year’s Komikon is without a doubt Arnold Arre’s “The Children of Bathala,” book one of five books from Nautilus Comics, the sequel to 1999’s genre-defining “The Mythology Class,” and, yes, released 20 years after the original. “The Mythology Class” was the first comic book to set Philippine mythology and folklore in a modern setting, and the first to win a National Book Award.

Arre says he originally had no plans to produce a sequel. “The graphic novel was, for me, already perfect in every way and I was very satisfied with its ending,” he says. But after catching up with college friends he began thinking about the characters from the book. “I thought about them: how they are, what kind of life they may be living now, how the quests might have affected them. I also thought that going back to the fantasy story I wrote decades ago, seeing it with much more mature and discerning eyes than before—I was 25 when I wrote ‘The Mythology Class’—would be an interesting way of studying how much growth I’ve had as a writer. The moment I allowed the idea that a sequel would be possible, all of a sudden story ideas came flooding in nonstop. Around March of 2017, I had a complete outline for a story so I announced to everyone that yes, a ‘Mythology Class’ sequel was in the works.” Not only is the story bigger, but Arre’s distinctive art style is even better. Though it is steeped in the same folkloric elements as its predecessor, “The Children of Bathala” has a fantastic new hook: Like Arre and the readers of the original books, the characters have aged in real time and must deal with the not-so-fantastic problems. It’s an exciting, staggering sequel. The four next volumes will be released between April 2020 and November 2021.

“The Children of Bathala” is also a perfect distillation of what Komikon represents—originality, diversity, productivity and continuity—as a new generation stands ready to read all this. “It’s very rewarding,” Arre says. “In much the same way that, back in 1999, I wanted to make an impression on the younger generation, to introduce to them how fascinating our mythology, folklore and, most importantly, our culture is. I am fortunate to have been given the opportunity to repeat that 20 years later. The timing is perfect.”