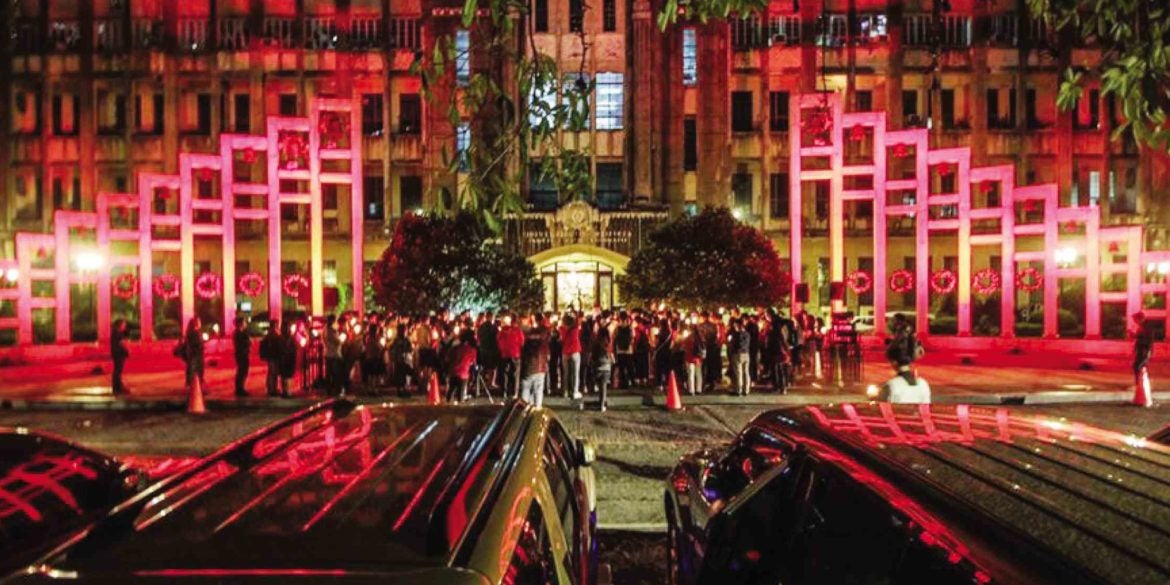 Thousands of Catholic churches, schools and other buildings nationwide were lit red on Nov. 27 to protest the persecution of Christians of all denominations across the world.

Nov. 27 had been declared “Red Wednesday” by Aid to the Church in Need (ACN), an international Catholic group that aids Christian refugees of all denominations fleeing persecutions. ACN also assists non-Christians in trouble.

People wore red and parish churches and schools and other Catholic edifices were lit red in the early evening draw attention to the plight of Christians around the world who are being persecuted for their faith.

Red is the color of Christian martyrdom.

According to studies, “Christianophobia” has worsened and Christians are the “most persecuted” in the world, particularly in the Middle East and Africa.

“Red Wednesday is only the beginning. May we continue to pray and aid our brothers and sisters in need,” he said.

At the Santisimo Rosario Parish Church of the University of Santo Tomas (UST), Manila Auxiliary Bishop Broderick Pabillo, reports the Varsitarian campus paper, urged Catholics to pray not only for the persecuted Christians remembered during Red Wednesday, but also for their persecutors.

An alumnus of the UST Central Seminary, Pabillo urged Thomasians to respond with firmness against Christian persecutions.

He said Christianity is not persecuted only by other religions but also by politicians, ideologues, and politico- economic systems.

“There are people here in the Philippines who clap their hands when the president maligns our Church leaders and our Church teachings [and] there are who just keep silent as if nothing happened,” Pabillo said.

Pabillo urged Filipino Catholics to give to ACN.

He explained giving material help to the persecuted would show the Church’s solidarity with them, he said.

“Remember that we are one body in Christ and whatever happens to any part of the body affects the whole body. Magtulungan tayo, huwag tayong magsawalang-kibo,” he said.

Those who are interested in donating may go to the ACN office at the Catholic Bishops Conference of the Philippines headquarters in Intramuros, Manila, or email [email protected]