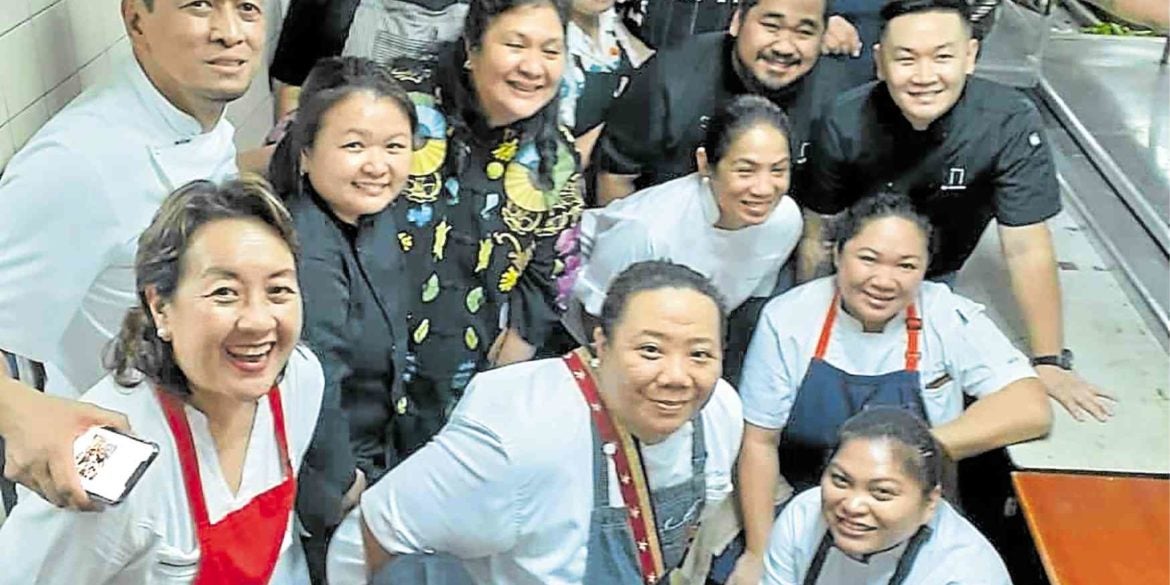 Nine chefs and their teams gave their services and dishes to the fundraiser, which bought 200 wheelchairs for Marawi soldiers

The Wheelchair Project of Dedet de la Fuente aka  Lechon Diva of Pepita’s Kitchen was the result of her and daughters Liyora and Lileya’s dream fundraisers: to provide wheelchairs for those in need, in memory of their sister Lauren, who was wheelchair-bound until she passed away at age 13.

Another round of successful fundraising dinners unfolded on Nov. 10 at the Champagne Room of Manila Hotel, with the latter joining the project.

Nine chef teams gave their services and dishes for a good 200 servings, all for free—for wheelchairs.

Dessert was from Tanya Dizon’s XO 46 Team (Ube Trio). At the bar, Aaron Limpe Aw’s team concocted three drinks: Luzon, Visayas, Mindanao. The degustacion dinner was a tour de force, held together tightly by Ed Bugia who expedited the dishes as they were served.

The guests were kept entertained and informed by both RJ Ledesma (emcee) and Dedet’s presence at the dining room. However, the best actions happened at the back of the house—the kitchen where the chefs and their teams were busy at their preps and plating as each dish was being presented to the guests.

There must have been some magic in the air because there was so much love, friendship and camaraderie that night. Teams were assisting other teams, helping with plating, garnishing, giving last-minute checks, conveying, laughing, joking, taking selfies while hurrying up.

The Wheelchair Project was “on the move” that night. And surely, no exception, hearts were touched.

Dedet’s loving project became the cause that developed  a food-to-heart connection among the players, including the special recipients from the Philippine Army of soldiers from Marawi, inspired and led by Army 2nd Lt. Jerome Jacuba.

Other supporters came from all sides, including a Cebu lechon owner from Sydney, Will Mahusay, who flew in just for the dinner to show support plus donated the collective tips of his employees, who also felt the good karma of paying forward.

The success of the dinner bought 220 wheelchairs. Each recipient will know how chefs gave them their mobility, and how they gave each chef the privilege to serve and be enriched by doing so.