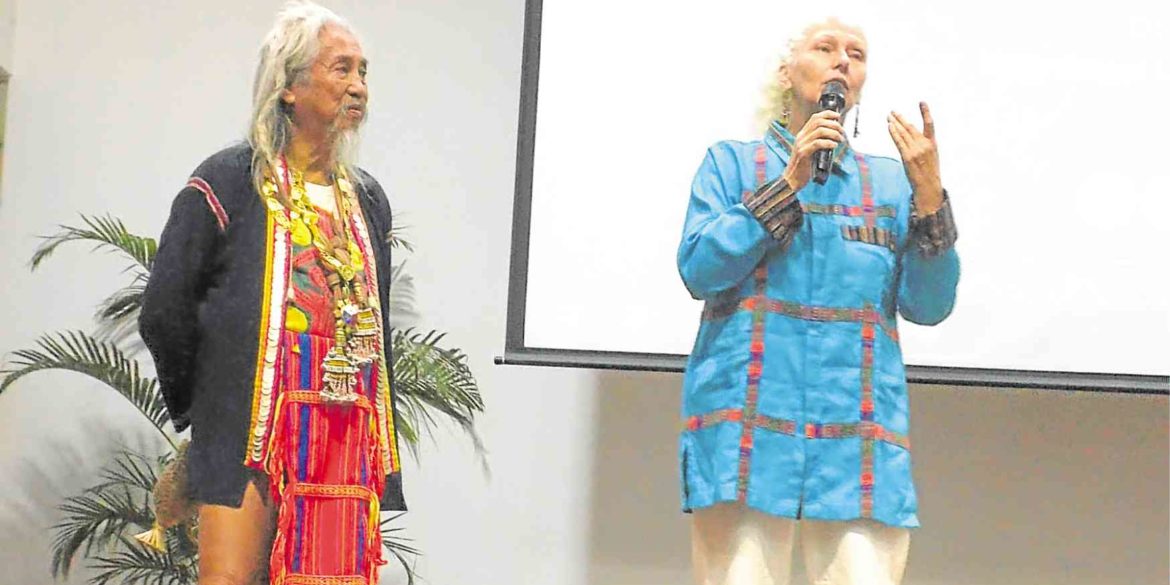 “We are wanting in research as a particular area of culture, so we are providing an area for researches to be heard. There are misconceptions that we would like to rectify, that culture is not art alone. We hope to compile and publish the works discussed here.”

The remarks are from Joseph Cristobal, director of the Philippine Cultural Education Program of the National Commission for Culture and the Arts (NCCA), as he opened the recent NCCA-organized “Bantula: International Conference on Culture-based Research” at the Holy Angel University in Angeles City, Pampanga.

A surprise speaker in the conference was National Artist for Film Kidlat Tahimik, whose wife Katrin de Guia, a scholar on the indigenous way of life, was a resource person. Caparisoned in his trademark Igorot tribal attire, the Baguio-based filmmaker said “the beautiful cultures in around Baguio City, like Kalingas, Ifugaos are being threatened. Foreign culture is still strong. I am not saying this is bad, but they tried to eliminate our culture.”

He called for a revival of Cordillera culture: “To this day, many Filipino youths still feel native culture is inferior. A lot of our practices and beliefs are still there, so why not assimilate these into modern culture? What becomes of our planet if Hollywood films with their sex and violence push aside these beautiful cultures?”

The filmmaker added, “besides entertaining, movies are the language of a certain culture.”

De Guia, who is German, observed that “you have Captain Marvel, Spider-Man, Wonder Woman but you don’t get stories of our culture. ‘Ati Ku Pu Singsing’ (a popular Pampango folk song) was an important song for revolutionaries; the ring was important for them. Kampangpangan churches are a symbol of European architecture and precolonial architecture, with love for anitos (gods) translated into love for the saints.”

James Fajarito of Holy Angel studied contemporary novels from Asia, Africa and Latin America, among these “Ilustrado” by Miguel Syjuco (Philippines), “The White Tiger” by Aravind Adiga (India) and “Death in the Andes” by Mario Vargas Llosa (Peru).

He concluded that “the main characters are overrated, overstudied. Characters are marginalized. The subalterns are the masses, migrant workers, women and indigenous people. They remain passive or fight back. The masses are oppressed while the oppressors are politicians (‘Ilustrado’). They may sometimes be more heroic than the protagonists but are naturally less articulate. They are still victims in postcolonial world.”

Fr. Ewald Dinter, SVD, spoke on the Mangyans: “Land is life to them but land is getting scarce due to land grabbing and dispossession, and increase in the population. Mangyans are still waiting for the land-use plan of the National Commission on Indigenous People. Where can they can go? What will time leave the Mangyans? The onslaught of new ideas will continue.”

On the matter of intellectual property and researches, Michael Jorge Peralta of the University of Santo Tomas said “Let people use it (your researches). Intellectual properties are not worth much unless they are used by the public. Machines… according to studies will replace you. Reading, writing will decline by 2022. Intellectual production is measured by the number of publications and patents. We need to innovate, we need to have more literary and creative workers.”

Jacob Maentz, an American photographer who documented the way of life of the Aetas and other indigenous peoples, said “Aetas are close to the land, and Pinatubo is sacred to them. Anthropologists say 70 percent of learning is through stories, while psychologists say 80 percent of communication is nonverbal. You can say that the Bible is a collection of stories. Storytelling is a way of engaging people, and we need more [storytellers].”

He added, “I have a great relationship with the indigenous people and they tell me their stories.”