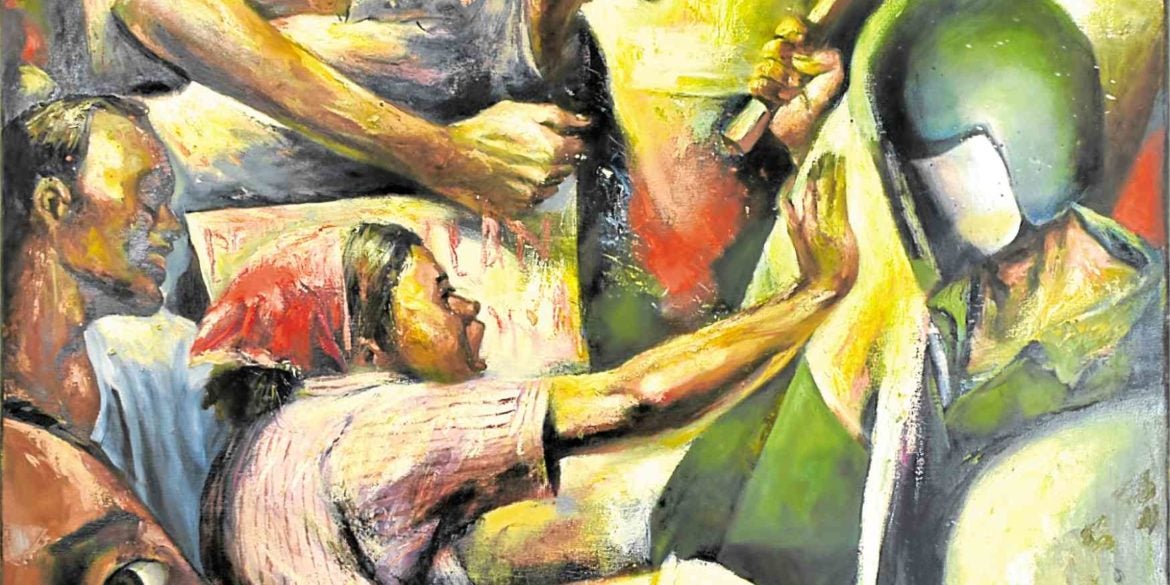 The Wish List, held at NEX Tower along Ayala Avenue in Makati, featured select pieces by National Artists José Joya, Ang Kiukok and Napoleon Abueva, and by modern masters such as Malang and Sanso and sought-after contemporary artists Rodel Tapaya and Maria Taniguchi. Also going under the hammer were rare furniture and tribal and ethnographic art.

An untitled landscape on arches paper by Justin Nuyda sold for P584,000, making it the most expensive paper sale of by the artist.

Notable sales for rare Philippine furniture included a monumental Gothic tambol aparador which sold for P992,800 and a balayong capiya which sold for P408,800 from a floor price of P130,000.

Bidding for Anastacio Caedo’s “Miguel Malvar” sculpture opened at P8,000 and ended at P292,000. The audience seemed to have felt a strong connection with the piece representing an icon in Philippine history, as well as the fact that a movie on Miguel Malvar is set to come out in local cinemas soon.

Salcedo Auctions likewise relaunched Gavel&Block with Under the Tree: The Holiday Sale on Nov. 30 at The Podium West Tower.

The contemporary subsidiary of Salcedo Auctions, Gavel&Block was created as a place for people to explore a more diverse lineup of art.

Abstract works earned top sales with an untitled oil on canvas by Poklong Anading selling at a record final price of P700,800, 17 times its starting bid, and an untitled Bernardo Pacquing 2009 oil-on-canvas selling for P560,640.

Malang continues to appeal to art enthusiasts with an untitled piece, mixed media on board selling at P1.51 million, the highest-selling by the artist for its size of just 12 x 10 inches.

Bids for a yellow gold square bracelet Patek Philippe Reference No. 3570/1j, rose to P1,051,200 from P200,000 and a fine, center second, self-winding, 18k yellow gold Rolex Submariner 300M fetched P817,600. Richard Mille, the brand known to be carried by the ultrarich, collaborated with Felipe Massa to create a limited-edition titanium skeletonized automatic tonneau form wristwatch with center seconds and date reference no.RM005 F. MASSA AG TI No. 073 of a series of 300 which sold for P2,569,600.

“The success of this sale proves that the Podium is the perfect partner of Gavel&Block by Salcedo Auctions,” said Victor Silvino, managing director. “We seek to create unforgettable experiences whether it’s through purchasing art or participating in the auction process and hope not only to bring the auction experience to a whole new set of art and design enthusiasts but also to reinforce the robust retail environment that is so crucial in the upwardly mobile, progressive direction that our country is headed.”