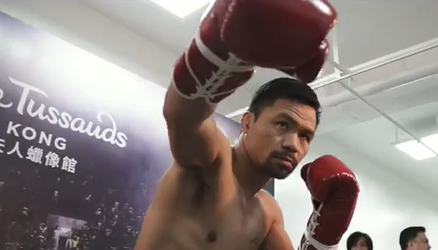 MANILA, Philippines — Boxing champ and Senator Manny Pacquiao is getting his own wax figure at Madame Tussauds in Hong Kong in 2020, the museum announced Tuesday.

“The Philippines continues to be one of our strongest markets and having Manny Pacquaio who is known globally for his achievements in sports is an honor for us. He is one personality that the attraction has been wanting to have and we cannot wait for the Filipino fans to see the figure in 2020,” Yu said in a statement.

Madame Tussauds said it took six hours to measure the boxer’s body and get the details of his facial features.

Pacquiao is the second Filipino to get a wax figure at the wax museum.

Miss Universe 2015 Pia Wurtzbach was first to get her own wax figure, which was unveiled in March 2018.