Truly, love was in the air | Lifestyle.INQ ❮ ❯ 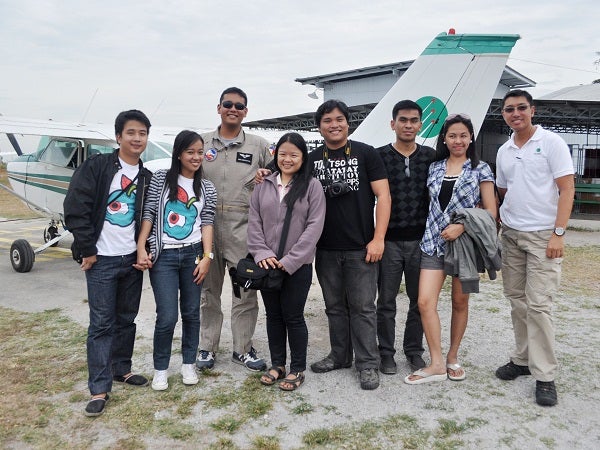 Truly, love was in the air

It was a weekend of everything that flies—colorful hot air balloons with different shapes and sizes, kites, transport and trainer planes, ultra-light aircraft and helicopters, skydivers and paragliders—filled the skies of Air Force City, Diosdado Macapagal International Airport in Clark Field, Pampanga during the 17th Philippine International Hot Air Balloon Fiesta last Feb. 9-12.

But would you believe, even “love” filled the skies of Pampanga and Tarlac that Sunday?

Love flew and was literally in the air when three couples each had an opportunity to ride a Cessna plane, a light aircraft capable of performing various aerobatic maneuvers.

Three couples— Sigrid Ganaden and Agapito Jess “AJ” Inocentes, Charity Casulla and Marc Darius Cacho and Genev Rodriguez and Janmark Garcia —had a wonderful and unforgettable experience courtesy of their winning the “Love Is In The Air” promo of the Philippine Daily Inquirer, Inquirer Libre, Inquirer Bandera, INQUIRER.net and Radyo Inquirer.

Their prizes were: free entrance pass to the Hot Air Balloon Fiesta, Cesnna plane ride courtesy of OMNI Aviation Corp., and overnight hotel accommodation with dinner for two at Widus Resort and Casino in Pampanga.

The Cessna plane ride was from the OMNI hangar to Concepcion and Monasterio de Tarlac and then back.

For all three couples, it was their first time to ride in a light aircraft. Except for Rodriguez, all of them have previously rode a commercial airplane. However, they all said this was a totally different experience because a Cessna is just a small plane.

Because the two light planes could accommodate only three passengers exclusive of the pilot, lots were drawn to determine which couple would take separate trips. Although Casulla and Cacho rode on different planes, they each sat as co-pilots and were treated to mid-air “rendezvous.”

Rodriguez, 23, and Garcia, 24, were former classmates and electrical engineering graduates at the University of the Philippines in Los Baños, Laguna. They were amazed by the view they saw while flying.

engineers. Parang kitang-kita ko na ’yung mga ginawa nilang plano na maliliit na bahay (I enjoyed it. I was amazed. I had a clear view of what’s below me. Since I am an engineer, I appreciated what civil engineers do now. It’s like I am seeing a master plan by watching those little houses [from the plane]),” Rodriguez said.

Her boyfriend added: “Nakakatuwa… Ang dami ko kasing kinuhang pictures habang nasa taas, ’yung mga land formation, ang ganda kasi (It was amazing. I took a lot of pictures while we were up in the air, the land formation, so beautiful).”

Ganaden and Inocentes, who were former colleagues in KFC, also enjoyed the flight. “Medyo nakakahilo nung pabalik, medyo masakit sa ulo, parang ang tagal kasi sa ere pero masaya. In-enjoy pa rin (It’s a little disorienting on our return trip, we felt a bit dizzy, a bit of a headache. It’s like we’ve been up in the air for so long but it’s fun. We enjoyed it,” said Inocentes.

Ganaden now works as administration assistant at HR team Asia, while Inocentes is still a branch manager of KFC.

All three couples were grateful because the Inquirer Group gave them a great and unforgettable experience.

“Sobrang ganda ng timing kaya sobrang thankful ako… Monthsary namin tapos biglang heto, may rare and wonderful experience na hindi lahat ng tao ay nararanasan (The timing is so perfect that’s why I ‘m very thankful. It’s our ‘monthsary’ and here we are, we’re having a wonderful experience that not all people will have the opportunity to experience),” Garcia said.

Ganaden, who worked as a service crew in KFC where he met Inocentes, was also surprised.

She said: “Nagulat ako kasi unexpected na magkakaroon ako ng ganitong experience (I was surprised because it’s unexpected to have this kind of experience).

MRT commuters. (I joined merely because I want to see if my greetings will come out in the newspaper. At first, I can’t believe it. At any rate, thank you and keep up the good work Inquirer! I hope you continue coming up with worthwhile contents in the papers, especially [Inquirer] Libre because it helps and entertains LRT and MRT commuters).”

After the plane ride, Inquirer booked Casulla and Cacho, and Ganaden and Inocentes for an overnight stay in the Widus Resort and Casino.

“Love Is In The Air” was a contest organized by Philippine Daily Inquirer, Inquirer Libre, Inquirer Bandera, Radyo Inquirer and INQUIRER.net.