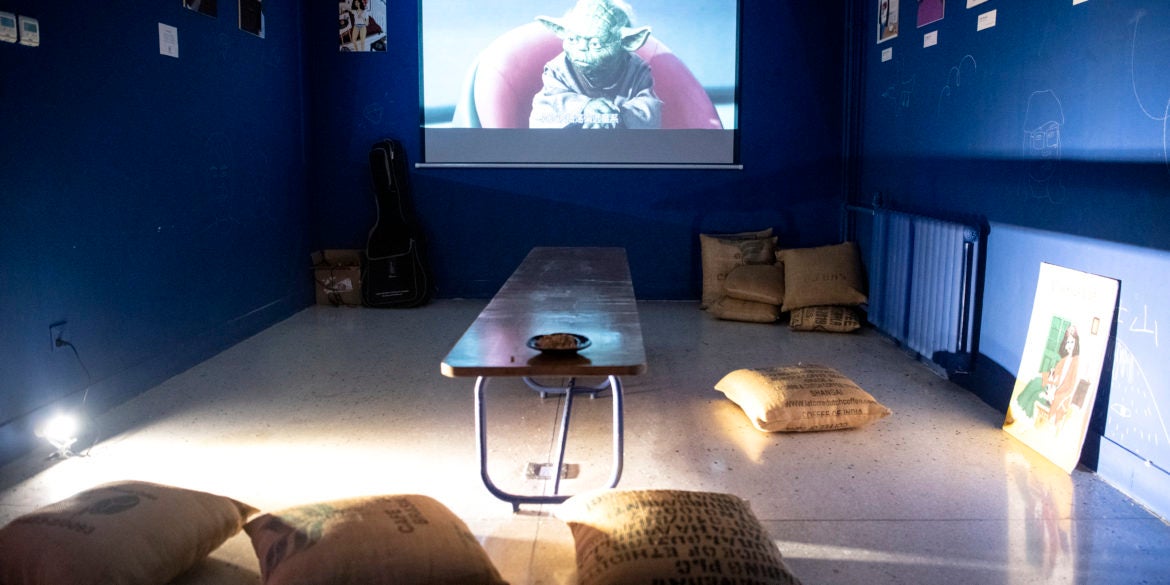 This photo taken on December 17, 2019 shows a room at a cafe that screens previously-released Star Wars films, in Beijing. - Jedi mind tricks don't work on China. While "Star Wars" fans from around the world waited in line for days to catch "The Rise of Skywalker," the sci-fi series has struggled to woo film-goers in the increasingly important Chinese market. (Photo by NOEL CELIS / AFP) / TO GO WITH AFP STORY ENTERTAINMENT-US-FILM-STAR WARS-REVIEWS-CHINA,FOCUS BY JING XUAN TENG AND LAN LIANCHAO

‘Star Wars’ struggles in a country far, far away: China

By: Jing Xuan Teng with Lan Lianchao in Shanghai

While “Star Wars” fans from around the world waited in line for days to catch “The Rise of Skywalker,” the sci-fi series has struggled to woo film-goers in the increasingly important Chinese market.

Special previews of the long-awaited “Star Wars” film in Beijing this week drew just a handful of fans.

Chen Tao is a rare superfan in a country where Friday’s opening day pre-sales were just 12 million yuan ($1.7 million), Xinhua news agency said, a fraction of the 218 million yuan taken recently on release by a Chinese-made crime drama, according to state broadcaster CCTV.

The 35-year-old Shanghai resident only became curious about the space saga by accident after stumbling across a pre-installed “Star Wars” video game on his first computer.

He loves the “Star Wars” world for its vast scale and rich detail that fans can piece together through movies, books and games.

“Its world is like a jigsaw-puzzle… which feels very magical to me, and inspires a desire to explore this universe,” he said.

But Chen and his fellow fans are rare in China, where cinemagoers flock instead to see Marvel superheroes and domestic films.

“The Last Jedi” ranked number 47 at the box office in China in 2018, far behind Marvel’s superhero film “Avengers: Infinity War” at number six, according to Box Office Mojo.

Since buying Star Wars studio Lucasfilm in 2012, Disney has stepped up efforts to gain fans in the world’s fastest-growing movie market.

“We will introduce interpersonal relations and other concepts from Chinese custom into Star Wars,” a China Literature representative told AFP, without providing further details.

The made-for-China “Star Wars” novel will have to overcome significant obstacles.

A Beijing bar hosted a screening Tuesday of previous “Star Wars” films ahead of Friday’s China release — but the special room was mostly empty.

The indifference could be explained by the fact that Chinese audiences were introduced to the series in 1999 with the prequel “Episode 1 – The Phantom Menace” — a disappointment to original fans and panned by critics.

“When Star Wars was released worldwide in 1977 it was a real film revolution,” said Steffi Noel, an analyst from Shanghai-based market research firm Daxue Consulting.

“Each new episode of Star Wars is linked to a craze, a nostalgia,” Noel told AFP.

But most Chinese viewers never formed this nostalgic bond with the movies.

In 1977, as foreign audiences were introduced to George Lucas’ Skywalker saga, China had just emerged from the chaotic Cultural Revolution and had little access to Western popular culture.

The three original films were only finally shown at a Shanghai film festival in 2015.

By the time Chinese audiences were introduced to the franchise, “the technology seemed old,” Fan Yunxin, from a Beijing-based science fiction reading group, told AFP.

“Space opera isn’t really something Chinese people related to,” Fan said, adding while she likes the films, she didn’t know of any “hardcore” fans.

Alex Hu, a 24-year-old science fiction fan, said he was unimpressed with the visual effects.

“I would say a lot of fight scenes in Star Wars are similar,” he said.

Chen said Chinese sci-fi fans tend to prefer “hard” science fiction that focuses on scientific theory and have high demands for a story’s logical consistency, but “Star Wars” was more like a “Roman empire tale that had been moved into space.”

When he first watched one of the films, he was amazed by how casually alien and human characters co-existed in the “Star Wars” universe, something he had never encountered before in a science fiction film.

“What they need to sell them now, is a new story,” she said.

“It’s not enough to include Chinese-style drawings or Chinese architectures.”

Cover image: This photo taken on December 17, 2019 shows a room at a cafe that screens previously-released Star Wars films, in Beijing. Jedi mind tricks don’t work on China. While “Star Wars” fans from around the world waited in line for days to catch “The Rise of Skywalker,” the sci-fi series has struggled to woo film-goers in the increasingly important Chinese market. (Photo by Noel Celis/ AFP)