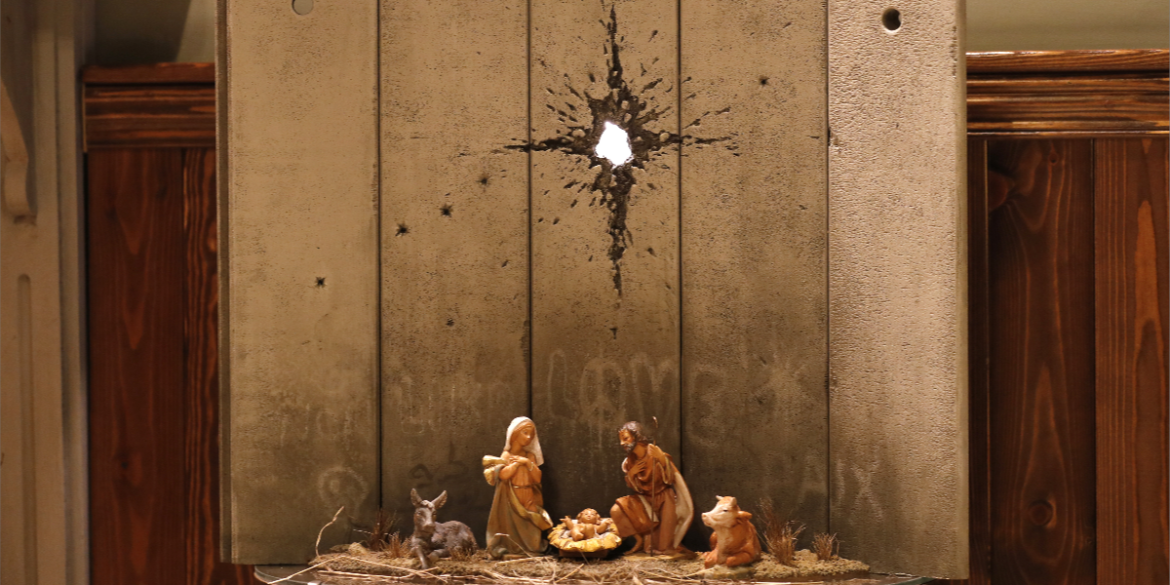 A new Christmas-themed artwork dubbed the "Scar of Bethlehem" by secretive artist Banksy is displayed at his Walled-Off Hotel in Bethlehem in the occupied West Bank. Image: AFP/Ahmad Gharabli

Dubbed the “Scar of Bethlehem,” the baby Jesus, Mary and Joseph are backlit through damaged concrete, chiseled pockmarks exploding out from a gaping hole in four directions to approximate the Christmas Star.

The work is installed at Banksy’s Walled-Off Hotel, where all rooms overlook a concrete section of the barrier built by Israel to cut off the occupied West Bank from Israeli territory.

“Love” and “peace” are respectively graffiti-tagged in English and French on the artistic installation’s concrete blocks, while three large wrapped presents are at the forefront of the scene.

“It is a nativity,” the hotel’s manager Wissam Salsaa told Agence France-Presse after the piece was installed. “Banksy has his own contribution to Christmas.”

“It is a great way to bring up the story of Bethlehem, the Christmas story, in a different way — to make people think more” of how Palestinians live in Bethlehem. Salsaa calls the Israeli wall a “scar” that should induce “shame in anyone who supported” its construction.

Israel began building the separation barrier — in parts concrete, with other stretches consisting of fencing — in 2002 during the Palestinian uprising, or intifada.

Built mostly inside the West Bank, Israel says it is necessary to prevent attacks, but Palestinians label it an apartheid wall, separating them from Jerusalem.

Traditional Bethlehem Christmas festivities will take place next week at the church built on the spot where Christians believe Jesus was born.

The manger scene and hotel — an establishment opened two years ago — are far from Banksy’s only West Bank imprint.

In 2007, he painted a number of artworks in Bethlehem, including a young girl frisking an Israeli soldier pinned up against a wall.

In 2005, he sprayed nine stenciled images at different locations along the eight-meter-high (27-foot) separation barrier.

They included a ladder on the wall, a little girl carried away by balloons and a window opening onto a peaceful mountain landscape.

Palestinian graffiti artists, too, have made the separation wall a place of political and artistic expression.

Like elsewhere in the world, Banksy’s works in the occupied territory have become tourist attractions — in part due to him often ghosting in to create his works in the dead of night.

The identity of the world’s best-known graffiti artist remains a mystery and he was not present during the revealing of his latest work.

“Banksy is trying to be a voice for those that cannot speak,” Salsaa said.

He “is creating a new model of resistance through art.”

Banksy rose to prominence after his subversive artworks started to appear in public spaces in the United Kingdom in the early 2000s, and he has long worked on themes of violence and conflict. RGA

Banksy work stolen from outside Pompidou Centre in Paris