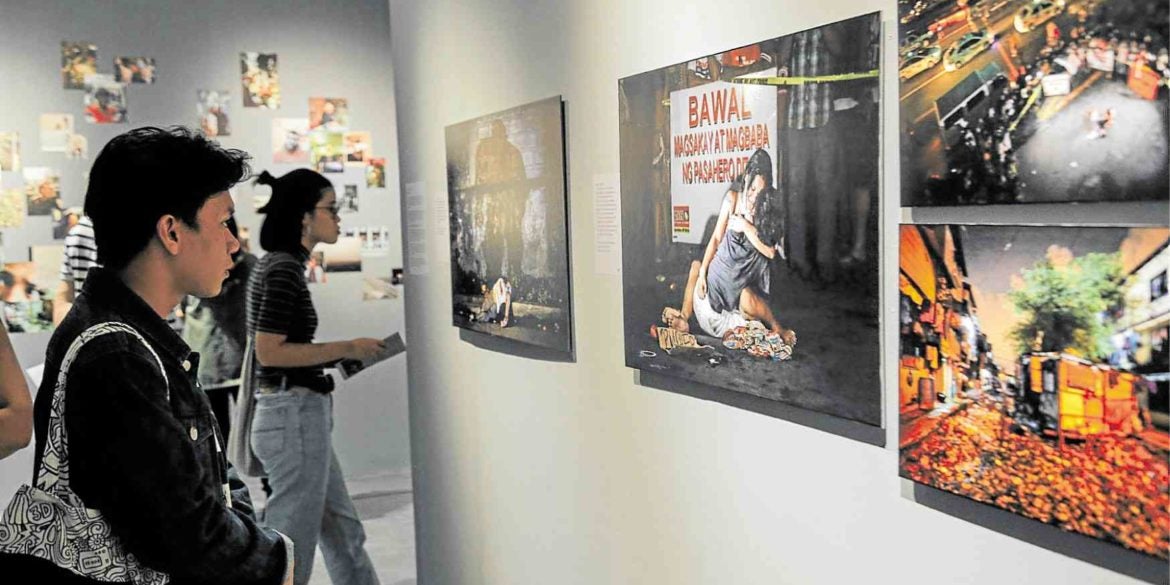 Exhibit guests check out photos of the human cost of the government’s war on drugs, including works by Raffy Lerma. PHOTOS BY ERICO DELA CRUZ AND CLEVFAN PORNELA

More than an art form, photography is a language—perhaps the dominant language of our time

In an age when the average individual is bombarded with images 24/7, and everyone with a cell phone is a photographer, does the act of photographing itself still hold any meaning?

If the work by the 31 Filipino photographers represented in “Not Visual Noise,” an ongoing exhibit at the Ateneo Art Gallery, is any indication, the answer is a resounding yes.

Curated by Angel Velasco Shaw, the exhibit’s title comes from a quote by the legendary photojournalist Susan Meiselas: “There’s so much visual noise that it’s hard to make work that is distinctive and focuses the attention of the crowd in a sustained way.”

By one count, there are 500 million images posted daily on Instagram and 1.62 billion on Facebook, not to mention the rest of the internet, television and other mass media, billboards—all competing for our shrinking attention span.

“The exhibition’s central questions are—what is the role of the photojournalist, documentary and contemporary photographer, and a multimedia artist in a media-saturated world?” writes Shaw in her introductory essay.

“How do these creatives represent the social and cultural issues that concern them?”

Judging from the diversity and depth of the work presented in “Not Visual Noise,” there are as many intentionalities and aesthetic approaches as there are individual photographers.

The exhibition space in the Soledad V. Pangilinan Arts Wing of the Ateneo Art Gallery is laid out in the shape of a brain, perhaps to emulate our image- saturated visual cortex.

The not-so-subliminal message is that, more than an art form, photography is a language—perhaps the dominant language of our time.

Eye of the beholders

Apart from traditional photojournalists and long-form documentarians, there are visual artists who incorporate photography in their work, filmmakers who occasionally work with still images, and conceptual artists who combine photography with other media in their creations.

“The reasons for taking photographs of specific content and contextualization utilizing a combination of technologies varies from image maker to image maker,” Shaw writes.

“It is in the eye of the beholders to determine if such imagery contributes to visual noise or not, is a form of artistic practice, or spans the categorical compartmentalization and outward appearances of homogeneity. Photography as non-static visual language is heterogenous and evolutionary in its functionality, meanings and messages.”

Nevertheless, the visually literate viewer can probably detect several subthemes going on within the exhibit itself.

The strong tradition of socially engaged documentary is well-represented in the photographs of the human cost of the government’s war on drugs by Raffy Lerma, Ezra Acayan and Kiri Dalena; Tommy Hafalla’s elegiac portraits from the Cordilleras; and Carlo Gabuco’s photographs of the persistence of the Marcos cult in the deep Ilocos.

The perspective of the Filipino diaspora is represented by Rick Rocamora’s photographs of effects of 9/11 on American Muslims, and Emmanuel Santos’ photographs of the descendants of the victims and survivors of the Holocaust.

The cross-fertilization of photography and the visual arts can be seen in the work of BenCab, Kawayan de Guia, Kidlat de Guia, Neal Oshima and Nap Jamir.

Some of the artists attempt to overcome the limitations of the single image by using different strategies: Veejay Villafranca’s use of lenticular printing to produce 3D images, MM Yu’s photographic installation, Lawrence Sumulong’s revival of stereoscopic images using the View-Master toy, At Maculangan and Marta Lovina’s use of video.

In a class by itself is Stephanie Syjuco’s continuously projected loop of every image in her computer’s hard drive —5,118 in all—basically a visual representation of a year in her life.

“It still makes a difference when the photographer wants to say something,” says Shaw. “So far, I haven’t heard anyone say that this exhibition was ‘noisy.’”

Born in Los Angeles and raised in New York, Shaw attended the California Institute of the Arts. She started reconnecting with her Philippine roots in 1985, just before the fall of the Marcos regime.

Curating the “Not Visual Noise,” she says, made her “connect the dots in my life’s work as visual artist, media artist, educator, organizer and curator.

She arrived in Manila at a time when Philippine art was in transition from modernism to postmodernism. Apart from meeting visual artists such as Agnes Arellano, she also connected with photojournalists such as Ed Santiago and Alex Baluyut, and hung out with them at their Malate watering holes. While attending a film editing class at the University of the Philippines Film Institute, her teacher took her to the rallies that eventually led to the People Power revolt.

“These were moments that changed my life,” she recalls.

In 2013, she moved to Manila in order to spend more time working on art projects here.

In 2018, she cocurated with Oshima the well-received “Provocations” photography section of Art Fair Philippines, which might be seen as a precursor of “Not Visual Noise.”

“I come out of this whole history which is very much tied into this exhibition,” she adds.

Among other things, “Not Visual Noise” also seeks to address the divide that exists between the older practitioners who are rooted in the traditional forms of photojournalism and documentary, and steeped in the old technology of chemically developed film and paper, and younger photographers who are digital natives and have never inhaled stopbath and fixer fumes in a darkroom.

Eventually, Shaw intends to develop a multimedia storytelling course based on “Not Visual Noise,” not necessarily for art majors but for students in anthropology, sociology, history and other social sciences.

“I’m happy with the way [young] people are responding to the exhibit,” she says. “Their eyes are opening. They’re like, wow, these are our people! These are Filipinos!”