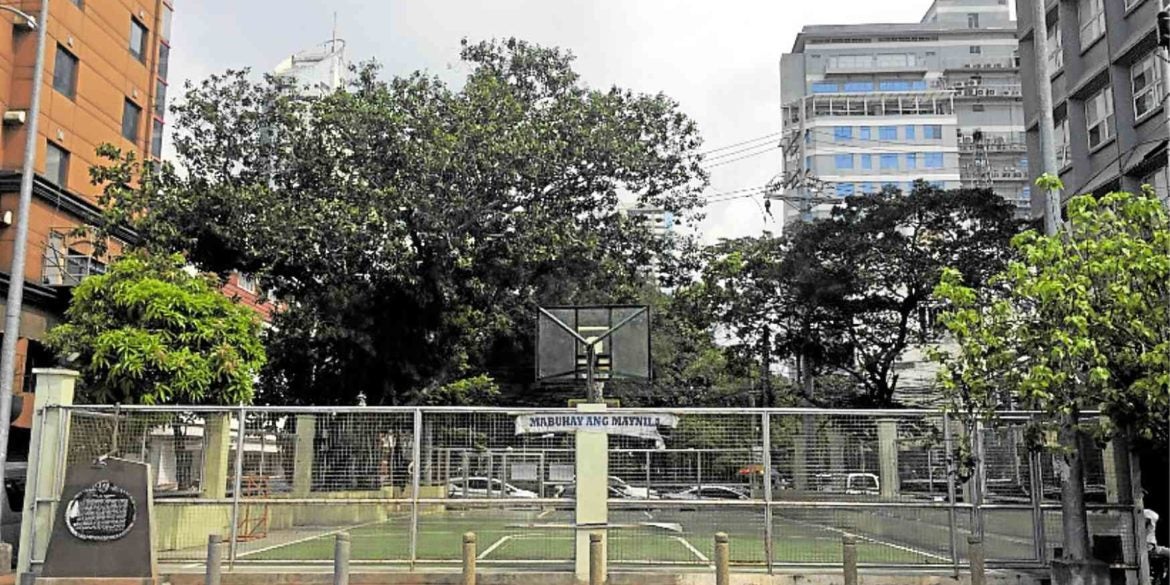 A basketball court has been constructed at the Plaza Ferguson in Ermita, Manila, despite a directive against it by the National Historical Commission of the Philippines (NHCP).

The area located in front of the Ermita Church is also called the Ermita Plaza and the Plaza Nuestra Señora de Guia, renamed after Arthur Ferguson, the executive secretary of the Philippine Commission during the early 20th century.

Initially, the plan late last year was to construct a multipurpose building which would replace the old basketball court in the area of the plaza near Roxas Boulevard.

The multipurpose building project was proposed under the term of Barangay 667 captain Manuel Mendoza and approved by the city government under Mayor Joseph Estrada, said barangay secretary Susan Pagaduan.

She added that since the NHCP issued a cease-and-desist order (CDO) against the multipurpose building late last year, the site was converted back to a basketball court by the current captain, Margarita Mendoza Clemente.

Pagaduan said the basketball court, which she said was approved by the NHCP and would also serve as a recreational site and evacuation center for the local residents, was constructed by the current captain.

In October last year, the NHCP issued a CDO to then Mayor Joseph Estrada, saying the “Ermita Plaza is a historic Plaza dating from the establishment of Ermita as a barrio of Manila” and must be protected from any modification and alteration since it is a presumed important cultural property under the heritage law.

Also, the historical agency had declared all Spanish and American colonial plazas and public squares in the country as National Historical Sites as per the 2018 Resolution No. 7.

A series of correspondences by the NHCP, the Department of Public Works and Highways (DPWH), the National Commission for Culture and the Arts and Barangay 667 chair Clemente starting from November 2018 to April this year reveals that the NHCP order to “preserve the entire plaza, keep it open, and accessible to the public.”

The NHCP did not approve the construction of the basketball court after the multipurpose project was shelved following the CDO but approved the replacement of the damaged flooring.

NHCP chair Rene Escalante advised in the communications that the multipurpose building can be constructed elsewhere and said the plaza should remain open without barriers.

He also directed the DWPH and the village chair that the installed marker for the diplomat and writer León Ma. Guerrero should stay where it was installed and should not be relocated.

But the NHCP orders were not followed since the enclosed basketball court was completed and the Guerrero marker was relocated few feet from its original location.

Long advocating for the protection of civic spaces such as plazas and parks since these are intended for public use, urban planner and architect Paulo Alcazaren said these sites should be preserved and should remain open spaces.