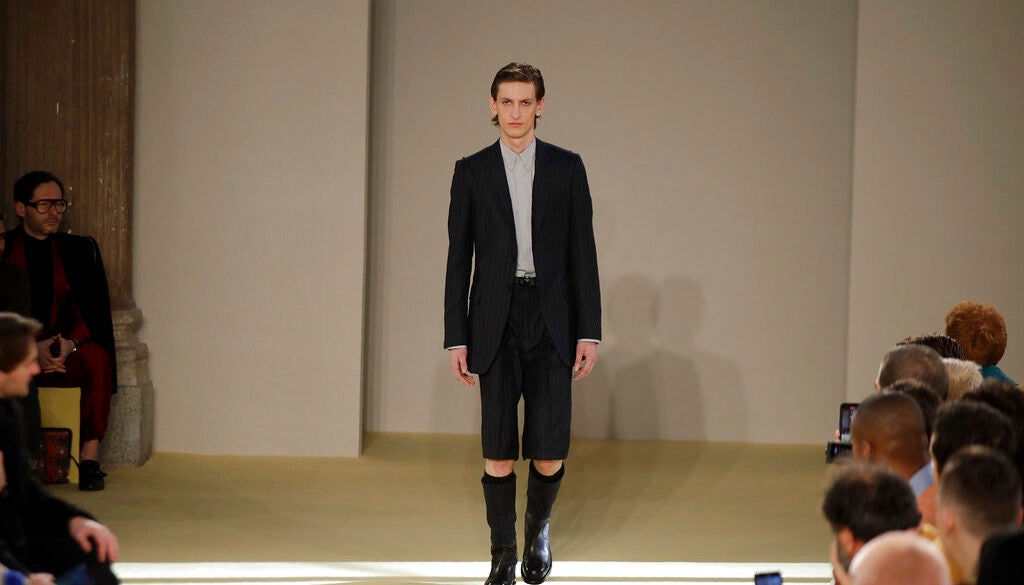 A model wears a creation part of the Salvatore Ferragamo men's Fall-Winter 2020/21 collection, that was presented during the fashion week, in Milan, Italy, Sunday, Jan. 12, 2020. (AP Photo/Luca Bruno)

Milan designers consider menswear for the next decade

MILAN — Milan fashion designers were taking a step back as they consider the import of presenting their first collections of the 2020s.

The last decade marked a blurring in gender roles and also the rise of high-end streetwear.

Anyone looking back at past decades will see how they softly blur one into the other. As seen on runways this season, Milan designers seem to be solidifying the gender-bending trend while maintaining a strong line of masculinity. Streetwear might not fare so well. While high-end sweatshirts, leisure trousers and sneakers did much draw the attention of younger generations, many established designers see it as an assault on luxury that must be held at bay.

As designers explore new trends, there was considerable role-playing on runways previewing mostly menswear for Fall/Winter 2020/21.

To a fashion crowd in arena seating above surreal piazza featuring a cut-out 3-D equestrian statue, Miuccia Prada presented workmanlike looks in clean neutrals with just a flash of color for her first collection of the new decade.

Prada said she wanted to give a message to young people in an era of confusion “that the only thing that makes me calm, relaxed and optimistic is to give value to work.” And, she said, to give value to things that are durable.

Durability has become a political statement in an era when sustainability is becoming an everyday word in the luxury industry. “It is incredible that in one year it became kind of a normal thing,” to ask if a collection is sustainable, Prada said. This one included sustainable nylon and cotton, she said, promising more.

The collection fit the overall Milan trend toward formal wear, with Prada’s targeting the working man as an ideal of an everyday hero. It featured overcoats cut just a little broadly, slightly cropped or car-coat length. Geometric patterns on silk scarves peeked out of necklines.

The graphics, echoed in the geometry of the show space, burst out on knitwear with a Nordic flair. Tailored trousers were anchored under shoes with straps or tucked into knee-high leather waders.

Neckties gave another flash of color, often in red. The collection featured few adornments, and bags were functional attaches or overnight bags.

The runway show ended with the models converging across the center of the piazza in apparent chaos, before neatly dissipating. Prada was reluctant to offer a forecast for the coming decade, expressing hope that the world is not “on the abyss of war.”

Simone Rizzo and Loris Messina invited the fashion crowd to the studios of the regional television station Telelombardia in Milan’s periphery to inject a note of realism to the runway show. Guests passed the control room with its array of screens on the way to the studio show space, with risers arranged in the square as if around a boxing ring.

Flashing lights offered just a glimpse of the looks with a focus on silhouettes, from big A-line coats to slim-fitting ribbed knitwear for her and oversized suits with short pants for him. When the runway show was over, models stopped to over a closer look at the garments: Beautifully detailed hand-crocheted coats with a vintage feel, a shimmering emerald green satiny tunic with golden button details, and a minty olive blouse with ruffles and pearl detailing.

“The collection is the maximum expression of our last intense months,” said Rizzo, who with his partner Messina founded the brand in 2015. He said the tensions are the result of the struggle to thrive as an independent brand, while keeping alive other projects, including an upcoming collaboration with Valextra and the artistic direction of an outdoor gallery beneath a disused overpass where they showed in June.

“There is a rollercoaster of color, volumes and shapes,” Rizzo said.

The new Salvatore Ferragamo collection had touches of femininity against a canvas created from six very masculine archetypes.

In one iteration, a softer Japanese surfer trouser combined with relaxed knitwear and lug-sole boots. Soft pastel shirts were worn with suits, some with trousers, some with Bermuda shorts and some with both, layered one over the other. A converted camera bag was carried firmly on one shoulder, like a purse, contrasting with more masculine duffel bags.

Ferragamo’s creative director Paul Andrew said he wanted to appeal to younger generations — while maintaining an awareness that the Ferragamo brand appeals to consumers of all ages. His archetypes:sailor, surfer, soldier, race car driver, biker and businessman.

“I feel like the way that millennials are dressing today, it’s much more about mixing these very classic archetypes of men,” Andrew said backstage after the show. “Some of them are masculine, some of them more at ease with their femininity and mixing it all together. … There were tiny touches of feminine, a little bit in the colors.”

Andrew the collection, titled “Metamodern,” had taken a hard turn into the new decade, with a fresh direction, imbuing in menswear “the power held by clothing that is much more relished in womenswear.”

The red leather gloves of a killer. Hazy patterns as if a foreboding forest on a mohair sweater. Bold prints of flesh-eating plants.

‘’What comes out in this collaboration, more than the garments is his love and his passion for beautiful things, absurdly enough,’’ said Giorgetti, who describes himself as a huge horror film fan. Argento ‘’is obsessed with color, from red to black to violet. It was also a learning process on how to create colors.’’

Argento brought to the table his movie posters, including “Cat O’Nine Tails,” “Phenomena” and “Suspiria,” which became the inspiration for prints. But he also conveyed the notion of a world “that is part good and part bad, part light and part dark,” enveloped in the collection’s mix of classic tailoring and more relaxed looks.

The runway show was held under spooky red lights, with a sing-songy soundtrack from Argento’s films.

The director’s humor comes through in prints of monsters giving their middle fingers. Black denim has been washed and dyed red, to give the effect of being blood-soaked. Simple overcoats have flashes of eerie green and blood red. Printed shirts are layered over each other.