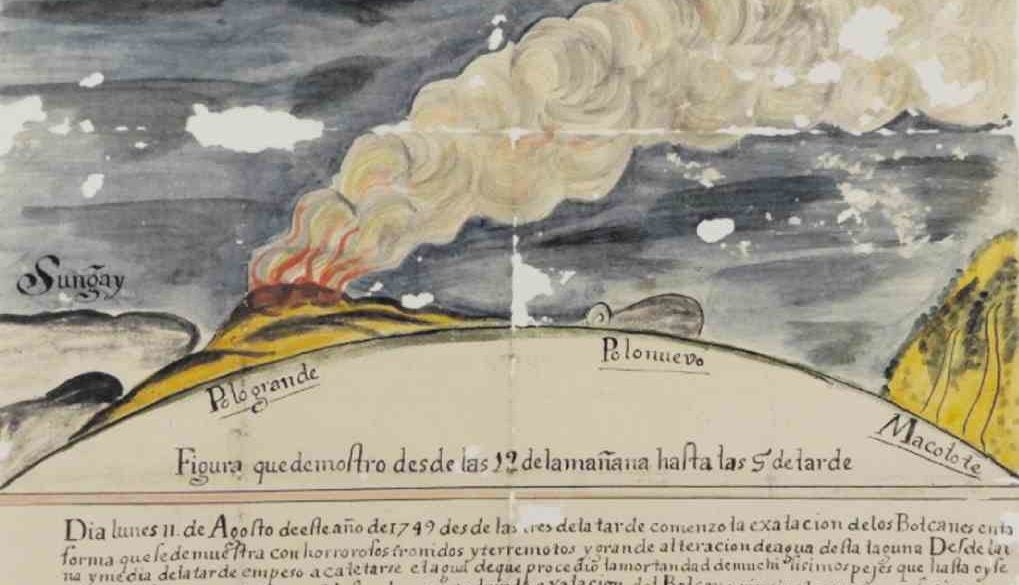 1750 watercolor painting of 1749 eruption from Archivo Franciscano Ibero-Oriental showing “what happened from 7 in themorning to the afternoon” of Aug. 11: “Mount Sungay, the erupting Pologrande (Big island) and Polonuevo (New island) and Macolote (Mt. Maculot).” IMAGE FROM THE ARCHIVO FRANCISCANO IBERO-ORIENTAL

Watercolor drawings from the Franciscan archives in Madrid depict the 1749 eruption that blew off Taal’s conical form, creating today’s lake crater where volcanologists say a major eruption may happen any time

Watercolor drawings from the 18th century found in the Archivo Franciscano Ibero-Oriental (AFIO) in Madrid depict the 1749 eruption of Taal Volcano that blew away its conical form, leaving what we know now as the crater lake.

The same crater is where a major eruption may happen any time, according to government volcanologists.

The images were shared with the Inquirer by church historian Regalado “Ricky” Trota Jose, archivist of the University of Santo Tomas (UST).

The 1749 eruption may have signaled the more famous and cataclysmic one in 1754, which lasted six months, altering the ecosystem and resulting in the movement or transfer of towns.

Prior to 1754, Taal had erupted 18 times in recorded history—from 1572, the year the town of Taal was transferred from a place called Balagon (also Balangon), up to 1749, when Taal was in the present-day lakeshore town of San Nicolas.

San Nicolas still has the ruins of the old Taal Church from the 1754 eruption.

That eruption resulted in the transfer of Taal to its present location.

When Taal was founded by the Augustinians as the first Christian mission in Batangas in 1572, it had Balayan and Bauan as visitas (mission stations).

The towns now of Lemery, Agoncillo, San Nicolas and Sta. Teresita were also part of old Taal before they became independent in the 19th and 20th centuries.

The volcano’s eruption in 1754 should be particularly notable since it altered the ecosystem of the once inlet of Balayan Bay, now called Taal Lake.

That inlet was connected to the bay by a wide channel, which was reduced to a river (Pansipit) after the eruption, thereby blocking the flow of saltwater to the inlet.

As a result, saltwater species such as tawilis (a kind of sardine), maliputo (mackerel), sea snakes and other marine species evolved as endemic freshwater species that can only be found in Taal Lake.

Due to the eruption, the town of Tanauan moved from its site to what is now Talisay to the town of Sala to the east, and to its present location—all in 1754.

The new town of Tanauan was formed together with Sala which was also devastated and abandoned.

In September 1754, Fr. Francisco Bencuchillo, the Augustinian parish priest of Sala who was in Taal during the eruption, described that “the fire emitted was quite extraordinary and accompanied by terrifying rumblings.”

“The strangest thing was that within the black column of smoke issuing from the volcano ever since June 2, there frequently formed thunderstorms, and… the huge tempest cloud would scarcely disappear during two months,” he said, as quoted by Thomas Hargrove in the now ubiquitous book, “The Mysteries of Taal.”

In his visit in Taal, December of 1754, Father Bencuchillo noted that what remained of the old church complex were the walls of the church and convent.

Ruins of the church from the cataclysmic eruption can still be seen in the old Taal—today’s San Nicolas.

The former Taal Church was particularly interesting due to the construction materials used aside from coral stone blocks—pieces of round brain corals and other coral types sourced from the then saltwater inlet now lake.

Aside from this church, the old churches of Tanauan and Sala (now a barangay of Tanauan) were also ruined by the 1754 eruption. Tanauan ruins are located in what is now Club Balai Isabel resort in Talisay while the ruins of Sala are in a place called Bañadero in Tanauan.

Before 1754, Taal had erupted numerous times in the first half of the 18th century and the eruption of 1749 that lasted up to early 1750 was likewise historic.

Father Bencuchillo, the same friar who gave an account of the 1754 eruption, was parish priest of Sala at that time and left an account.

In his account, the Augustinian said he was worried of the strong light he noticed on Volcano Island on the evening of Aug. 11, 1749.

Explosions woke him at 3 a.m. and he said he thought there was thunder but since the sound became louder, he thought it was a volley of fire from a passing galleon on Balayan Bay.

It was customary at that time to fire a volley as a salute to Our Lady of Caysasay whose shrine was in Taal.

He wrote that he observed a number of shots so he thought there was a naval battle offshore.

Shortly later he realized Taal was erupting, and he noted an immense smoke column with “pillars of sand” rising from the lakeshore in Sala.

After almost a month of eruption, Father Bencuchillo wrote (in the translation by Hargrove): “… the lands of Tanauan and Sala shifted. Streams found new beds and took other courses, whilst in several places trees were engulfed in the fissures made in the soil. Houses which one used to go up into, one now had to go down into, but the natives continued to inhabit them without the least concern… The entire territory of Sala and part of… Tanauan have been rendered practically unhabitable.”

The composite images of the 1749-1750 eruption are kept in AFIO in Madrid.

UST archivist Jose showed to the Inquirer the photographs he took of the watercolor paintings from AFIO and provided the translation of the texts accompanying the images drawn in 1750.

The first image “showing what happened from 7 in the morning to the afternoon” of Aug. 11 indicates “Mount Sungay, the erupting Pologrande (Big island) and Polonuevo (New island) and Macolote (Mt. Maculot).”

The image below it, which has a longer caption, describes what happened from 12 noon up to 5 p.m. on Aug. 11.

Smoke started to rise from the volcanoes at 3 p.m. and that “there was much horrible thunder and earthquakes and great changes of the water in the lake.”

“From 1:30 in the afternoon the water started to heat up, which resulted in the death of so much fish, which until today clutter the lake.”

“Up to the present smoke belches from the principal volcano; although much more quiet, there are still many tremors.”

“Up to now there is no news as to what happened to the towns of Lipa and Sala; what has been perceived in this capital [Taal] is that the towns and the rice fields suffered much damage.”

Jose said the watercolor images are important since they detail the Taal eruption prior to 1754.

Jose said the notes are by a “Manuel Magno de Valenzuela.” The UST archivist noted that De Valenzuela was not a friar. “We don’t know if he was an indio, or Spaniard, just that he was a layperson,” said Jose. “Take note also that the volcano was observed from Taal, that is, old Taal, meaning San Nicolas.”

Jose added he would not rule out that De Valenzuela painted himself the images.

Jose said he could not explain why the images ended up in the Franciscan archives in Madrid. Batangas was an Augustinian mission.

Jose said that he perused the catalog of AFIO and there was no other document on Taal. “It goes to show that a researcher must look into unlikely areas to find his data,” the UST archivist noted.

With the continued unrest of the volcano, a team from the National Historical Commission of the Philippines (NHCP) recently rescued movable collections on exhibit and housed inside their museums in Taal town—the Museo nina Marcela Mariño at Felipe Agoncillo and Museo ni Leon Apacible, according to the NHCP.

Like its neighboring towns, Taal suffered from the volcano’s wrath. Ashfall has blanketed Taal and other towns and damaged several ancestral houses.

The frequent volcanic quakes also pose danger to heritage structures which include the Taal Basilica, the largest in Asia.

In fact, the 17th-century church of Virgin of Caysasay, otherwise known the Minor Basilica of St. Martin of Tours of Taal, located just off the Poblacion site, suffered cracks because of ground movements.

Due to this unfolding event, heritage experts have noted the lack of heritage risk management procedures in the country.

NHCP chair Rene Escalante told the Inquirer that his agency has “no formal procedures” but assured the public that the NHCP’s assets are all insured.

He added the cultural properties rescued in the Taal museums were brought to the NHCP’s main office in Manila for proper safekeeping.

Meanwhile, sources from the cultural sector said the National Commission for Culture and the Arts has no heritage risk management system in place. The Inquirer has yet to receive a response from the National Museum on the matter.