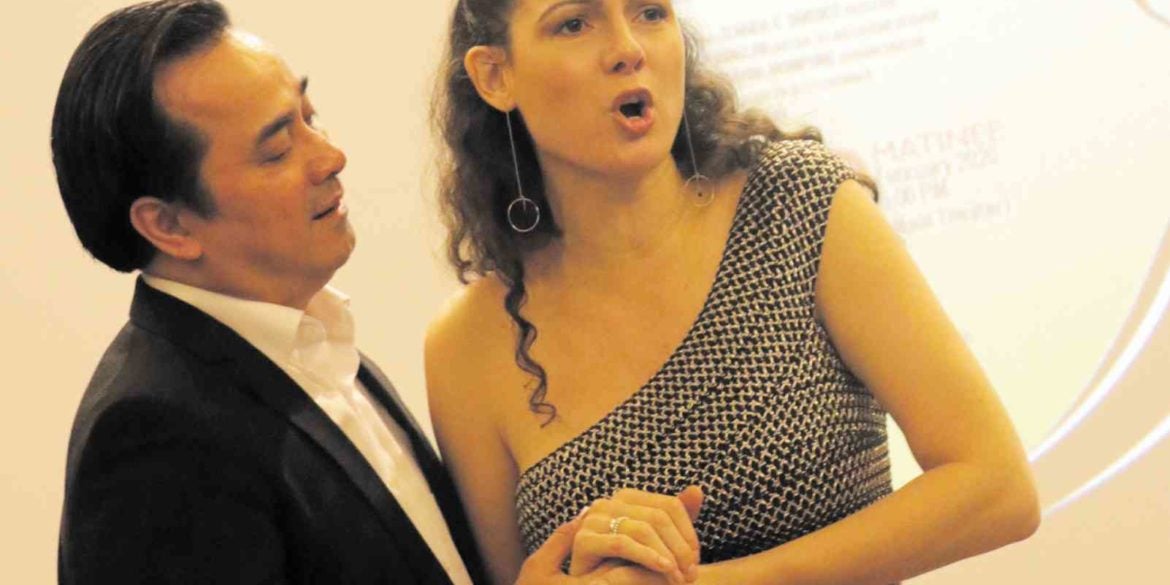 Out of the blue, tenor Arthur Espiritu has become the most sought-after Filipino singer in the international opera circuit singing lead roles right and left.

The first Filipino tenor to sing at the highly revered La Scala di Milan in Italy, Espiritu will sing his second Edgardo in Donizetti’s “Lucia di Lammermoor” on Jan. 31, 8 p.m., and Feb. 2, 3 p.m., at the Cultural Center of the Philippines.

It his third full-length opera at the CCP after “La Traviata” (Alfredo) and “Barber of Seville” (Count Almaviva). Outside of CCP, he did the full-length concert version of Rossini’s “Cenerentola” to great acclaim under the baton of Darrell Ang.

Espiritu’s Lucia is French-Armenian soprano Melody Louledjian who is making her Manila debut.

Looking back, he didn’t expect to be doing a lot in Manila after moving to America for his studies. “I’ve always wondered if there is a slot for me in Manila’s classical music scene after being away for many years. I realized that there was! It felt good to get applause and acceptance from your countrymen after my first ‘Traviata’ and ‘Barber of Seville’ in Manila. My first ’Lucia’ in Manila is special for me because I am working with people who really love and support this art form.”

He finds the role of Edgardo as a polarizing character. “Not only is he a noble man but a man of honor. Unfortunately, he has lost more than he could bear. His family is in ruins from the result of an ongoing feud with the Ashtons. He lost his father as well and found himself head of the family. A man who wants to serve his country faithfully but he also has a secret undying love for Lucia. He feels like he is an outsider in his own country. He is also a character with so many things in his mind that feels overwhelmed and sometimes faced with insurmountable odds. Will he be successful at negotiating terms with France for his country? Will he finally be recognized as Lucia’s rightful love? This is all weighing down on his heart and soul. It is a complicated situation being presented to a reasonable, noble and honorable man.”

He admits it is a vocally demanding role. “I have done my fair share of bel canto roles and this role I must admit is quite unique. It has no thrilling super high notes to be exciting. True, it has a lot of high notes. It has to have pathos in the voice and a hint of verismo in the intention of the character that has to come out of the sound. This is what makes Edgardo a great challenge for the voice. Just because you can sing high notes does not mean you will be successful in this opera.”

In the production is the live accompaniment of the Philippine Philharmonic Orchestra under the baton of Maestro Alessandro Palumbo while Vincenzo Grisostomi Travaglini directs with Ravivaddhana Monipong Sisowath as assistant director, Giovanni Pirandello as lighting director and Giampaolo Lomi Ormanni as creative project coordinator.

Thus far, the rehearsals are doing very well under director Travaglini with Prince Ravivaddhana Monipong Sisowath as his assistant director. “They have both worked with many important artists on the international stage. They bring so much experience and new energy into the production.”

He finds her second Lucia to be generous with her energy and work ethic. “Melody, is a kind, smart, and sensitive person. I admire her enthusiasm and multifaceted capabilities. For another, she is very easy to work with.”

After “Lucia,” Espiritu will make his role debuts for Romeo in Gounod’s “Romeo et Juliette” and later on in the year as Riccardo (Gustavo) in Verdi’s “Un Ballo in Maschera.” “I’m very excited and very scared at the same time. This is such a major shift for me vocally. You never really know what will fall on your lap during a season. I will keep myself open to possibilities.”

The good news is that he will make his grand debut with the Concertgebouw in Amsterdam as part of its summer concert series on July 10.