Do your own BTS tour of Seoul—it’s a great time to be Army | Lifestyle.INQ ❮ ❯ 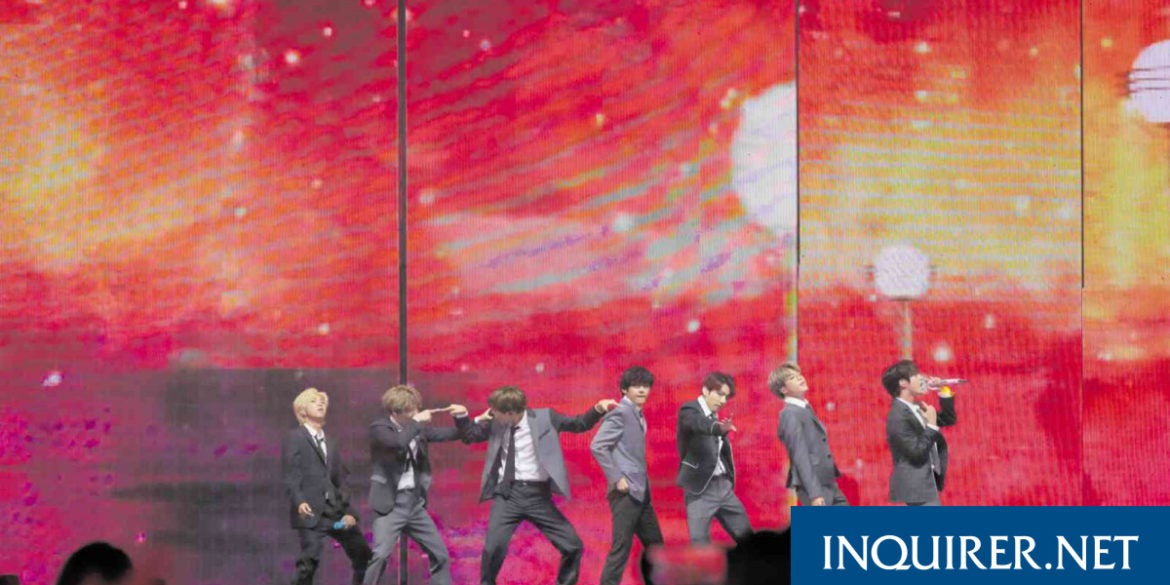 BTS, the biggest boy group in the world, performs their hit single, “Boy With Luv,” at the Melon Music Awards in November 2019.

Who would’ve thought that when it debuted in 2013, Bangtan Sonyeondan, or BTS—comprised of Kim Namjoon (RM), Kim Seokjin (Jin), Min Yoongi (Suga), Jung Hoseok (J-Hope), Park Jimin (Jimin), Kim Taehyung (V), and Jeon Jeongguk (Jungkook) —had to fight for its place in the crowded K-pop industry?

But BTS’ fans, collectively known as Armys, have always believed in the boys.

Today, BTS members are global superstars who have transcended the boy band image to become innovative, daring and revolutionary artists —with a following that’s exponentially growing the world over. (Watch the group at the Grammy Awards on Jan. 27.) They constantly surprise and excite Armys with their projects and performances, never shortchanging their global audience.

And it’s fascinating how the bigger BTS gets, the more intimate its relationship becomes with fans. The boys reach out to Armys whenever they could, spending time on Weverse, a Twitter-like platform, and V-Live, a streaming service, for real-time conversations. “Army” is part of the boys’ daily vocabulary.

Armys’ formidable might keeps BTS on top so that even the group’s impact on South Korea’s economy has become significant.

In 2017, the institute said that one in every 13 tourists went to South Korea because of BTS. In June 2019, it reported that revenues from the foreign fans’ BTS destination tour have an estimated economic impact of 4.14 trillion won. According to the institute, BTS’ three-day “Love Yourself, Speak Yourself” concert finale in Seoul last October had 1 trillion won ($860.7 million) worth of direct and indirect economic impact on South Korea.

BTS is an exciting world because Armys never know what the band’s got up its sleeves.

Its new album, “Map of the Soul (MOTS):7,” due for release on Feb. 21, completes the septet’s Jungian-inspired musical narrative. The singles “Shadow” and “Black Swan” are introspective and cutting-edge.

The group also introduced “Connect, BTS” which combines contemporary art and music, as part of its pre-album launch activities.

Incidentally, “MOTS:7” has sold a record 3.42 million stock preorders in its first week of availability, according to a Forbes.com report.

With BTS now commanding the world stage, it will be a sentimental hometown pilgrimage for Armys who have loved the group since day 1 and for those who recently fell into the rabbit hole, as it were, and have no plans of getting out.

You can do this BTS tour of South Korea:

Although Big Hit’s founder, Bang Si Hyuk, is a recognized songwriter and hitmaker, his company, when he started, was nothing compared to the agencies that ruled the K-pop industry.

Big Hit used to rent a floor for its office, and another floor for BTS’ dormitory, where its members shared a single room in this nondescript building in Gangnam. It looked like a deserted property when we visited, except that fans milled about and every inch of the building’s walls, railings and stairs, are covered with Armys’ messages of love and support for BTS and Big Hit.

From its current second address, Big Hit is reportedly moving this year to a bigger and swankier building where the company will occupy several floors to accommodate its growing enterprise.

Less than five minutes away by foot from the old Big Hit building is Yoojung Sikdang, the Bangtan boys’ favorite restaurant when they were trainees. Imagine seven lanky boys, barely out of their teens, walking to the neighborhood restaurant after a long, grueling rehearsal. (These days, BTS could no longer walk the streets without any security or manager in tow.)

Yoojung Sikdang, decorated floor to ceiling with BTS memorabilia, has traditional and affordable Korean fare such as hot pot bibimbap, grilled pork belly and vegetable wrap, and sausage stew. We’re not sure if the nice lady who showed us the boys’ favorites on the menu was the restaurant owner, but nonetheless she has fond memories of Bangtan.

She showed us their favorite table, their seating arrangement marked with stickers. She said they were handsome, polite and kind.

We asked if their long-time, extremely good-looking manager, Sejin, also went there and she laughed, nodding her head. Loved by the boys, Sejin has become a celebrity among Armys.

This is a place for pizza lovers and K-pop fans. Laundry Pizza is a favorite filming location for K-pop groups. The interior is like a laundromat with a row of laundry machine lids on one side of the room. The place, which has a ’70s bistro vibe, was the shooting location for BTS’ “Love Yourself: Her,” a nine-track album which made a historic debut on record charts in South Korea, Japan, the United States and the United Kingdom, and made impressive rankings on record charts across continents.

BTS’ highly successful “Love Yourself: Speak Yourself” concert tour wrapped up at the Jamsil Stadium. My friend Camille and I watched on the second day of the three-day finale. It was my first-ever stadium concert, and while I could barely see the boys on stage, their songs, energy, and the state-of-the-art production gave an unforgettable thrill.

Jamsil’s main stadium was built in 1988 for the Summer Olympics. Since then, several legendary acts like Paul McCartney and Michael Jackson had performed here. But certainly, its most significant artists are its own South Korean trailblazers, like musical genius Seo Taiji, whose Seo Taiji and Boys are credited for laying the foundation of K-pop. The Bangtan boys have their copper handprints mounted along with those of Seo Taiji, on a display board in the stadium grounds.

BTS is among the 17 K-pop groups that have “Gangnamdol” (portmanteau of Gangnam, idol, and doll) bears along the K-Star Road in the upscale neighborhood of Gangnam. Supposedly, a band gets to have a bear on K-Star Road depending on its chart sales and popularity abroad, among other criteria.

BTS’ message of self-love and social awareness was among the reasons they gained fans around the world. In the songs, listeners found meaning and relevance that cut across race, belief, gender identity and age.

But the message is most striking among today’s youth who deal with bullying, violence and mental health issues. BTS has partnered with Unicef for its youth empowerment campaign, and in September 2018, the group became the first Korean band to appear at the United Nations General Assembly, where band leader RM spoke on the group’s behalf.

BTS is among the Lotte Duty Free celebrity endorsers featured in a “star avenue” at the Lotte Department Store’s main branch, near the famous Myeongdong shopping district. The Bangtan boys also have their handprints here. We hope that its interactive video and commercial film will still be at the tunnel for Armys to enjoy this year.

While the boys do have a taste for foreign luxury brands, they unabashedly love their own, wearing local brands and modernized versions of the hanbok. In their reality shows, the boys always crave for Korean food, and they’d have casual musings about home whenever they are overseas.

Branches all over Seoul

BTS created BT21 in 2017 in partnership with Naver’s Line Friends. We went to the different Line Stores in Seoul (.ie., Gangnam, Itaewon, Hongdae, Myeongdong, Insadong, YP Books at Coex) because the BT21 characters and merchandise are unbelievably cute, though pricey.

There are also BT21 cafés in some of the bigger Line stores where fans can hang out. BT21 has 5.1 million followers on Twitter and 2.54 million YouTube subscribers. A YouTube animated episode of Chimmy’s backstory, where he was abandoned as a baby and found a friend in Tata, had Armys in tears just before Christmas.

Armys joke that if BT21 released an album, it just might join BTS on the record charts.

Fans predict that Jin will be Bang PD-nim’s successor at Big Hit because of his business savvy, earning him the moniker “Jin Hit Entertainment”.

Jin and his brother opened Ossu Seiromushi, a Japanese restaurant where Armys can experience the Japanese seiromushi method of steam cooking in bamboo trays. We got a taste of the sweetest vegetables and the most tender meat, and the serving was large enough for four people.

I went there with my friends Kel and Lai a week after the concert, when the other customers in the cozy restaurant were still predominantly Armys .

When you’re at Ossu, make sure to look at the top shelves by the cashier. You’ll see a row of comic book heroes collectibles. Those on display might just be Jin’s.

Aside from being on Seoul’s Michelin Guide, Geumdwaeji (or Golden Pig) Sikdang is also Jimin and Jungkook approved. According to the Michelin Guide, the place serves “fine cuts of YBD pig, a cross breed between Yorkshire, Berkshire and Duroc.”

Jimin and Jungkook would eat on the third floor of the restaurant, where the sunroof has a nice view of the neighborhood. Fans can ask the staff to see the menu signed by the two BTS members.

The Run BTS series is a reality show where the boys face challenges, all while letting their hair down and being their playful 20-something selves. In Run episode 45, BTS tried its hand at being baristas for a day at the &Gather Café.

One of Korea’s top ranked baristas gave the boys a crash course on coffee-making, taught them how to make espresso and latte, and helped them make their signature coffees.

You can try the BTS concoctions here: Rosy Latte by Jin; Creamy Latte by Jimin; Injeolmi Latte by V; Shakerator by RM; Coco-presso by J-Hope; Espresso Berry Latte by Jungkook; and Suga’s Iced Lemony Coke (Café Lemoni in the show).

“I’m Fine” is one of BTS’ songs in its bestselling “Love Yourself: Answer” album. It’s said that the song is a response to one of the band’s earlier hits, the heart-wrenching “Save ME,” which is part of “The Most Beautiful Moment in Life: Young Forever” album, released in 2016.

The café recently opened, and the owner’s favorite member is Jin. While photos of Worldwide Handsome (the nickname funnyman Jin gave himself) dominate the café’s walls, there are also many pictures and memorabilia of the other six members.

Those who come to this bright and cozy café can watch countless BTS videos on a video wall projector or talk endlessly about the Bangtan boys, while having coffee, tea or juice and cakes. It’s definitely a place where Armys can be happy and feel just fine.

Other BTS destinations we’d love to check out soon: