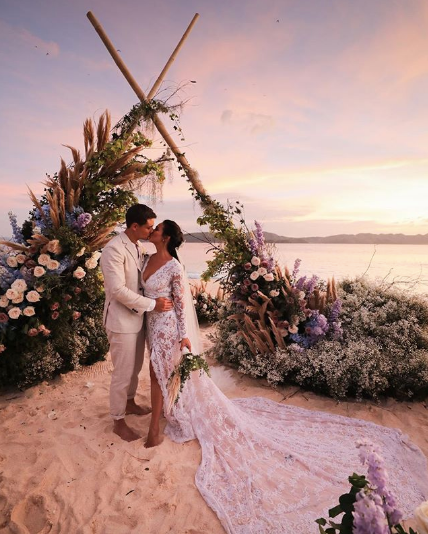 It’s wedding season! As we await the highly-anticipated nuptials of Sarah Geronimo and Matteo Guidicelli and Sarah Lahbati and Richard Gutierrez, let’s take a trip down memory lane and revisit some of our favorite bridal looks from ten local celebrity weddings.

Prior to their Boracay wedding where the bride wore an off-shoulder number by Vania Romoff, Maxene Magalona and musician Rob Mananquil opted for an intimate church wedding on January 8, 2018 with their nearest and dearest. Instead of the traditional gown for their church wedding, Maxene wore a white tea-length dress, while Rob wore a checkered gray suit topped off with a leather jacket.

Anne Curtis and restaurateur Erwan Heussaff tied the knot on November 12, 2017 in a private ceremony in Queenstown, New Zealand. Anne wore a lace ball gown with an exaggerated, cathedral-length train by Monique Lhuillier, while Erwan wore a suit made by his trusted tailor from Paris.

Solenn Heussaff married Nico Bolzico on May 21, 2016 in France. Their wedding was held at the Eglise Notre Dame in Combourg. Solenn wore a wedding dress designed by Israeli designer Lihi Hod.