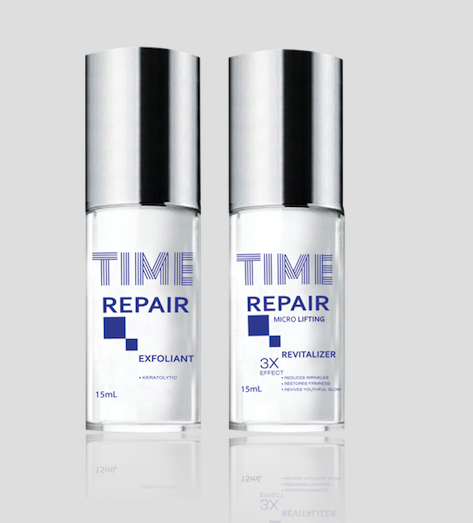 A clinical study conducted by a fellow of the Philippine Dermatological Society (PDS) proved the efficacy of locally produced anti-aging regimen in improving skin moisturization—a key factor in avoiding skin problems and visible aging— by up to 34 percent in just four weeks.

The test conducted by clinical investigator Dr. Nenita Lorenzo-Alberto, MD, FPDS, FPSAAI, also showed that the use of these anti-aging preparation significantly reduced fine lines on the lips, eyes, and forehead, and also resulted in considerable skin smoothening.

The study had 30 respondents, who were instructed to apply Time Repair Exfoliant on their forehead and right half-face and Time Repair Revitalizer upon drying. They used the products two times a day for four weeks.

Aside from proving the efficacy of the products manufactured by BCP Dermatological Corp. in terms of skin moisturization, smoothening and reduction of fine lines, Dr. Alberto also checked for signs of negative reactions such as papules or comedones, erythema or redness, pruritus or itchiness, and stinging sensation or burning.

Dr. Alberto noted in her report that “statistical analysis on the corneometer readings of the treated side showed significant skin moisturization on the first week until the fourth week of usage.  The highest percentage of moisture increase value of 33.9 percent was noted in the fourth week.”

Also, the dermatologist said the highest percentage fine lines reduction values of 69.3 percent and 72.7 percent were observed on the fourth week for the forehead and right treated eye, respectively.

Then, she added, statistical analysis for the visual assessment of the treated side showed significant skin smoothening on the first week, with further improvement until the fourth week.

“Based on this study, it can be concluded that Time Repair Exfoliant and Time Repair Revitalizer showed significant skin moisturization from the first week until the fourth week of product usage, with highest percentage moisture increase of 33.9 percent on the fourth week.

In terms of the change in the number of lines on the lips, significant reduction was noted from the first week up to the fourth week, with highest percentage reduction of 69.3 percent (forehead) and 72.7 percent (eyes-right) noted on the fourth week of product usage.

In terms of skin smoothening, significant improvement was noted in the first week, with further improvement until the fourth week of product usage. There were also no adverse reactions noted for the entire duration of the study.”

Time Repair Exfoliant and Time Repair Revitalizer are available at all DS Diana Stalder by Dermaline branches and at reputable dermatologists’ clinics nationwide.