What does Kobe Bryant mean to you? | Inquirer Lifestyle 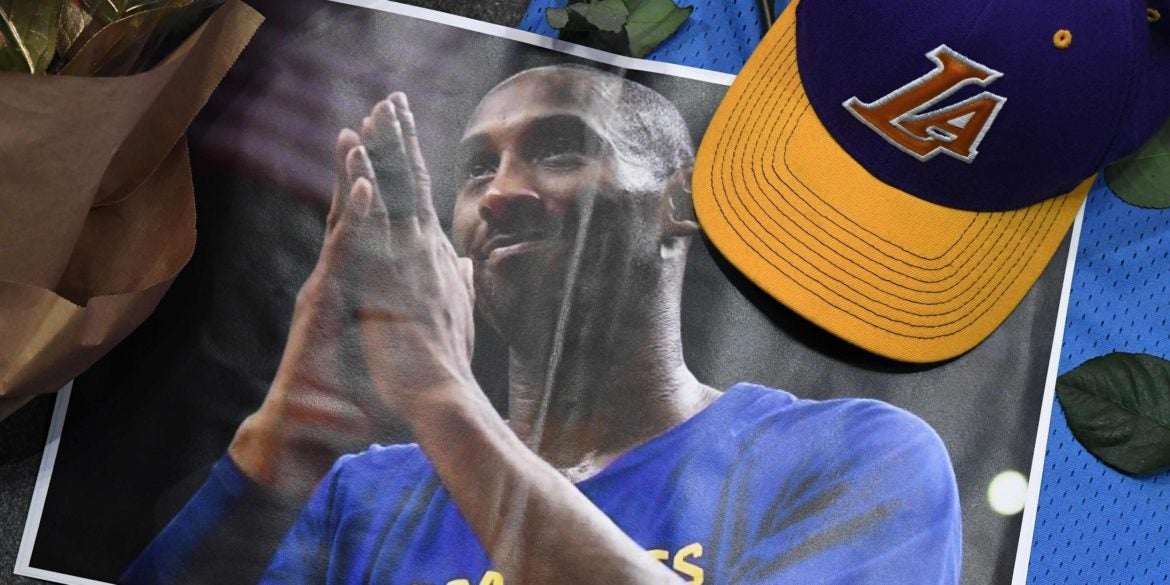 A photo, cap and flowers are placed at a makeshift memorial to NBA legend Kobe Bryant, at Staples Center in Los Angeles, USA. He was killed along with his daughter and seven others in a helicopter crash on Jan. 26. —AFP

What does Kobe Bryant mean to you?

UAAP players past and present talk about the Black Mamba as a hero, an inspiration, a spirit animal and one of the reasons they fell in love with basketball

Nine people lost their lives in the tragic helicopter crash that happened in California earlier this week. Basketball legend Kobe Bryant and his 13-year-old daughter Gianna were among those who died and people all over the world expressed their grief and sadness over the tragic loss.

We asked University Athletic Association of the Philippines (UAAP) players—both current and recent graduates—to pay tribute to the man by explaining what Kobe meant to them. Here’s what they said:

“To me, Kobe is a hero and an icon I looked up to growing up. Ever since I started playing basketball at the age of 8, I witnessed his greatness and how
he inspired everyone to push themselves, be relentless and never give up on their dreams. Kobe has so much impact on the game that I love. I will truly miss him!”—Renzo Subido, University of Santo Tomas Growling Tigers and San Juan Knights

“Kobe Bryant was one of my idols. He was someone I looked forward to meeting; I also hoped to play like him. Too bad he died at such a young age. He will forever be a legend. “And I’m sure his legacy will linger. He will forever be missed. He has always been an inspiration to me. Knowing that
hard work pays off and watching his clips make me want to go harder.”—Maureen Okoli, De La Salle Lady Archers

“Kobe Bryant is one of the NBA players I admire the most. As a basketball player myself, I was inspired by how he played on court and most especially
how he lived his life outside the court. Truly a rare basketball legend that will forever be remembered. RIP, Black Mamba.—L-Jay Gonzales, Far Eastern University (FEU) Tamaraws

“Whenever I think of Kobe Bryant, two words immediately pop into my head—hard work. It’s such a cliché, but Kobe is the pure embodiment of hard
work. He went from being a benchwarmer in his first year in the NBA to being a world-renowned athlete. It’s just what everyone dreams of and hopes
for, that they can sow the seed now and reap the benefits in the future.

“When I was in grade school, I wasn’t exactly the kid who had a God-given talent to stand out and be the best. I had to work on it and gradually improve and the player I would watch and look at was Kobe. I would study how he would move and understand the game. Every time I opted not to hang out with my friends or go to a party, I would always think about how I could reap the benefits in the future. Kobe inspired me to develop the mentality that you should always be the hardest worker in the room and that you should be your biggest critic.”—Dave Ildefonso, NU Bulldogs, Ateneo Blue Eagles

“Kobe Bryant was someone I grew up watching and admiring from afar. He was one of the reasons I developed my love for basketball. I would see
a move he would do on TV and I would go outside right away and try and copy that move in my driveway. Even the first basketball team I played on was the Lakers.

“He was my childhood hero,my inspiration, and my motivation. Kobe has inspired me to do whatever it takes to achieve greatness. Nothing in life ever
comes easy and you really have to be willing to put in the work.

Kobe also left an impact on me to live a life that inspires others to do whatever they want to do. People sometimes just need that extra motivation or that extra push to inspire them to do something great and I will never forget how Kobe did that for me. I will continue to do that for other people, as he did for me. Mamba forever!” —Trina Guytingco, Ateneo Lady Eagles

“Kobe Bryant is an inspiration to me. It was through his mentality that I gained courage, that just like him, I, too, could be fearless. He is my hero. It
was through him that I learned that all the sacrifices I make and all the pain I have to endure, in the end, will all be all worth it. “At the end of the day,
though, I am reminded that he is also just a man. A human being, like us, who dreamed big dreams. He was known for being a fighter and when
he strived for greatness, he achieved greatness.

“For me, that’s Kobe: a man, my hero, my inspiration. I will forever be grateful for him in his role in helping me become the player I am today. There
will never be another Kobe Bryant.”— Matt Nieto, Ateneo Blue Eagles

He’ll do anything to win “Kobe Bryant is a mean-ass competitor. He’ll do anything to win. Big or small things, he’ll do it all for the sake of winning. His
hard work and dedication for the game are surreal. I watched videos of people saying he religiously trains 10 hours a day just to be the best of the best.
I wasn’t his biggest fan growing up, I hated him because he would beat my favorite players… but at the same time it made me realize how great he
was.”—Evan Nelle, San Beda Red Lions, De La Salle University Green Archers

“I’m not an avid fan but he really did inspire me and a lot of basketball players around the world. He had helped people and was willing to help people
until his last breath. It saddens me to know that the legend is gone too soon.”—Clare Castro, FEU Lady Tamaraws, Gilas Women

“I barely knew him when I was a kid, but my friends, coaches, mentors and family especially my brother, Axyl, always talked about his work ethic … By the time I fell in love with basketball, I was also slowly drawn to Kobe. He means everything I know about basketball and it does not stop there.

His philosophy, the Mamba Mentality, has pushed me to reach greater heights even outside the court. This means setting concrete goals and putting
my energy into things that would help me reach them. Not only that, but he also taught me that my goals cannot be attained if I don’t work for them.

Therefore, I did. Every single day. Because that’s what Kobe is about—hard work. “He inspired me to have the desire to improve every day, that’s why I gave every bit of myself in my last year of UAAP season. I did everything to improve my game in order to help my team. I did extra workouts after training and on weekends together with my teammate, Joie. In my last year at the collegiate level, I promised myself to truly embody the Mamba
Mentality just like Kobe. His passion for the game is in-finite that’s why I don’t think I can reach his level despite how much I work. But I could
always try, right? Kobe would want me to keep trying.

“He also constantly inspires me to be competitive, not just with my opponents, but with myself—because my real enemy is me. Kobe showed me the
eagerness to find lessons in every mistake and how I can control the output of my progress.

And for me, I internalized it this way: Once I think that I’m better today, that’s the start of my own downfall. Because while you’re resting or being complacent, your opponents will still be doing work and chances are they’ll surpass you. Do not settle for less, strive for more. Be competitive in your own way.

This is how Kobe became an icon—he refused to lose so he kept grinding.

“Lastly, he inspired me to push myself every time I wanted to give up, especially in basketball.

In times when I didn’t trust in myself with the ball, every time I doubted myself that I couldn’t shoot and perform efficiently on the court, every
time I didn’t believe that I could defend the best players of each team, I thought of Kobe and all those ‘what-ifs’ and fears wash away. I became a fiery competitor who never backed down.

“I thank God for bringing Kobe Bryant into this world because he is certainly a good role model and without him, many kids would have taken a different path. The Mamba Mentality will live on because the next generation will never forget. His legacy will be passed down and Kobe will be
immortalized.

May everyone in the tragic accident rest in peace.”—Alyssa Villamor, Ateneo Lady Eagles

“Kobe Bryant was my role model. He inspired me not just as an athlete but to be a better and kinder person outside basketball.

He taught me that anyone can be the best player if you work hard and be disciplined in every way, like the way you train, sleep and eat. You need
to be serious at practice, be focused during every drill and take your shot like you are in an actual game.

“I watched an interview of basketball player-turnedsports analyst Jay Williams where he talked about wanting to take 400 shots in the gym the night before their game against the Lakers.

When he got there, he saw Kobe already working out and in dead sweat. He worked out for a good hour and a half and when he was done, Kobe
was still working out. Kobe dropped 40 points against the Bulls that time.

“Jay asked Kobe why he was in the gym for so long and he replied, ‘Cause I saw you come in and I wanted you to know that it doesn’t matter
how hard you work, that I’m willing to work harder than you.’ His work ethic, love and passion for basketball are inspiring and extremely impressive. And one thing I like about Kobe is he supports women in sports and encourages her people to support female athletes.”—Monique Del Carmen, NU Lady Bulldogs

“Kobe taught me that if you have a dream, chase it, don’t let anyone tell you that you can’t achieve it. You control your own destiny.

“He inspired me to help others as well, guide them, share what I know with them because at the end of the day, we do what we do because we just
love basketball.” —Mike Nieto, Ateneo Blue Eagles