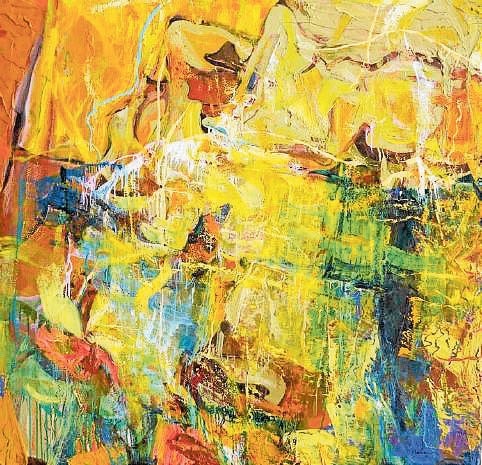 The great modern masters Picasso, Matisse, Renoir and Chagall were devotees of music and used it—as subject, as image—to propel some of their iconic works.

The Russian artist Wassily Kandinsky, pioneer of abstraction, likened his works to visual music. “With few exceptions, Music has been for some centuries the art which has devoted not to the reproduction of natural phenomena, but rather to the expression of the artist’s soul.”

Not surprisingly, returning the compliment in reverse, composers have used great artworks as their source of inspiration. Two well-known works are Debussy’s “La Mer” which was inspired by Hokusai’s “The Great Wave” off Kanagawa, and Igor Stravinsky’s “The Rake’s Progress” after the English artist Hogarth’s work of the same title.

Strangely, on native ground, few Filipino artists, reputedly coming from a musical race, have delved into music as inspiration, although National Artist Hernando Ocampo regarded his abstractions as “visual melodies.” A rare exception, but only indirectly, is Fernando Amorsolo’s “El Ciego,” a blind old man strumming a guitar.

Abstractionist Edwin Wilwayco is the only Filipino artist who has exhaustively used music both as subject and inspiration of his burgeoning body of works. For a great length of time, Wilwayco has specifically focused on works of such composers as Vivaldi, Dvorak, Bach, Schubert, or with musical formats like Scherzo.

Wilwayco’s previous production was triggered by the works of the French composer Eric Satie, in which the artist proved once more his staying power, his artistic stamina, and the magic of music, as Wilwayco unfurled some of his more eloquent works, intermingled with his own signature calligraphic brushstrokes, ever inflected by Abstract Expressionist dynamics.

In “Conversations with Satie,” Wilwayco allowed us to witness the convergence of his musical inspiration with his own visual panache.

Often the supposedly inspiring music may be too overwhelming for an artist’s armory of skills and techniques. As a consequence, it shows an artist coming up short of his ambition and aspiration. Fortunately, Wilwayco—a swashbuckling veteran who refuses to be gobbled up by his musical source – has gained through the years a perspective in the proper use of a stimulus—whether visual or aural. By now he has mastered the run and riff, as it were, of a musically inspired abstraction with the cool assurance of one who has “been there, done that.”

Wilwayco’s latest musical offering, on view at Arte Bettina, ups the ante by mounting a show based solely on one of classical music’s most emotionally overwhelming religious music, outside of the “Requiem.” The work at hand is Johannes Sebastian Bach’s “Magnificat.” The orchestration is for two flutes, two oboes, two oboes d’amore, three trumpets, timpani, strings and continuo. It is based on the Gospel of Luke—“My soul doth magnify the Lord/ And my spirit rejoices in God my Savior”—which was Mary’s response to her cousin Elizabeth, who had greeted her as the Mother of God.

How then does a viewer characterize Wilwayco’s response to the Magnificat? And if the music had exerted such a pull on the artist, what was the compelling urge, the driving force, that enables him to freely luxuriate in the music? Like an amniotic fluid within the womb of Wilwayco’s studio, within which the artist’s spirit swims and swoons, the music of the Magnificat—from its uplifting opening (“Magnificat Anima Mea” through the intervening arias (“Et Exultavit . . . Quia Respexit”. . . ) and on to the resounding ending (“Glora Patri…Sicut erat in principio”) —fills the air, the studio space itself seeming to contract and expand, the current of melodies transforming, in the hands of Wilwayco, into activations of rich, lavish pigments. Immersed in the music, the artist generates his own pictorial life.

Indeed, the metaphor of conception and fruition will not be far-fetched. A painting being conceived in the womb of Wilwayco’s imagination comes into fruition through relentless discovery and disruption of form, where each consequence then becomes a point of departure, whence Wilwayco will once again be transported into another rapturous and resonant expedition into undiscovered form. And because the artist works on the principle of layering—previous layers being buried underneath—the paintings are enriched by pentimento—the Italian word for repentance, because the artist has changed his mind.

In “Magnificat,” Wilwayco, as is his wont, works in series: sustained, kept going, until he finds himself in a state of exaltation. How indeed does an artist know when a painting is finished? To this curious question, artists have proffered various replies: “When I have exhausted myself”. . . “When I have nothing more to add or to subtract”. . . ” When it has taken a life of its own”. . . or just simply: “Instinct.” On the contrary, Willem de Kooning, undoubtedly the acknowledged major influence of Wilwayco, states that “A painting is never finished. . . merely given up.”

The critic who championed De Kooning, Harold Rosenberg—the man himself who coined the phrase “action painting”—reinforces De Kooning’s position: “Each stroke had to be a decision, and was answered by a new question. By its very nature, action painting is painting in the medium of difficulties.”

Looking at the Magnificat paintings, one sees ample evidence that Edwin Wilwayco has encountered and surmounted the difficulties laid before him: There is less constriction of form, intentionally less fulsome, less dense, less turbulent, with more slippages of various passages turning lyrical, loosened by drizzles of dripping paint—thus magnifying his own art, his spirit ever rejoicing in the inexhaustible power of abstraction.—CONTRIBUTED INQ