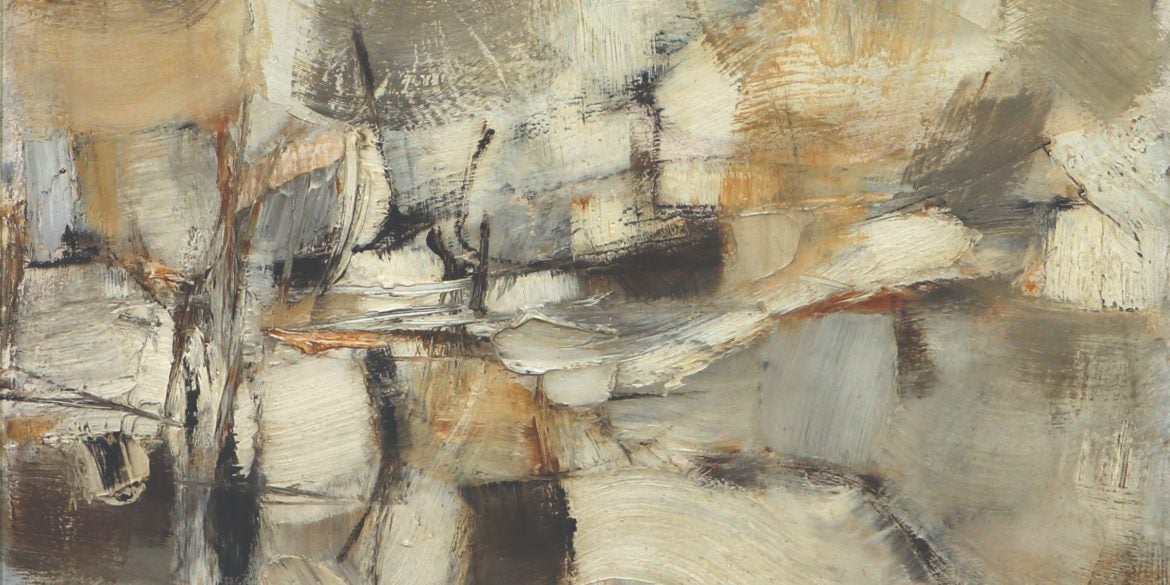 The auction would be most auspicious especially for the late National Artist José Joya, said León Gallery director Jaime Ponce de León. “Not only was he the ACC’s first grantee back when it was still known as the Rockefeller Foundation, but it was in the ACC auction when he struck auction gold with the coveted ‘Space Transfiguration’ becoming the Philippines’ most expensive painting.”

Two striking examples of Joya’s genius are to be found in the Feb. 22 auction: a boldly colored work “Prelude to Violence” and a more serene panorama in greige, romantically named “Suspero del Mar (Whisper of the Sea”.) Joya’s career was dotted with all sorts of firsts, including being the country’s first representative to the Venice Biennale, alongside Napoleon Abueva.

A very rare Luz, simply titled “RYU,” recalls the majesty of his iconic work at the Cultural Center of the Philippines, noted Ponce de León.

National Artist Ang Kiukok’s powerfully aghast “Seated Figure” is all about shock and awe, a perfect piece for these changing times.

Although ACC auctions feature mostly the works of modern masters, they stand side by side with the old masters.

“This auction is particularly well-rounded, “ said Ponce de León. “There are masterpieces from the 19th century with Felix Resurreccion Hidalgo and Fabian de la Rosa, an extremely large (Romulo) Olazo and a ravishing Betsy Westendorp, and a full house of 10 Fernando Amorsolos, not to mention an exciting number of contemporary artists—and an amazing representation of the best in Filipino fine furniture, ivory and silver, as certain well-known collectors are beginning the process of de-accession.”

Augusto M.R. Gonzalez, expert on antiques and social histories (and a collector in his own right himself), said “Indeed, there are numerous pieces that will make Manila’s cognoscenti froth at the mouth with acquisitiveness.”

What he terms is “an unsurpassed selection of highly important and magnificent Filipino antiques” is led by “an exceedingly rare 1600s refectory table—in the rare dinemenyo style—fashioned from golden narra wood. It was originally found in an Augustinian church in Eastern Pampanga (first built with stone in 1641) and is now in an important private collection, acquired by the distinguished collector in 1984 from an old Pampanga family who had owned it since the 1863 earthquake.”

This very table was used to furnish the bedroom of the visiting Russian Grand Duke Alexei Alexandrovich, uncle to the Tsar, commented Gonzalez.

Ponce de León noted that this piece was selected by no less than the late Martin Imperial Tinio, Jr to represent the glories of Filipino artistry in the landmark bible “Asian Furniture.”

Also expected to interest antique collectors and auction denizens, said Gonzalez, is a splendid 1850s sola pieza (one–piece) dining table of molave and tindalo hardwoods with an ornate base of stylized feathers and flowers from Bohol island. This is from the private collection of the esteemed antiques doyenne Ma Cristina Ongpin–Roxas.”

Riveting as well, according to Gonzalez, are “an 1890s tall aparador in golden narra wood from the Ah Tay workshop originally owned by Don Telesforo Chuidian y Chuaquico, the richest Chinese-Filipino during the 1896 Revolution who also financed its currency along with Don Mariano Limjap y Barrera.”

Worthy of attention is “an early 1900s aparador in kamagong wood originally owned by the reformist Dr. Maximo Viola, an artist who liked to design his own exquisite furniture.” The affluent hacendero Viola was a good friend of Dr. José Rizal and it was him who lent the latter funds to publish his 1887 novel “Noli Me Tangere,” said Gonzalez.

A pair of solid silver candle holders from the 1800s is particularly elegant. “These accoutrements usually came in sets of six and were used to flank the crucifix at the altar during holy masses (Pre-Vatican II),” said Gonzalez. “The candle holders were decorated in the ysot manner in which a sharp instrument called a “tiburin” was driven into the silver sheet quickly and repeatedly with a deft silversmith’s hand. The process was very difficult because a single mistake necessitated the repetition of the entire process. In fact, a mistake simply was not acceptable. The “ysot” process of silver decoration is the oldest of silver embellishment techniques in the Philippine islands. These ecclesiastical items are great rarities because silver is prone to being melted down during difficult and troubled times. The survival of antique Filipino ecclesiastical silver pieces is worthy of recognition and celebration”, emphasizes Gonzalez.

There are also elegant ivory pieces, including a beautiful late 18th century/late 1700s carved head of the Spaniard Santo Domingo de Guzman (Saint Dominic Guzman), founder of the Order of Preachers, better known as the Dominicans. The status is from an important private collection.