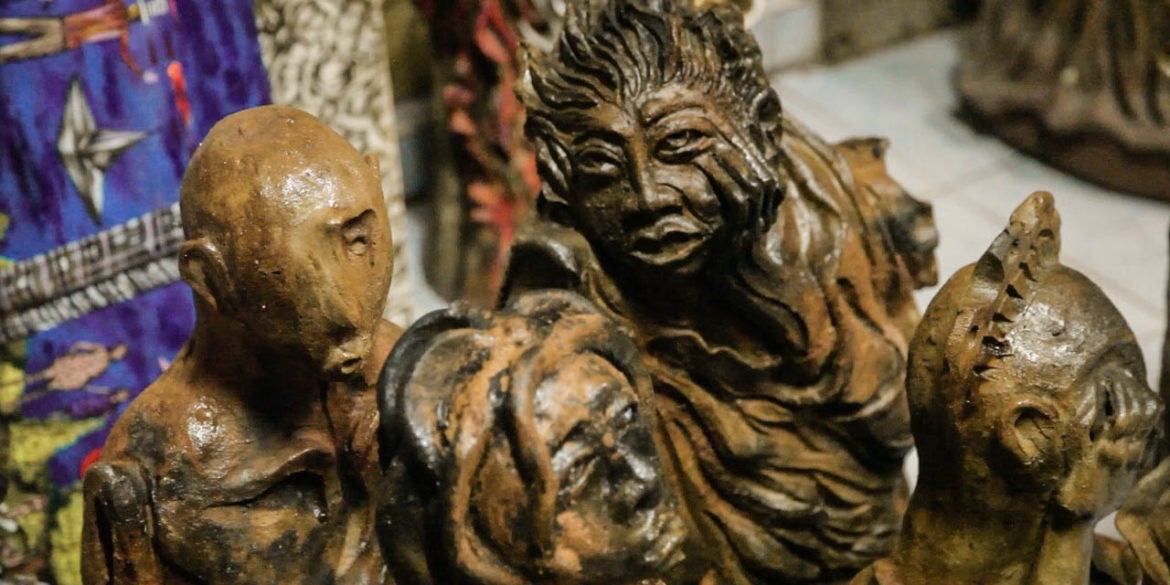 Recycling, reusing, repurposing, upcycling—whatever the current environmental buzzwords are, two Bacolod locals seem to be doing them as they elevate their work to fine art.

Geraldo and Argel, both virtually self-taught, are two of the 60-odd visual artists from the Philippines and abroad who will be featured at the 8th Art Fair Philippines on Feb. 21-23 at The Link car park in Makati City.

Geraldo, who learned his skills to shape and mold from Bacolod’s potters, will be exhibiting sculpted figures using soil from anthills or termite mounds, known to Filipinos as punso. Despite the superstition attached to these hills, particularly that they are homes to nuno or elementals that can cause harm to people who offend them, Geraldo has boldly made them his primary medium.

But the sculptor, who draws inspiration from his surroundings and the people around him, says he is not completely unmindful of traditional beliefs. In the past, when he had to dig up the mounds himself, he would ask permission from their “residents” before making the first strike.

Now, he thinks using the punso, if indeed it is inhabited, is upscaling for its “residents” as they will be moving to better, more comfortable, possibly even luxurious, places. As for the termites or ants that live in those hills, Geraldo says they are not being left homeless as they can easily and quickly rebuild those mounds and restore them to their former glory.

Although he was won awards for his work, the artist says, “I don’t really believe that being a good artist is about being popular. A good artist is somebody who does good and can face God, when the time comes, proudly.” The sculptor believes in balance, putting negative and positive elements in his work in equal measure

He also believes one reaps what one sows. “Good karma begets good karma,” he says.

Argel, who has shown his work in several cities abroad, finds his materials and inspirations from sweeping his yard every day. “The broom is my brush, and the earth is my canvas,” he says of his daily routine.

His home is a virtual gallery of his installation works—used toothbrushes as mobiles, an old shoe as a flowerpot, framed disposable lighters. He creates and he adapts. When he had to remove a part of his house for a road widening project, he expanded sideways, incorporating a large tree in the yard in the expansion.

Argel spent several years as a “resident artist” in Boracay, creating things from accessories to visual artworks. He says he used his formal schooling to find out where his real interests lay, but began to take interest in found, discarded things at sites where his family, who was in the construction business, had building projects.He has a laid-back style as an artist, holding on to a found “gem” and letting an idea percolate, sometimes for years, before creating his unique, innovative works. “Everything is a work in progress until it is bought,” he says of the things on display at his home. “Sometimes the materials stay unused for years.”

He does not sell to just anybody unless he is certain the person truly sees the art in what he/she is buying. Argel also refuses to pander to the commercial and popular. “I will not adapt my art to make my work popular,” he declares.

While other artists may start with an idea then look for the right medium, Argel says he thinks of shapes until he sees the whole.

Both Geraldo and Perry are hoping that their works will reach a younger audience for art and inspire a new generation of artists.

Aside from showcasing the works of the Bacolod artists, the 2020 Art Fair will feature drawings by the late Onib Olmedo from his family’s collection.

Also exhibiting their works are Salvador Joel Alonday, Jaime De Guzman, Jellyfish Kisses, Gene Paul Martin and Neil Pasilan. The works of Carlo Villafuerte, the 2020 recipient of the Karen H. Montinola Selection, a private grant created in homage to the art patron, will also be on display.

ArtFairPH/Projects is presented by the Bank of the Philippine Islands.

Art Fair Philippines is working with New York-based curator and art historian Carina Evangelista in presenting the works of Sol Lewitt, an iconic American artist known for his contributions to Conceptual Art and Minimalism.

This year, Art Fair Philippines is introducing ArtFairPH/Open Studios that will present a series of workshops and demonstrations by respected practitioners in arts and culture.

Another new feature is the ArtFairPH/Film section, a celebration of the last 100 years of Philippine cinema and the possibilities for the next hundred. A selection of the best feature-length and short films, narrative and experimental, documentary and animation, will be screened.

A special cultural exchange project with the Embassy of Italy in Manila, highlighted by the participation of Galleria Tiziana Di Caro, a contemporary art gallery from Naples, Italy, will be showcased.

The 10 Days of Art initiative is a series of events around the Makati Central Business District with participation by galleries, museums, bars, restaurants and retail establishments. —CONTRIBUTED INQ

Fair tickets may be purchased in advance at www.artfairphilippines.com. Tickets will also be available at the reception area of Art Fair Philippines Feb. 21-23. Visit www.10daysofart.com.