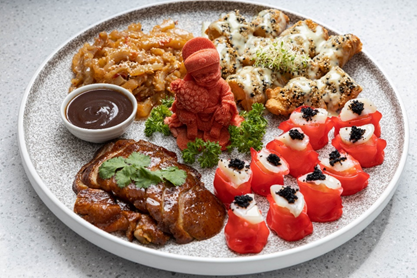 The decision to open a Chinese restaurant at Seda Vertis North was a carefully considered move. Although there were already several Chinese eateries in the area, few were equipped to cater to bigger groups in a hotel setting.

Last October, Seda opened Pin Wei (Cantonese for “good taste”) with a chef who brings with him a wealth of experience.

Veteran chef Hann Furn Chen started cooking at a young age at his father’s Chinese restaurant in Malaysia. He honed his talents with stints in Singapore, Dubai and Indonesia, but Chinese food aficionados might remember seeing him at Mandarin Oriental Manila where he was a chef at Tin Hau.

Last month, the restaurant held its grand opening that started with the deafening crash of cymbals and a spirited lion and dragon dance. In attendance was Quezon City Mayor Joy Belmonte and several officials from Seda.

Pin Wei is the first Chinese restaurant in the popular local hotel chain with branches in Makati, Cebu, Davao, Iloilo, Bacolod, Cagayan de Oro, Sta. Rosa in Laguna, and El Nido in Palawan. Its main food outlet found in all its hotels is Misto which offers buffet breakfast and all-day dining.

After only a few months, Pin Wei has gained a following for its business lunch with a choice of dim sum or noodles, and two mains like spareribs with black beans and homemade spinach tofu with minced pork.

Its Sunday buffet (P1,088 net per person), popular with families, consists of dim sum and appetizers, noodles, beef, pork and seafood, and a lineup of desserts.

One item the chef is particularly proud of is Braised Fish and Mushrooms Soup, Auntie Song style.

According to Chinese lore, the Auntie Song mentioned owned a humble restaurant which gained fame when the emperor who was just passing by tasted her soup. The emperor went on to extol the virtues of the soup made from fish, chicken, beef and pork bones simmered for four hours.

Chen is also eager to introduce his Braised Eight Treasure Fish Maw and Seafood Soup, and Top Shell with Vegetables in Oyster Sauce in the restaurant’s set menus.

The restaurant has a range of fine teas guests can enjoy with their meals. Pin Wei’s house tea is Tie Guan Yin Oolong tea with a flowery fragrance and natural sweetness. Others worth a try are Green Tea in the Long Jing, the Bi Luo Chun varieties, and a white tea named Spring Silver Needle made from buds and immature tea leaves.