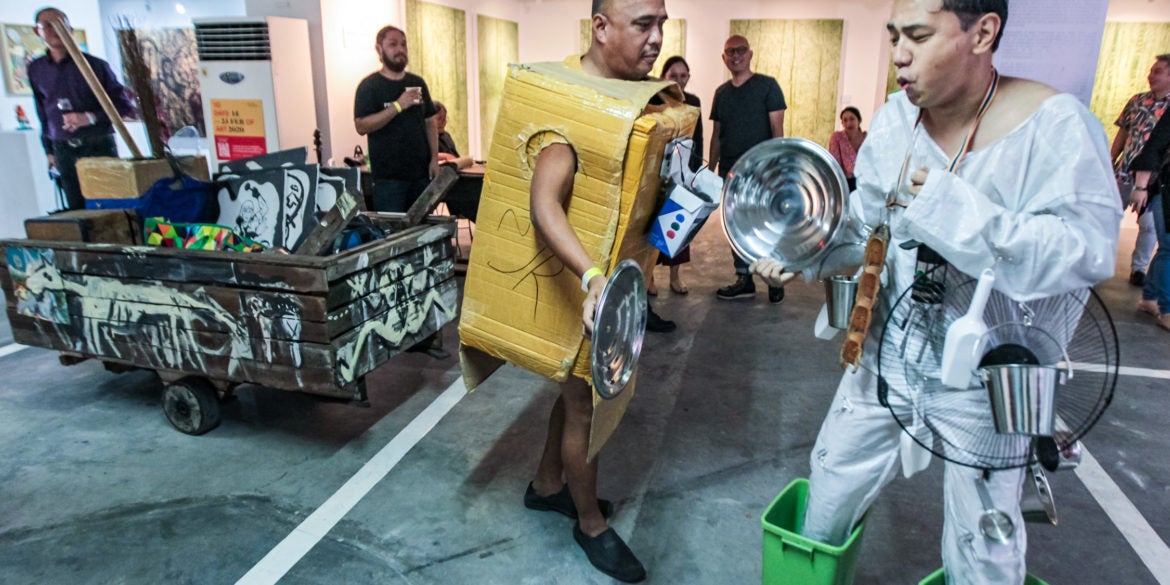 What you shouldn’t miss at Art Fair Philippines 2020

Despite some significant defections, the event has actually grown—2020 has the most diverse participation yet

It’s the end of February and once again, tout le monde is making its way to The Link car park in Makati for Art Fair Philippines.

Now on its eighth year, the art fair has continued to evolve: from being the premier event for buying and selling contemporary Filipino art which was its initial purpose, into being a sociocultural phenomenon.

It has become an annual gathering of the tribe: artists and art aficionados, culture nerds and fashionistas, the moneyed elite and the bohemian fringe, the beautiful and the damned all come to look at art and perhaps buy, but also to mingle, schmooze, network, hook up, see and be seen, and generate content for their social media.

Of course, the business aspect remains a major draw. Manila is now on the international contemporary art radar: Asian and increasingly European galleries routinely make the annual pilgrimage to Art Fair Philippines to sell art and update themselves on up-and-coming Filipino artists.

Participation is de rigueur for local galleries, and despite some significant defections by 10 established galleries, the event has actually grown: there are 61 participating galleries this year, nearly a third of which are foreign.

But many visitors come simply to experience art, and perhaps educate themselves on its finer points. “Food for the soul,” as one visitor put it.

There’s simply too much on display in four floors of The Link, plus the roof deck, to fully take in in just three days; some picking and choosing is inevitable. There are few highlights that should not be missed, however.

“In previous years [the special projects] all had separate boxes,” says Crisologo.

“This time I really wanted every artist to be affected by or involved with the [other artists]. When you’re looking at one guy, you can see the other guys around you, so there’s always like a conversation. They’re not isolated. It becomes a bit of a journey: what you see is influenced by what you saw before, and what you can see in your peripheral [vision]. I wanted that experience.”

The works themselves are already strong to begin with, but Crisologo’s approach, which includes special directional lighting, serves to amplify their impact, making for a truly immersive visual experience.

“I just wanted people to have fun,” he says. “It’s really a fun place. It looks like a Jetsons skatepark!”

Artists from outside Manila have always had a presence in the fair, but 2020 has the most diverse participation yet, with artists and art collectives from Cebu, Palawan, Negros representing the art scenes in their cities.

“Maybe the notion of finding new, fresh, creative eyes is something we can offer,” says printmaker Angela Silva, who is showing her cyanotypes alongside works by other woman artists from Negros in Charlie Co’s Orange Project gallery.

“Maybe in Manila, all the same galleries have to feature the same artists. Maybe they do similar work—very Western-based, inspired by the market, the commercial scene, international trends. But if you’re looking for substance, for new creative inspiration, where is it coming from? You would have to travel more outside Manila. Negros, Cebu, Palawan—they’re all happening.”

The art fair’s Photography section has gone from strength to strength, but this year has some particularly stellar work by Wawi Navarroza, Emmanuel Tolentino Santos, Kawayan de Guia and Sonny Yabao, to mention just a few.

Pushing the envelope are the Art Fair PH/Incubators—spaces given to new and emerging art collectives to do with as they see fit. Fresh and free-wheeling works by art/n23, Giatay, Limbo, Load na Dito, Project 20 Gallery and Signum provide a nice counterpoint to the more formal work presented in the more traditional gallery setting.

Even before reaching the halfway mark, most visitors start to experience visual overload and need to take a pause, or perhaps have coffee, to reboot their brains. Ambient music on the seventh floor, with some of the more tranquil works such as Erwin Leaño’s “Silent Forest” greenscapes in the Pinto Gallery booth, create a “chillout zone” that is, frankly, necessary.