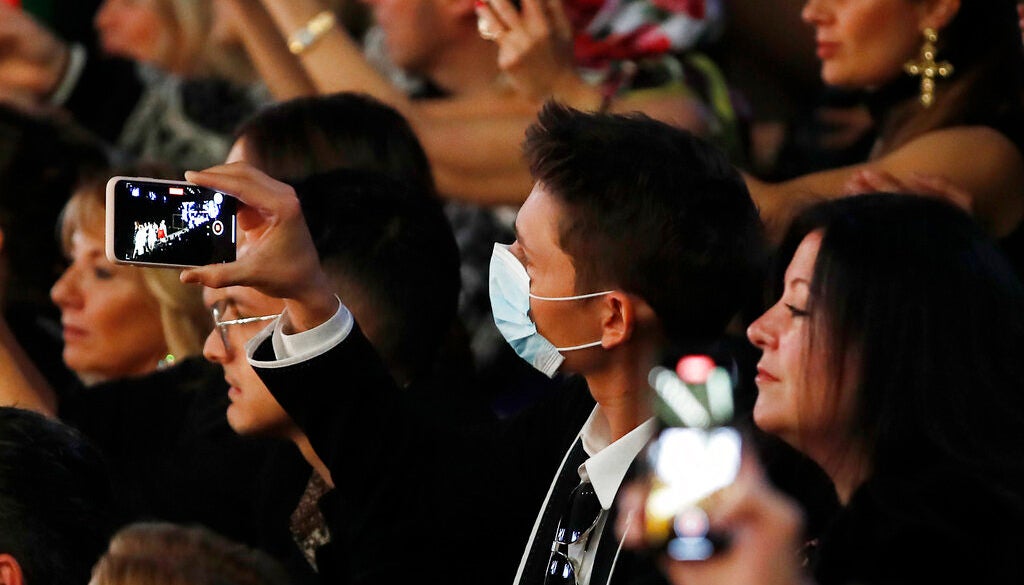 A man wearing a sanitary mask takes photos during the Dolce & Gabbana women's Fall Winter 2020-21 show, in Milan, Italy, Sunday, Feb. 23, 2020. After Giorgio Armani's last-minute decision to show his latest collection in an empty theater due to concerns about the new virus, the rest of Milan's runway shows scheduled for Sunday are to go ahead as planned, fashion officials confirmed. (AP Photo/Antonio Calanni)

Armani fashion show staged behind closed doors due to virus

MILAN — In a last-minute change, Giorgio Armani is holding his Milan Fashion Week runway show behind closed doors on Sunday due to concerns raised by the coronavirus, and instead stream the event from inside the empty showroom.

The fashion house said in a statement early Sunday that ’’the decision was taken to safeguard the well-being of all his invited guests by not having them attend crowded spaces.

A dozen towns in northern Italy have gone on effective lockdown after the deaths of two people infected with the new virus that is spreading from China. Milan is the capital of Italy’s Lombardy region, which reported 54 confirmed cases.

Milan’s mayor on Saturday shuttered public offices. But runway shows continued apace for their fourth day, with most of the fashion crowd taking an analytical attitude to the rapidly spiking infections.

“For the moment the situation is under control,” said the president of the Italian National Fashion Chamber, Carlo Capasa. He added that it was up to government officials or fashion houses themselves to decide if additional measures were needed.

Sunday is the fifth day of women’s wear previews for next fall and winter, with eight other shows scheduled, including Dolce&Gabbana.

It was not clear if the other shows would go on as scheduled. Several shows were also scheduled Monday morning, before the fashion world moves on to Paris, where shows start Monday afternoon.

Armani was forced to show behind closed doors one other time, in Paris in 1998, when officials said there were insufficient safety exits inside a huge tent being used as the venue to allow the public to attend. Only his team and one video camera was present, and a video of the show was later distributed to fashion editors.