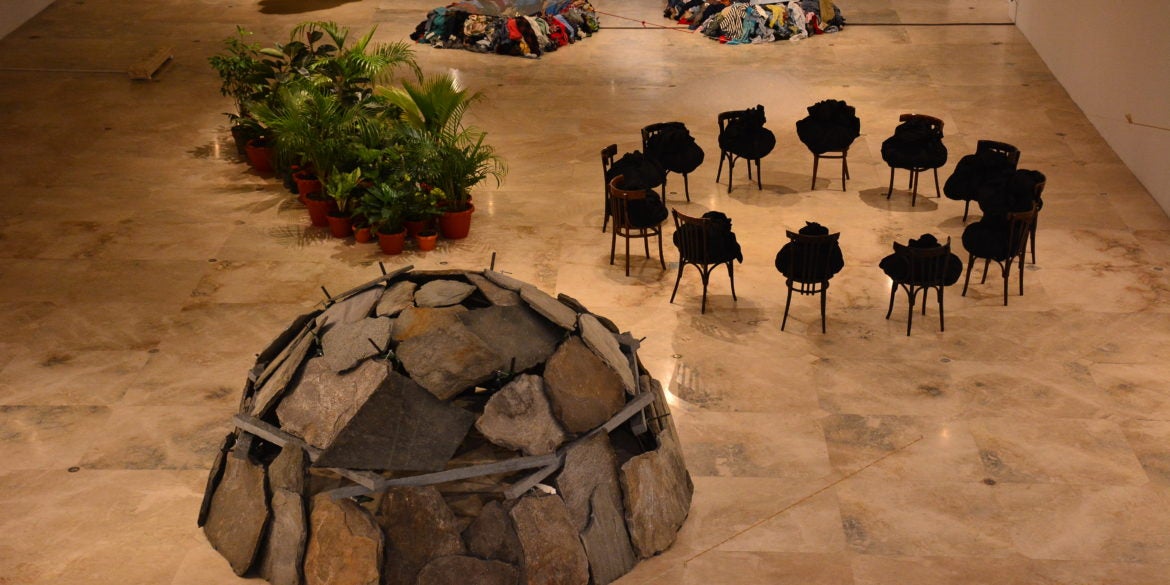 Top view of some artworks in the Tall Gallery of Metropolitan Museumof Manila: Landscape not defined by scenery or space alone

Turin in Italy was birthplace and home to the most significant and influential avant-garde art movement to emerge from southern Europe in the late ’60s. It was called Arte Povera, and its proponents did sculptural work rather than painting, using cheap common-place materials, found objects and anything they encountered in their daily lives.

Central to their philosophy was the idea of art as an experience that would break down the established separation between art and life.

Povera literally means “poor,” and the movement came to be named so because of its distinct use of ordinary materials not associated with the existing values of the art gallery system at that time.

“Arte Povera: Italian Landscape,” at the Metropolitan Museum of Manila, is not your usual show of landscapes. Works on exhibit do not show the hilltop towns in Tuscany dotted with 13th-century villas; they’re not about the hills of Rome, the Alps in the north, nor the breathtaking Amalfi Coast.

Rather, these are “new” landscapes by artists who reacted against modernist abstract painting that dominated European art in the ’50s. Here is a different landscape, one that is not defined by scenery and space alone.

Arte Povera contrasted new with the old to mark the passage of time. By combining ordinary materials from nature and daily life, the artists made provocative, sometimes humorous, works that required interaction between viewer and work. They were not two-dimension works on a wall that you passively stared at in a gallery.

Instead, ordinary things such as soil, rocks, pots, pans, rags or plants were combined with artificial materials and byproducts of technology, to produce installations, sculptures and assemblages that explored the relations between art and life.

They were open-ended works that needed to be activated by participation, works that gave the most ordinary materials new dimensions and new functions.

“Arte Povera: Italian Landcsape” is the first exhibit in Manila featuring works by founding members of the art movement.

“It presents a unique landscape through which to immerse oneself and experience the approach that marked an important page in the history of art,” said Italian art critic and exhibit curator Danilo Eccher. “However, this is not an art historical commemoration or decadent nostalgia but rather a new articulation of an artistic adventure through unexpected narratives told through installations and a new aesthetic grammar.”

Works on exhibit have been loaned from the artists and their estates and faithfully reassembled in the MET Museum. Two younger artists join the Arte Povera pioneers, most of whom are in their 70s and 80s, or deceased.

A few of the works on exhibit were assembled with local materials such as Luciano Fabro’s “Tubo da mettere tra i fiori” (Tube Placed Among Flowers). This work is a different class of sculpture, far away from classical statuary and based on the polarities between natural and artificial, said Eccher. Art is the ability to modify nature resulting in new juxtapositions like this piece.

Seminal works by the movement’s masters that have been exhibited in major art capitals of the world are part of the important landscape exhibit. Aside from Fabro, they are Giovanni Anselmo, Alighiero Boetti, Pier Paolo Calzolari, Jannis Kounellis, Marisa Merz, Mario Merz, Giuseppe Penone, Michelangelo Pistolleto and Gilberto Zorio.

Anselmo’s “Mentre la tierra si orienta” is a conceptual piece depicting the energy of the earth’s rotation and gravity through a magnetic compass randomly placed in a pile of soil.

Francesco Arena from the second generation of Arte Povera is represented by the installation “Europa 11 November 2015.” The date is when a 2-km-long barbed wire fence was put up dividing Croatia and Slovenia after the breakup of Yugoslavia.

His work summarizes a piece of news suspended between history and tragedy through a giant spool with string, rope and knots collected from various sources. Parts of the fabricated thread of fiber and string are strung about in the gallery and installed at eye level so it breaks one’s line of sight, effectively creating a symbolic demarcation.

Another second-generation artist is Gianni Caravaggio, whose sculptural installation of clouds and horizon challenges the imagination with the simplest of objects, engaging the contemplating viewer in the creative act.

Into the 21st century

Arte Povera has survived the 21st century because it wasn’t just an avant-garde movement but something complete in itself, argued Eccher. “It awakens in all of us a sense of connection with the world and everyday things. Its profile is seen in conceptual art, land art, installation, Postminimalism and today’s forms of artistic interventions. It has become a living tradition belonging to a global network of artistic practices.”

“In the age of globalization when everyone can have access to millions of images from a computer or a smartphone, it is even more important to be able to see works of art in the flesh,” he said.

“The power that works of art produce—especially in the case of works from the Arte Povera movement—cannot be transmitted from a screen. This is why I decided to make this huge effort to bring here some of the masterpieces of contemporary Italian art.

“Filipino artists as well as the public will not remain cold in front of the Mario Merz igloo or the theatrical installation of chairs and coal by Jannis Kounellis. It is an homage to Italian art but also an homage to the Philippines that it was chosen as host for the most ambitious exhibition of Italian contemporary art ever in Asia.” —CONTRIBUTED INQ “Arte Povera: Italian Landscape” is presented by the Embassy of Italy in Manila with the support of Security Bank Corp. and MET Museum of Manila Foundation. It is on view until April 30.