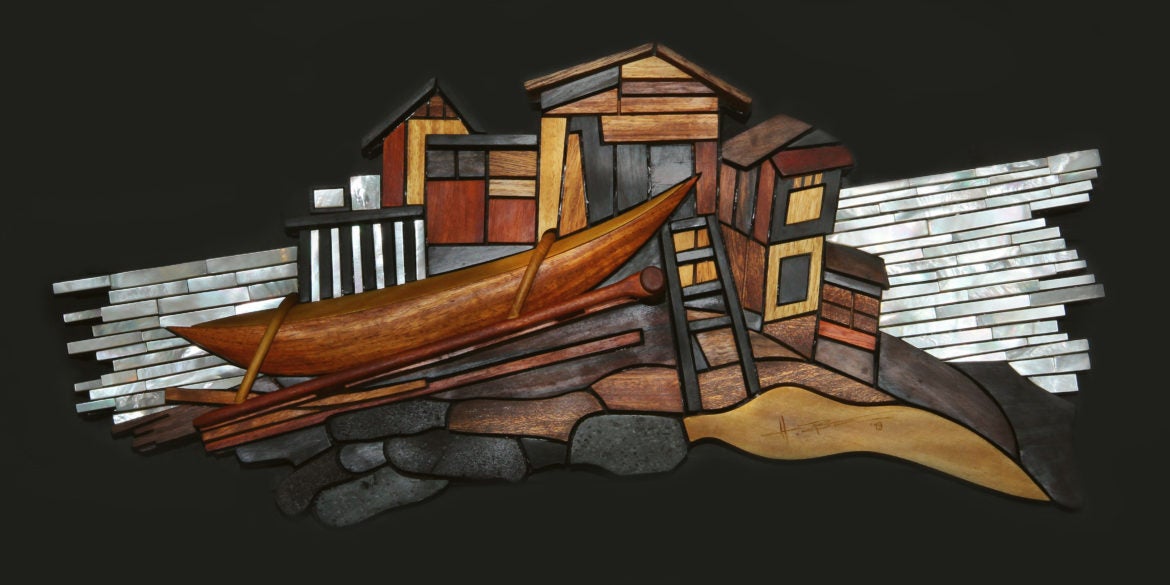 A montage of hardwoods—narra, kamagong, yakal, molave and oakwood—are rendered in geometric planes, organic forms and rigid lines. Their rough surfaces play against the smoothness of mother-of-pearl and blacklip. Bits of imitation lapis lazuli set off the earthy tones and add pops of color.

The title of the wall sculpture is “Victory,” the favorite piece of the maker, Hans Brumann.

“Everything is in proportion. There is dynamic movement brought about by the contrasting shades, the different elements and the gemstone. If one element is missing, it would not look finished,” he says. Known for his exquisite fine jewelry, Brumann explains that real stones are too fragile to be included in the woodwork.

At 78, the Swiss-born artist remains prolific. Aside from running his namesake business, Hans Brumann Inc., he holds an annual exhibit of jewelry and wall sculpture. On March 5, he will once again present a new collection of wall montages at Makati Shangri-La. For the first time, it will be titled in Pilipino, “Anyo at Talinhaga (Form and Metaphor).”

Brumann’s longtime graphic designer and friend, Ige Ramos, coined the title to show the artist’s deep connection with the Philippines.

In 1968, the Swiss-born Brumann came here to work as designer for La Estrella del Norte. In the early ’70s, he became vice president of production for Ding Velayo Export Inc. Yearning to own a business, he became a Filipino citizen in 1978 and set up his shop in Makati.

The collection also presents Filipino themes that have been familiar to Brumann’s collectors and admirers—Badjao huts, the shanty, the banca and the fishnet. “Window” is an abstraction of the capiz windows in ancestral homes, but rendered in a grid of mother-of-pearl.

Yet, Brumann also pushes the envelope with new subjects. “Black Forest” presents the rhythmic pattern of triangles of kamagong (Philippine mahogany) against the ridges of mother-of-pearl.

“Eagle’s Nest” looks like random patterns of chopsticks. On closer look, however, the sequences of the hardwood are deliberate. Mother-of-pearl is used as highlight.

Circles of polished agate from Germany, framed by curvy strips of kamagong, on a backdrop of mother-of-pearl also function as a lighting fixture in “Agatha’s Lair.”

Brumann favors hardwood for its density and mother-of-pearl for its iridescence. He says they represent the harmony of the earth and sky.

His works highlight not only luxurious materials but also Filipino workmanship. His pieces are done with purpose and at a slow production pace. His process goes against the tech-driven movement that demands instant results and immediate gratification.

“He wants to tap a market that will make time to appreciate the details of his work,” says Ramos.

The collection took two years to make. They were produced by three craftsmen in San Nicolas 3, Cavite. Brumann insisted on using only one artisan per piece to ensure even quality of the finishing. It took the craftsmen an average of three months to manually cut and glue the fine pieces hence, the six-figure price. “Victory,” the most expensive, took six months to create a complex jigsaw puzzle.

Brumann ventured into sculpture more than 20 years ago to satisfy the creative urge to try a new medium. His cook, Mercedes Gabon, recommended her husband, Tony, a carpenter who had worked in the Middle East. Brumann and Tony produced a series of wall-mounted crucifixes, made from mosaics of mother-of-pearl. Eventually, the kamagong and mother-of-pearl became Brumann’s signature.

Meanwhile, Mercedes, introduced her son Angelino, who had natural artistic talent. He started learning jewelry-making in the atelier. Brumann saw his potential and got him a scholarship in goldsmithing in Switzerland through the Swiss Embassy’s exchange program.

Sadly, Tony died in an accident. To continue the sculptures, Angelino gathered his artisan relatives in Cavite.

“You can see from the workmanship that a goldsmith was on top this. It’s like making a piece of jewelry but on a larger scale,” says Brumann. He cites the precise way the wood, mother-of-pearl and imitation gemstones are measured to follow the designs.

Next year, Brumann is looking forward to raising the bar. “I plan to make free-standing sculptures,” he says. —CONTRIBTUED INQ