SoKor and NoKor in CLOY fashion: Which do you prefer? | Inquirer Lifestyle ❮ ❯ 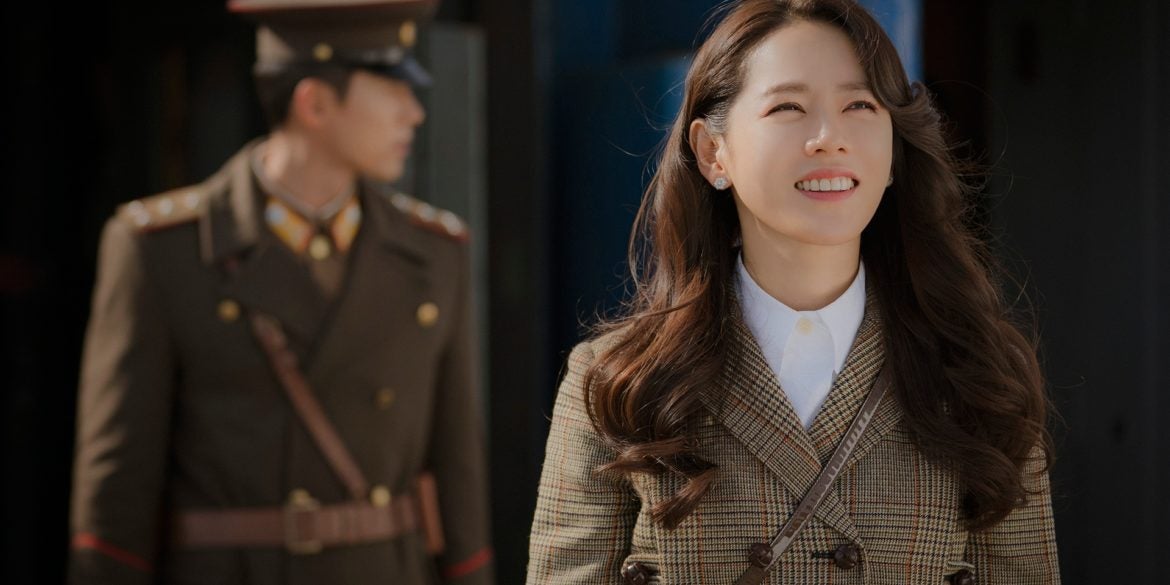 Se-ri’s Pyongyang makeover includes getting a hairstyle called Goodbye Style (but the mannish coat is by Miu Miu).

Talk about sepanx (separation anxiety). People still can’t get over “Crash Landing on You (CLOY),” the hit K-drama about a South Korean heiress (Yoon Se-ri, played by Son Ye-jin) who ends up in North Korea after a paragliding accident and meets army officer Ri Jeong Hyeok (played by Hyun Bin).

It’s gotten praise not just because of the kilig factor and the great chemistry among the actors (including Captain Ri’s goofy and loyal soldiers), but also for its nuanced portrayal of life in North Korea, thanks to Kwak Moon-wan, a defector who was part of the show’s creative team.

In CLOY, we see the contrast between daily life in the South and North in a multitude of ways—from food and technology to luxury and fashion.

High-fashion armorAs CEO of her own company, Se-ri lives an extravagant life in Seoul. Her wardrobe consists of hot-off-the-runway pieces from brands like Dior, Gucci, Balmain, Burberry, Isabel Marant, Giambattista Valli and Bottega Venetta, and designer bags—so many designer bags. Her clothes hug the body and her outfits are tailored, polished and sophisticated—perfect for a power-dressing CEO who’s always out to kick ass. Seoul Se-ri’s clothes are a high-fashion armor of sorts, protecting her from those who could hurt her, members of her family included.

But in the North Korean military village she ends up in, her fashion sense takes a 180-degree turn so she could blend in with the other women living there. She goes from knee-high Jimmy Choo stiletto boots to comfy thick socks and sneakers. She wears cozy cardigans, bulky sweaters, long floral skirts and ukay-chic bohemian prints and layers. The outfits are thrift-shop cool. (Some of them are actually from Marc Jacobs, Ralph Lauren and Giambattista Valli—but let’s pretend we don’t know that.)

North Korea Se-ri is a softer Se-ri who slowly lets her guard down, and it reflects in her accessible, countrified style. But style isn’t sacrificed for comfort—even with her thrifted clothes, Se-ri injects style through her little accessories, like the hankies she ties around her neck.

For an important trip to Pyongyang, she goes through another transformation.

“Pyongyang is not like here,” Captain Ri tells her. “If you don’t want to look suspicious, you should change a few things.”

She shops for new clothes—some tailored pieces and yes, more prints. “It looks corny but somehow hip,” she says. We see her wearing (incidentally on-trend) loose trousers and belted mannish coats. Tight-fitting clothes and blue jeans are a no-no in North Korea. Her clothes in Pyongyang are more formal than in the village. She trades in her sneakers for heels.

The second female lead Seo Dan (played by Seo Ji-hye), a well-traveled classical musician and Pyongyang heiress, meanwhile, is dressed in trendy prairie (read: conservative) dresses, layered under well-tailored coats. (Fashion magazines and references, presumably those from South Korea or the United States, are contraband, as portrayed in one scene.)

“What to put on one’s body, and how to present one’s body in public and private lives do not seem to belong to a realm of individual choices in North Korea . . . it is a matter of strict state policies and regulations,” North Korean culture expert Suk-young Kim told The Guardian.

In a North Korean fashion magazine, NK News writer Alek Sigley spotted this quote from Kim Jong Il who led North Korea until his death in 2011: “Clothing ought to be varyingly made in order to meet modern sensibilities, while at the same time correctly embodying the innate characteristics of our people.”

Se-ri’s hair needed a change for Pyongyang, too. Picking a style from a menu of standard female haircuts (apparently a reality in North Korea), she walks out of the salon with curls sticky from hairspray. “I lost all the volume. That’s why this is called Goodbye Style,” she says.

One of the village women tied a polka-dotted scarf around her head, babushka-style, and said, “Now you look like you could go against the hot bitch of Pyongyang.”