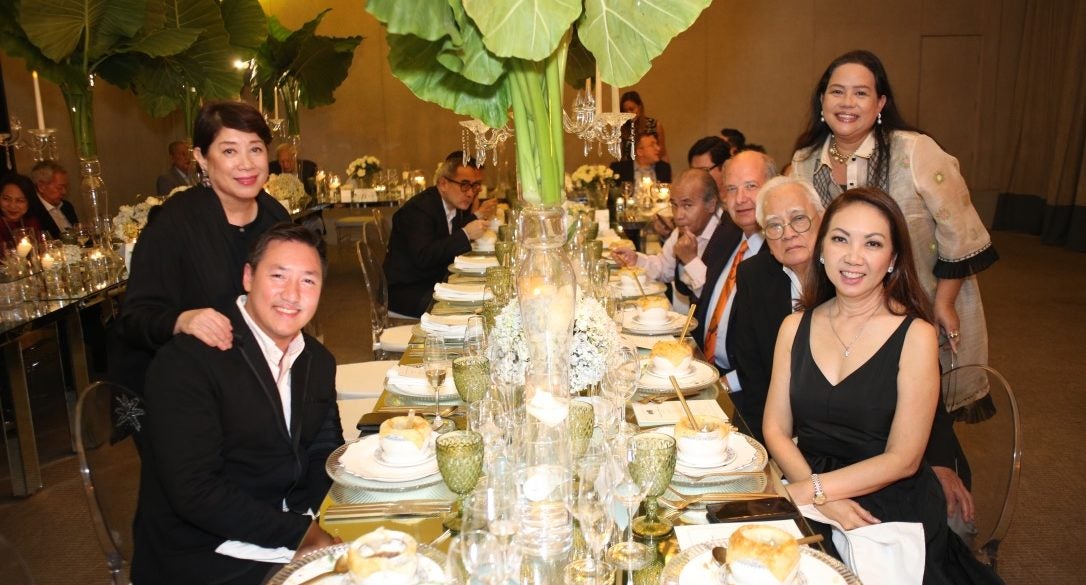 Pabling Calma has been celebrating his birthday every five years, but when the civil engineer who became one of the country’s leading interior contractors turned 90, his family pulled out all the stops to mark the nonagenarian’s milestone. His son, Carlo, worked with mom, Maribel, to translate the occasion into a feast for all the senses.

Guests stepped off the eighth-floor elevator into the Manila House and walked into a room with an epicurean spread. The lavish table was laden with premium appetizers that might have been the main meal for those with smaller capacities.

Two big shallow, gold bowls dominated one end of the cold station. The first held succulent Hokkaido oysters on the shell glistening on a bed of seaweed. An assortment of sashimi was arranged on the other service bowl with hamachi, salmon, Manila House roll with ikura, dragon roll served with ikura, and tuna that was constantly replenished by a chef. Station two also had caviar.

It was the jamón ibérico, however, that kept the likes of chef Chele Gonzalez of Vask coming back to the table. The noble pata negra was sliced in paper-thin slivers and dissolved in the mouth in a mélange of rich, aromatic flavors. The gustatory preamble to the main event was complimented by champagne in flutes generously poured from magnums that Carlo had personally selected.

Pabling was visibly pleased, ambling around the room with glass in hand, thanking family and friends for coming.

The second in a family of six, who was the last among five brothers and a sister to marry, had guests across generations who interacted easily with each other. The gathering eventually sauntered into the Intramuros Ballroom, preempting an orchestrated entrance where everyone would all have walked in at the same time for the dramatic reveal of the dinner setting.

Carlo had enlisted and guided preeminent event stylist Robert Blancaflor to conjure a feast set up on tables configured as double CS. Exaggerated leaves sprung amid white floral arrangements of roses and hydrangeas and glass candelabras. Midway across the room was an elevated stage where a band played and Nicole Asencio sang in intervals throughout the night. A stand-up comedian also provided entertainment but it was the unplanned and unrehearsed song number of Carlo and good family friend Lauren Liechtenstein that proved a highlight of the night.

The sit-down affair began with French onion soup served in a puff pastry. The food was expected to be nothing less than extraordinary with Carlo, the restaurateur known for his highly discriminating palate, taking a direct hand in the menu. A refreshing compressed watermelon salad followed, a plating of the fruit with arugula, pine nuts, cherry tomato and Davao goat cheese.

Maine lobster headlined the third dish, served with Aglio Olio. Had the dinner ended with this, it would have been a satisfying finish, but the fourth course was Omi Wagyu Sirloin on a plate with cauliflower puree, sautéed garlic, French beans, Truffle Tare, served with mascarpone mashed potato.

Pabling’s other son, JP, took to the mic and gave a tribute to their dad. He read a letter he wrote to his father for the occasion, thanking him for “teaching me to build beautiful things.” The elder son said, “I consider myself not a son of a contractor but a son of a carpenter whose works are beautiful and have stood the test of time.”

He added that perfect construction quality could be achieved only “when it is done with sincerity, diligence and care.”

Carlo shared vignettes that provided glimpses into what the younger Pabling had been like. The young architect praised their patriarch for his charisma and sense of style that caused people to conclude he was younger than his actual age. The father and son work closely together although Carlo considers himself a maximalist and his dad more of a minimalist.

Carlo recalled waking up and finding the living and dining room arrangements changing every day until the elder Calma achieved what he felt was the exact placement for the furniture.

“He likes constant change… [which] I think makes him truly alive. The constant dreaming of impossible dreams even now at 90 is truly admirable… He doesn’t have retirement in mind. Every day in the office, he constantly knocks on my door when he has an idea. This constant dreaming is something I admire and aspire [to have]. My dad, the dreamer, has already fulfilled all his four dreams, including being able to move around without a cane at 90.”

He ended with a toast to “this dreamer, who is irreplaceable and whom we all love, that he may have more happiness, fulfillment, and a longer life to see my future children and for us to work on bigger dreams together.”

A long cake with 90 candles was wheeled in on cue and the room rang with voices singing the birthday song. Pabling got help from his brothers in blowing out the lighted candles. He thanked everyone who came and in a remark that conveyed his forward-looking outlook, enjoined everyone to be around for his 100th year birthday. The guests laughed but he certainly was not joking.—CONTRIBUTED