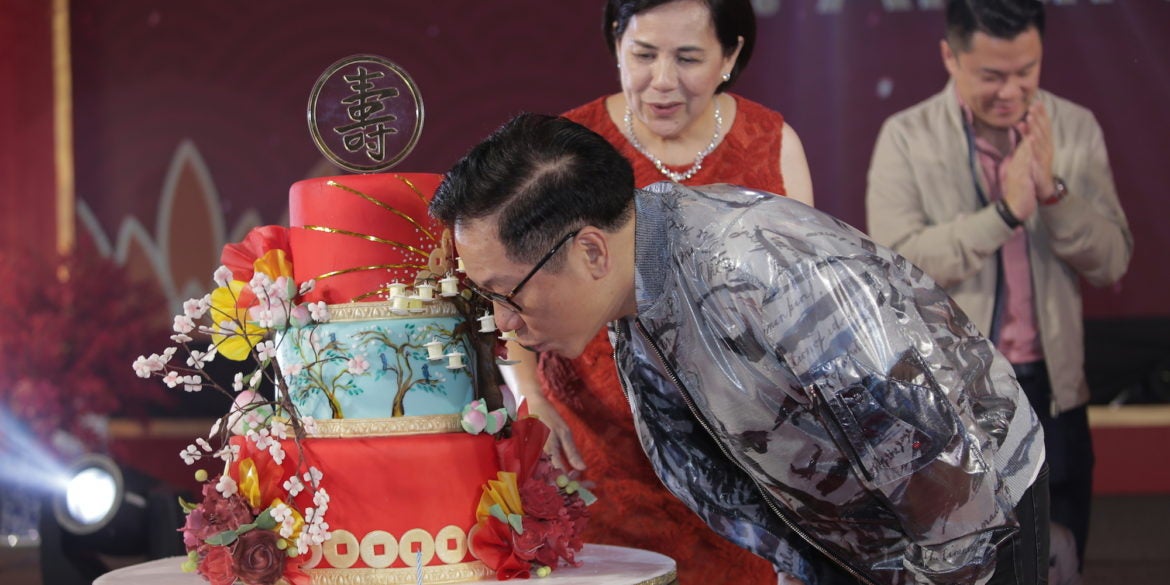 Dr. Andrew Tan was astounded by the sudden glare of the spotlight as he entered the Manila Ballroom of Marriott Hotel Manila. Hundreds of familiar faces started waving and dancing to the tune of “Can’t Take My Eyes Off You.”

He walked reluctantly toward the aisle, a confused grin on his face. It was only as his closest relatives and friends walked toward him to greet him did he realize what the celebration was about.

The Tan family, led by wife Katherine, planned the surprise birthday party for this fine Sunday, two weeks ago, for Tan, who was turning 68. The tycoon is one of the youngest patriarchs in Philippine business.

The party was attended by around 300 guests, mostly immediate family and friends, as well as executives and officers of his various companies.

Just as the night started, Mrs. Tan, with her children Kevin and Kendrick, their wives Michelle and Rain, and five grandchildren led the birthday song and the blowing of candles. The auspicious Spring Festival-inspired cake was specially designed by Marriott Manila. It bore the Chinese character for “long life.’”

The night was highlighted by an eight-course dinner, Chinese lauriat-style, and a copious spread of desserts and pastries in a buffet setup.

McDonald’s Philippines founder George Yang’s renditions of “Impossible Dream” and “My Way” were the fitting starter of the tribute to Tan, who gamely did an impromptu duet with Yang. His children and grandchildren also had surprise song performances.

Another highlight was the appearance of world-renowned master distiller, Richard Paterson, who flew in from Scotland to unveil the Dalmore 68, a special Scotch whisky blend dedicated to Tan on his birthday. This blend brings together liquids from the birth years of Tan’s four children, drawn from his company-owned Dalmore Distillery in Scotland.

The surprise party and dinner turned into a music fest, as retro band Spirit of 67 jammed with the guests and sang some of Tan’s favorite songs.

It was indeed a night of memorable surprises, and to think Tan almost went to Marriott in shorts—his usual Sunday garb! Thanks to strategic planning, the surprise went without a glitch. —CONTRIBUTED