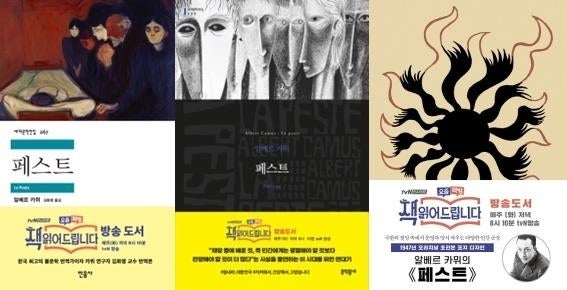 SEOUL — More and more Korean readers have found themselves cracking open “The Plague” by Albert Camus anew, amid the spread of the novel coronavirus.

The Camus novel was published in 1947 and is set in the same time, though it is believed to be based on the cholera epidemic that killed a large percentage of the population in the French Algerian city of Oran in 1849.

“The Plague,” which portrays people’s diverse responses to the plague, won the French Critics’ Prize in 1947 and also led to the Nobel Prize in literature for the French Algerian author in 1957.

Kyobo Book Centre, the nation’s largest bookstore chain, on Sunday said 3,500 copies of “The Plague” were sold between Feb. 1 and Thursday, which is over 18 times more than the number of copies sold during the same period in 2019. The bookstore added that it is currently carrying “The Plague” in Korean published by more than 20 different publishers.

“It is unusual for a classic novel to appear on the bestselling list and to see a surge in sales, as the list is usually filled by new books,” a Kyobo Book Centre official said in a statement. According to the bookseller, sales appear to have jumped largely due to increased curiosity about infectious diseases as the novel coronavirus spreads. It added that sales soared markedly after broadcaster tvN on Tuesday aired an episode about the book on its show “The Page Turners.”

As of Sunday, the book also ranked at the No. 2 spot on the bestseller list of online bookselling platform Yes24. The list is based on accumulated data of the sales and number of orders during the last seven days on its platform.

E-book readers are also showing keen interest in the book.

“Since the second week of March, ‘The Plague’ has been on our popular e-books list,” Millie’s Library spokesperson Jeon Som-yi told The Korea Herald. Millie’s Library is a local subscription-based e-book service provider.

“Even on our monthly list, the book is ranked at 14th place, which shows high interest. And around 5,581 people are currently listening to the book,” the spokesperson said Sunday. As of Sunday, “The Plague” also topped the e-book startup’s daily best e-book list.

“The Plague” also ranked at No. 2 of popular books on e-book service provider Ridi Books.