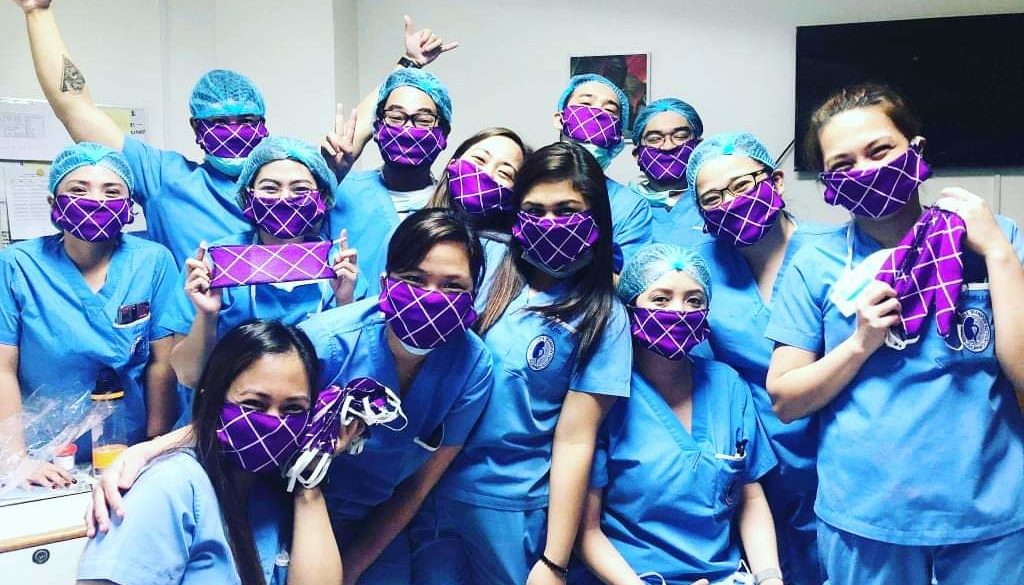 Staff members from the National Kidney and Transplant Institute were the first to receive Domz Ramos’ masks./PHOTO PROVIDED BY DOMZ RAMOS

MAKATI CITY, Philippines — For four straight Christmases now, swimsuit designer Domz Ramos has been going to different provinces to distribute dolls to poor children through his “Ma-Barbie ang Pasko” caravan. But now that the country is facing a health emergency, the fashion entrepreneur turned to mask-making to offer solace to his countrymen.

“I have already made thousands of face masks that my team donated to hospitals. The first batch was delivered to the National Kidney and Transplant Institute (NKTI),” Ramos told the Inquirer in an interview via Facebook Messenger.

He said that other hospitals started sending him a message on Facebook after seeing his post about the NKTI donation, asking if he can provide some more masks to their respective institutions.

As of writing, Ramos was able to send masks to the Philippine General Hospital, QualiMed Hospital in the City of Santa Rosa, and his own Barangay Bagumbayan in Taguig City.

He has also donated masks to nuns under the Daughters of Saint Francis.

“I was really touched when the nuns sent me a note and a rosary after they received the masks I gave them,” Ramos shared.

The note, written by Mother Encarnacion, reads: “We are very grateful to God and to you for your generosity. God bless you and keep you. You are in our prayer.”

The masks were made out of the extra rolls of fabrics from the numerous swimsuit collections he made for several local and national beauty contests, including the 2019 and 2020 editions of the Binibining Pilipinas pageant.

“They are cotton spandex. The mask was easy to pattern. We just got a readily available sample and made our own adjustments from it,” Ramos shared.

“These are leftover fabrics anyway. I’ve been buying by the bulk, so there is enough material to work with,” he added.

Ramos also expressed gratitude to his team of seamstresses and some of his relatives who have been helping sew masks.

“There are about 10 of us, I also have quite a big family. They, too, have been involved in ‘Ma-Barbie ang Pasko’ so I really owe them a lot,” he shared.

However, the “enhanced community quarantine” imposed by the national government on the whole of Luzon region has made it difficult for Ramos to personally deliver the masks himself, because of the checkpoints and other transport restrictions in different city boundaries.

“I rely on Lalamove and Grab for delivery. It’s not that easy going to the hospitals, especially now that they are trying to contain the infections there,” he said.

But it was as early as January when Ramos started his mask donation when the country was beset by a calamity caused by the eruption of Taal Volcano.

When it erupted in January, the volcano spewed ash that blanketed nearby towns in Batangas, and even Tagaytay City. Some areas in Metro Manila also experienced ashfall.

The calamity sent people in a mad rush for N95 masks and other dust protection, which caused scarcity in Metro Manila and Southern Luzon.

“We were able to donate about 5,000 masks in January to the areas affected by the Taal eruption,” Ramos shared.

The designer also said he is delighted to see that some of his colleagues in the industry were inspired by his actions, and started making masks and donating them.

To the Filipino people, Ramos said, “let’s do our part by staying at home. May we learn how to be patient and prayerful in a situation like this.”