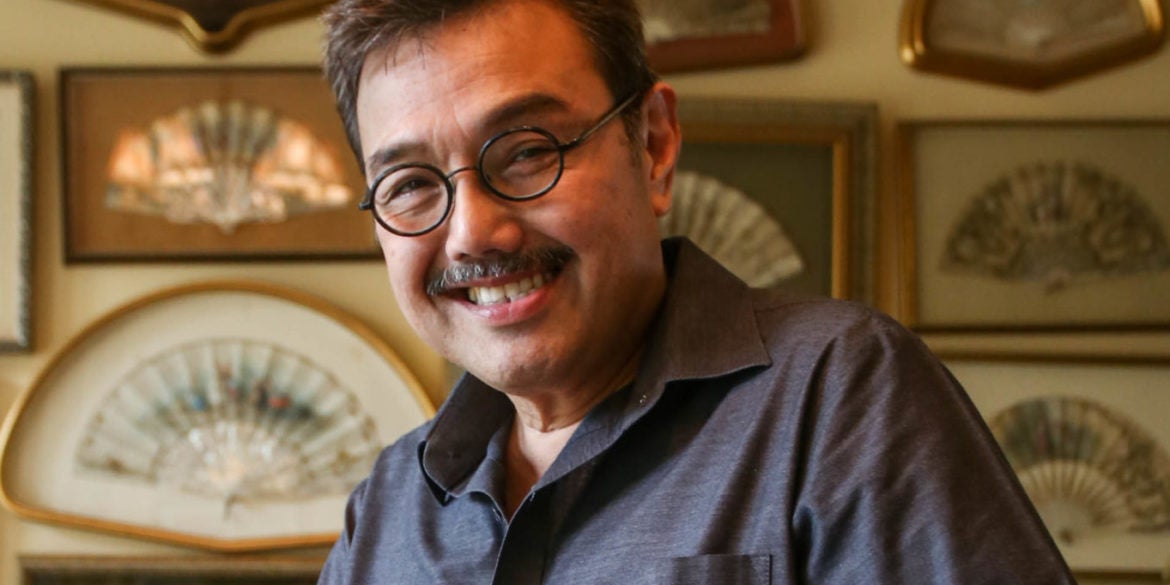 “I’m self-conscious about my midsection. Can you make sure it doesn’t look big?” Ito Curata asked our photographer—sweetly, because he was always sweet—as he posed for a photo amid his vintage fan collection in his home office.

Then he turned to us and said deadpan, “You know, after Taj”—the son he and partner Robert Miller adopted—“I never got my figure back.” We had a good laugh.

Fashion mourns the loss of one of its most liked designers. Curata, 60, succumbed to pneumonia believed to be related to COVID-19 March 26. Miller reportedly remains in critical condition, also stricken with pneumonia.

In August 2019, we paid Curata and Miller a visit in their home in a gated village south of Manila, which Curata designed when he and Miller decided to move to the Philippines after 29 years of living in San Francisco, California. It was in the Bay Area where Curata, a visual artist who painted and did photography, built a name as fashion designer, dressing the likes of Hollywood star Sharon Stone.

It was Miller, a warm, gracious American, who by then had retired early from a senior executive post in a financial company, who suggested the idea of moving to Curata’s home country. They lived in a four-story home in SF’s Twin Peaks, “though not quite this large,” said Miller. With SF’s housing increasingly becoming more expensive, paying for their remaining mortgage, taxes and insurance no longer felt judicious.

Most of their furniture and objects in their Manila home were from their house in SF.

Curata was mighty proud of the home he designed, with columns inspired by Ann Getty’s home in SF’s Pacific Heights. He wanted one that was like “a mansion you inherited from your grandparents,” the Batangueño told us with a wink. “This is how we live, what we’re comfortable with. It’s my dream home.”

For many years, it was in this large house with cathedral ceiling and dramatic winding staircase that he and Miller hosted dinner parties, up to four a month. They loved to entertain, but never used a caterer. Curata cooked his “killer binagoongan and callos.” He also built a room for his mother for whenever she came to visit.

It was also in this house where they built their little family, after the couple adopted Taj. Since Taj came along, the couple has stayed put and rarely traveled. They didn’t want to be absentee parents. “Ito is not an early riser, but he gets up to take him to school,” Miller said.

Curata loved that their bedroom overlooks the golf course of the country club. He liked the greenery. “I’m a probinsyano at heart,” he said. His workshop was in Las Piñas, about 12 minutes from their home. “Outside it’s so magulo and maingay. I just like to come home to simple and quiet.”

We would see Curata one more time, in November, at a party. He took a photo of us and an acquaintance with his ever-present point-and-shoot and later posted it on Facebook. Up until mid-March, we would still see common Facebook friends tag him in photos from the parties he and Miller attended.

There will be no more new party photos of Ito.