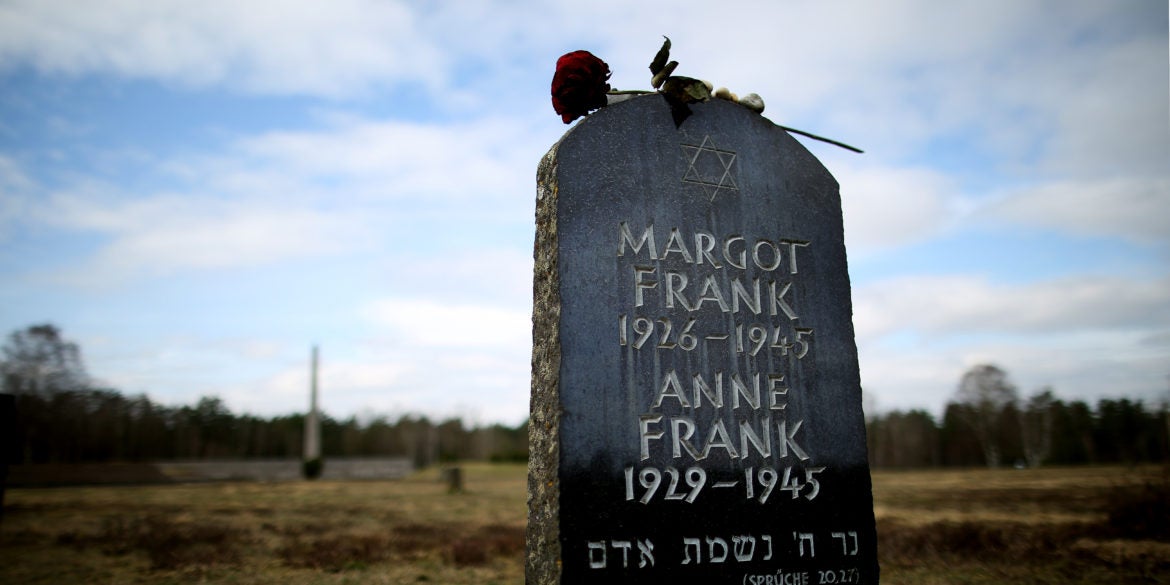 A memorial stone for Margot Frank and Anne Frank is pictured on the grounds of the former Prisoner of War (POW) and concentration camp Bergen-Belsen, on March 18, 2020 near Lohheide, north of Hanover, central Germany. - German-born Dutch girl Anne Frank, world famous for her diary, and her sister Margot Frank died at the Bergen-Besen camp around end of February / beginning of March 1945. British troops discovered more than 10,000 bodies when they liberated the Bergen-Belsen camp 75 years ago, on April 15, 1945. (Photo by Ronny Hartmann / AFP)

Anne Frank’s diary more relevant than ever, 75 years on

AMSTERDAM — A lifetime ago, a Jewish girl confided in her diary as she spent two years in isolation from the outside world in a doomed attempt to escape mortal danger.

Anne Frank, a teenager from Amsterdam, wrote of her hopes, fears and dreams as she and her family hid from the Nazis in a secret annex behind a canal-side house.

Seventy-five years ago this year, after their hiding place was discovered, Anne died of typhus in the Bergen-Belsen concentration camp in Germany, aged 15.

But the diary that her father published after World War II won a worldwide audience as a reminder of the horrors of the Holocaust, and remains more relevant than ever.

“The most important part of the diary is that it offers some insight into what it means to be human,” Ronald Leopold, executive director of the Anne Frank House museum in Amsterdam, told AFP.

“That is exactly why it has remained relevant during the 75 years after the Second World War and why it will remain relevant, I am absolutely convinced, for generations to come.”

The “Diary of a Young Girl” has become one of the world’s most-read books, selling 30 million copies and being translated into more than 70 languages.

But it had humble beginnings, as a birthday present for the 13-year-old Anne.

Born in Frankfurt, she moved to the Netherlands aged three with her parents Otto and Edith and her older sister Margot to escape rising anti-Semitism in Hitler’s Germany.

But in 1940, the Nazis invaded the Netherlands, and then stepped up their persecution of the Jews there too.

Anne began writing shortly before the family went into hiding in 1942 in the secret annex that Otto Frank had built behind his business premises on Prinsengracht, one of Amsterdam’s most beautiful canals.

Addressing her diary as “Dear Kitty”, over the next two years she described her thoughts and feelings about life in isolation with her family and the four other Jewish people they lived in hiding there with.

Life in the annex was hard. Anne wrote with searing honesty about her feelings towards its other occupants, in particular her difficult relationship with her mother.

She also harbored serious ambitions of being a writer, penning stories and starting her own book about her experiences.

Through it all, there remains the voice of a schoolgirl examining her place in the world — just like today’s young people, says Leopold.

“She’s their peer. They recognize her voice, what she was thinking of, what she was doing when she was struggling with her relationship with her mother,” he said.

There are several theories about why, including that the Franks were betrayed by neighbors or because of black market activities in the warehouse below, but as Leopold says “it’s all unsubstantiated, so we don’t know.”

The Franks were transported by train to the Auschwitz concentration camp — but were split up and Anne and Margot were sent to Belsen.

Both sisters contracted typhus and Anne is believed to have died some time in February 1945, two months before Allied troops liberated Belsen on April 15.

After the war, Otto Frank returned to Amsterdam to find his wife and daughters dead and the house stripped.

In all, only 38,000 of the 140,000 Jews who lived in the Netherlands survived the Holocaust — one of the highest percentages of any European nation, and a lasting shame for the country which only this year issued the first government apology.

But the diary had been saved by Miep Gies, one of the people who had helped those in the secret annex.

After several rejections, it was published in 1947 in Dutch, said Leopold, although it did not become the phenomenon it is now until it was finally published in English in the United States in 1952.

Over the years further research into the papers has revealed different sides to Anne.

Passages about her sexuality as well as Edith Frank that Otto Frank had edited out of the original version were restored in later editions.

The diary’s immediacy means it has kept its relevance, especially in the “challenging times that we live in in 2020” with the “rise of nationalism, the rise of the extreme right wing,” said Leopold.

“What was done to Anne Frank was the work of human beings, and I think it’s important to learn about that.”

The Anne Frank House — which is currently closed to the public because of the coronavirus but continues its educational programs — is now focused on communicating her legacy for the next 75 years, as memories of the Holocaust fade.

That can be a challenge, Leopold admitted, with younger social media obsessed visitors seemingly as interested in taking selfies as in history.

But, he said, that interest in her story was “increasing rather than decreasing”, with half of the Anne Frank House’s 1.3 million visitors a year being aged under 30.