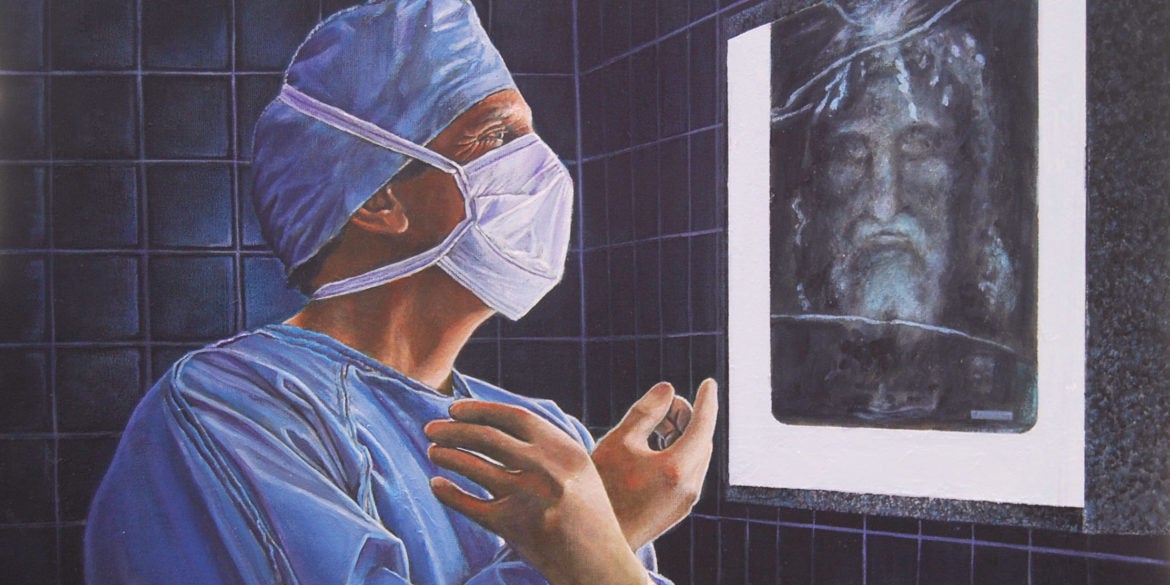 Brazil did a 3D video mapping art on the famous Christ the Redeemer monument in Rio de Janeiro while well-loved blind Italian tenor Andrea Bocelli performed an Easter concert at the Duomo or Catholic cathedral of Milan, keeping people’s spirits hopeful despite the pandemic.

But other performing and multimedia artists in the Philippines and other countries have also produced artistic initiatives in keeping with the Easter spirit in these new coronavirus disease (COVID-19)-fraught times.

According to Aleteia (https://aleteia.org), Rio de Janeiro Archbshop Orani Jao Tempesta celebrated Mass atop the Corcovado mountain at the foot of the monument. During the Easter Mass, the famous 125-foot monument was lit with images of medical professionals and words of thanks for their efforts to combat the coronavirus. The statue was also illuminated by images of the flags of countries fighting the outbreak, such as Brazil, United States, Italy and Spain, as well as the words “home,” “thanks” and “stay home” in the various languages.

In the Philippines, the Manila Symphony Orchestra (MSO) has produced a record in which members on quarantine individually perform “Nella Fantasia” (“Gabriel’s Oboe”) by Ennio Morricone from the much-awarded movie about Catholic missionaries, “The Mission” by Roland Joffe. The individual performances are melded into an “orchestral” whole via music video (MV) posted on Facebook

“Let us keep our humanity and connectedness through our music,” MSO declared.

National Artist for Music Ryan Cayabyab has composed “We Heal as One” as an anthem for these difficult times, and the song has been recorded by an all-star cast. But Iloilo City has come up with an Ilonggo version of the song and produced an MV in which “Various Ilonggo Artists” appear. Available on YouTube, the MV shows Iloilo health front-liners as well as the rest of the community coming together in a show of unity amid the emergency typical of the very cohesive and proud Ilonggos.

Meanwhile, Philippine priests led by Daet Bishop Rex Andrew Alarcon, the country’s youngest bishop, have recorded on quarantine Jamie Rivera’s “Hilumin Mo, Bayan Ko” and their individual recordings are melded in an MV introduced by former Manila Archbishop Luis Antonio Cardinal Tagle, now the head of the Sacred Congregation for the Evangelization of Peoples in the Vatican.

The Communications Bureau and Tiger Media Network of the University of Santo Tomas (UST) have made an MV of an original song, “Malalagpasan,” which gives tribute to health front-liners in the fight against COVID-19.

“The song was meant both as a tribute and a morale booster. Thus, apart from having the lyrics, the video of Thomasians sending their well-wishes was included,” said Fr. Jeff Aytona, head of the UST bureau. “We want to assure our front-liners that apart from lending material help, we are there for them emotionally and spiritually.”

The MV showed various individuals or groups holding out “Thank You” signs as shoutout to health front-liners.“Easter is a time for renewal and a time for us to appreciate sacrifice,” explained Fr. Aytona. “The Savior is the perfect embodiment of sacrifice, laying down one’s life for the redemption of others. Our front-liners are also in their own way sacrificing—and sometimes, at the cost of their own lives. This kind of self-giving should not go unnoticed and unappreciated.”

Those who are into the celebratory but still solemn mood of Easter or who go for contemplative music may want to check out the Neumz Project of the Benedictine nuns of Jouques. It is said to be the biggest musical recording project ever since it attempts to document all Gregorian chants as sung by the French Benedictine sisters based in Provence. “In these moments of seclusion and self-isolation,” says Neumz on its website (www.neumz.com),” the Benedictines of Jouques open the doors of their cloister and invites us to reconnect with our essence, in communion with each other in prayer through the Gregorian Chants.” One may listen to the Eastern Sunday laudes—some three hours of divine listening—on the Neumz website or on YouTube.

A contemporary Eastern Christian icon honoring physicians battling COVID-19 has been making the rounds of the social media, according to Aleteia. The icon shows the physician flanked by St. Luke, patron saint of physicians, and the Virgin Mary. At the top is Jesus.

“While the (artist) seems well acquainted with the tradition and canons of Byzantine iconography,” Aletei reports, “several details, such as the stethoscope, the hospital represented behind it and the pens in the doctor’s pocket, allow us to affirm it’s a modern icon. It seems that the iconographer was inspired by the Slavic Orthodox icon of the Virgin Mary Healer, which the Russian Orthodox Church celebrates on Oct. 1”

Meanwhile in the Philippines, acclaimed physician-artist Dr. Dante Lerma has produced a classical realist acrylic painting, “Fides,” showing a physician with a mask examining the x-ray of a patient with the famous alleged face of Christ from the Shroud of Turin.

Employing his well-known graphic and pictorial skills, Doctor Lerma, a member of the UST Health Service, perfectly reproduces the famous Turin shroud negative image taken by Italian photographer Secondo Pia in 1898, which has become a devotional icon of Christ to Catholics all over the world.

In making the negative the X-ray of the patient, Lerma makes the COVID-19 patient a Christ figure and the embodiment of suffering that the physician in the painting has to heal. The painting is as much an expression of faith (“Fides” means faith) as it is an homage to the acts of mercy and charity that health front-liners do in order to save the sick and the dying.

In his previous exhibits, Dr. Lerma has done paintings of Padre Pio, the famous Capuchin stigmatist saint, and the Blessed Mother.

Meanwhile Rachel Fatima Jose Clamor, 23-year-old niece of historian and former National Commission for Culture and the Arts commissioner Regalado Trota Jose, has drawn a contemporary update of the iconic “Pieta” , showing the Madonna in Filipiniana costume and cradling a masked COVID-19 patient on in her arms.

Meanwhile “Himati” records readings of Bicol poetry by Bicol celebrities, according to award-winning poet-filmmaker-publisher Kristian Cordero. “Himati” is the Bicol word for a deeper form of listening and feelings.

Cordero said Savage Mind, an independent bookshop and cultural hub, and the Ateneo de Naga University Press, had recently launched Himati: A Bikol Poetry Program that features works of Filipino poets particularly those who are the Bicol region.

As a first offering, noted stage and film actor Jaime Fàbregas, who is from Naga City, read the poems of Luis Dato from Baao, Camarines Sur, Luis Cabalquinto from Magarao, Camarines Sur and Marne Kilates from Daraga, Albay.

Dato is one of the pioneering poets writing in English at the beginning of the 20th century. He eventually became a respected journalist and a “Bikolista” in his later years. Cabalquinto and Kilates are contemporary poets mainly in English, but who have lately turned to writing in Bicol.