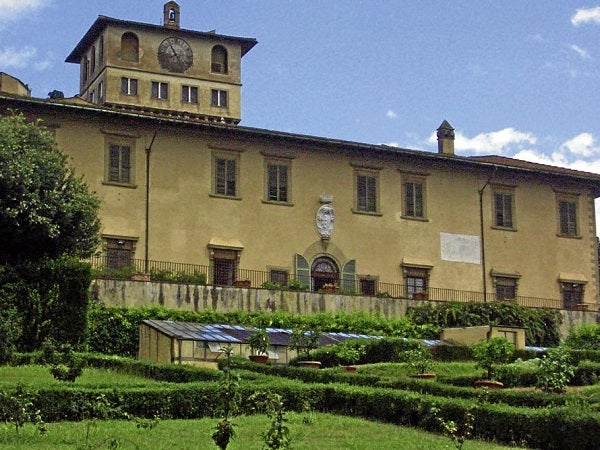 Checking out the Medici in Florence–using a little Hiligaynon

It was to be the last full day in Florence for my mother and me. We were set to fly back to Manila the next morning. In a bizarre act which could only be attributed to jet lag, we had paid to tour Sienna at the very same time that we were supposed to be leaving. It was our hotel manager who alerted us to the problem. Strangely, we were quite aware of our departure date; yet we still made the booking. Somewhere in our brains, a synapse was obviously not working.

Feeling frustrated upon learning that the tour company would not refund our fees, my mother declared that we should make the most of the time left us. We should go out and visit a worthwhile site. Having already enjoyed much of what the great city on the Arno had to offer, we discussed our itinerary. The Museum of Archaeology was mentioned, so was the Museum of Ethnography.  Clearly we were running out of options.

Just the day before, we had visited the Church of the Carmelites in the Oltrarno to see the chapel painted by Masaccio with scenes from the life of St. Peter. This chapel will forever be burned in my memory for the fact that in the reverent silence that enveloped the place as awed tourists tiptoed around, my mother’s cell phone rang. To this day I can recall how the lovely Renaissance murals served as backdrops for a one-sided conversation conducted in a very loud voice: “indi ako kabati sa imo!”(I can’t hear you!).  When I noticed that people were turning to me with arched eyebrows, my instinctive reaction was to point to myself and say “Japanese! Japanese!”

Fortunately, we were able to exploit the obscurity of a dark auditorium set up in what may have been the old sacristy. Here a documentary was shown that included animated segments based on the Masaccio paintings. We watched, spellbound, as St. Peter walked down a road, his holy shadow falling on sick penitents, healing them instantly. It was a fascinating example of how contemporary technology could revitalize ancient art.

Returning to our itinerary dilemma, it had become clear that there was very little left in the great City that could still enthrall us. Then my mother had an inspiration: why not visit the Medici Villas in the surrounding countryside?

At the height of its power, the Medici family controlled the largest bank in Europe. The family eventually managed to install themselves as the rulers of Florence and Tuscany. The various clan members owned not only sumptuous urban palaces but also delightful rural retreats. According to the guidebook, among the closest to the city were Villa La Petraia and Villa di Castello.

When a woman in a tight black uniform and a cap issues you a command, you obey. I got out and finding that the place was indeed open, we parted with our martinet of a driver and entered the compound of La Petraia.

What awaited us would turn out to be an earthly delight. Lush hedges and ivory gravel paths were everywhere along with citrus trees bearing fruits. Renaissance gardens were modeled after those of Ancient Greece and Rome. Classical herbal treatises were consulted for plants to propagate. Walkways, fountains, and statues were laid out to emulate what a Roman emperor had in his own pleasure palace. Clearly the parallel was being drawn: the Renaissance rulers were the new Caesars.

La Petraia, which was acquired by the Medici in the 16th century, is built on a bluff with a panoramic view. We know that this view was definitely the focus of attention because the house has a mirador, a central tower from which the surroundings could be surveyed. This tower was quite likely part of the edifice’s original design. It is already present in a lunette of La Petraia painted by Giusto Utens in 1599.

As my eyes swept across the countryside while standing on the terrace, I marveled at the distant edifices of the city of Florence. I saw the tiled roofs of buildings above which rose, like self-confidents boasts, Brunelleschi’s great dome and Giotto’s campanile. Yet I also saw factories and tract housing as contemporary mundanity encountered Quattrocento magnificence.

Over the doorway of the great house we glimpsed a coat of arms with six balls: the iconic symbol of the Medici clan. Inside we were surprised to find that the central courtyard was covered with a huge metal and glass roof added more than a century ago by King Victor Emmanuel at a time when Italy’s capital had moved, briefly, to Florence. He also had the walls frescoed with allegorical scenes. Admittedly, the final effect was chaotic and incongruous with the studied restraint of the rest of the mansion.

While touring the interiors we were joined by a couple from Belgium. They later invited us to drive with them to the nearby villa of Castello which was just minutes away. This imposing retreat is associated with Lorenzo de Medici who purchased and refurbished it in 1477. It was here that he was supposed to have kept two celebrated works by Sandro Boticelli, The Arrival of Venus (also known as the Birth of Venus) and the Primavera. One writer has commented on how the fact that both paintings were done on canvas could be an indication that they were to be brought out to a country home instead of being displayed in a city residence. Certainly, the plants depicted in the paintings were much like what could still be seen in Castello’s charming gardens.

Walking past Villa di Castello’s fragrant clumps of lavender and pots of scarlet hibiscus, I also spied orange trees and roses which, in the Boticelli masterpiece, awaited the goddess Venus as her shell vessel drifted toward shore. The classical references are all part of the image of erudition and refinement which the Medici carefully cultivated. In the game of power, impressing guests with a well-appointed house can be just as effective a tool as a formidable army.

Since the friendly Belgian couple gave us a ride back to the City, we returned the favor with an invitation to lunch. As we had gotten back quite late, most restaurants were closed. We had to settle for Giglí, a rather touristy establishment right on the Piazza della Repubblica.

While waiting for our food, I tried to think of what to discuss with someone from Belgium. Soon I had it: Hercule Poirot! Jean Claude Van Damme! Our luncheon mates smiled broadly with what I hoped was approval. The conversation mercifully turned to the houses we had seen and how their owners came from a family that had produced two queens of France. It struck me how these queens were always associated not with their place of birth but with their clan name which—as was very obvious in French—was rendered in the plural: Catherine de Medicis, Marie de Medicis. To put this in contemporary terms it would be like saying Gloria of the Diazes!

This nomenclature was a tribute to the stature that one family had been able to achieve, building a reputation that would command attention for centuries. Such an achievement meant a ruthless pursuit of power, a crafty ability to master the game of statesmanship. It usually involved forging alliances and cutting deals.

Sometimes, though, as we had seen that afternoon, it could mean knowing just where to plant a lemon bush or how to position a tower so that it had the best vista of endless fields.