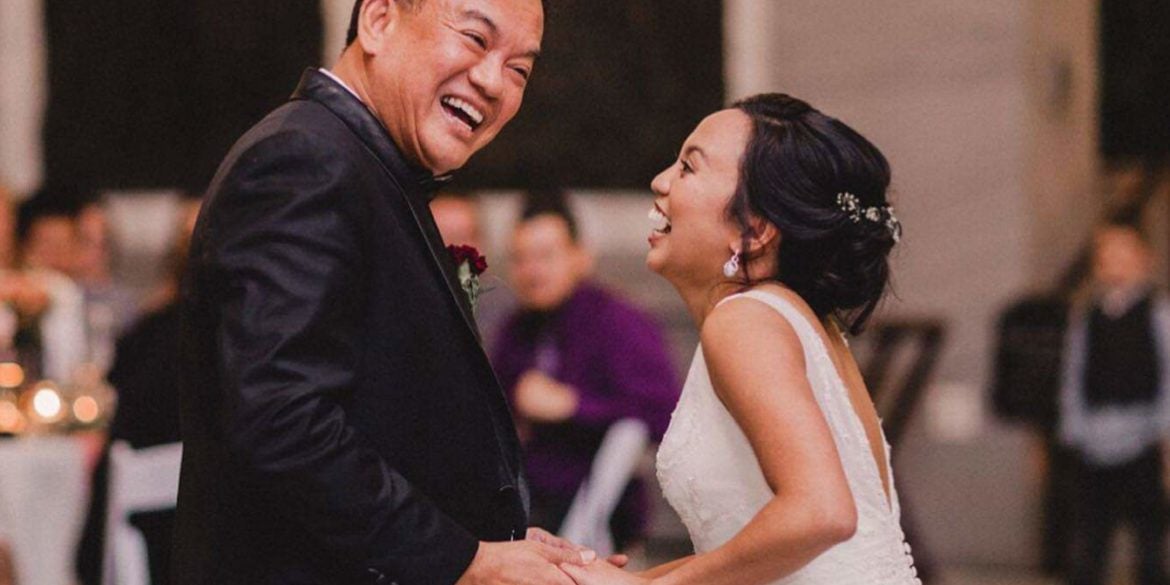 Dr. EphraimNeal Orteza dances with daughter Patsy at her wedding.

Three weeks before he died of the new coronavirus disease (COVID-19), Dr. Ephraim Neal Orteza was worried about his niece, Sara Siguion-Reyna, daughter of his sister, the writer and actor Bibeth Orteza.

Sara, then in the emergency room, had amosnia—the absence of taste and smell—which was related to her severe sinusitis.

Bibeth told Inquirer Lifestyle how concerned Dr. Orteza, or Bimboy, was about his niece: “He kept on texting, and even sent me a list of meds usually given to COVID patients. Then he called, ‘If they give her those meds, she most likely has COVID-19 but is asymptomatic. If they give her another set of meds, it may not be COVID-19, but she’ll still have to quarantine for 14 days in her room.”

While talking on the phone, Bibeth said she heard Orteza’s wife, Emy, ask him: “May fever ka pa?”

On April 8, Orteza—CEO and co-medical director of Olivarez General Hospital (with his wife, Dr. Imelda Olivarez Orteza) and hospital administrator of Ospital ng Parañaque I and II—became another fatality in this pandemic, which has claimed the lives of over 1,000 health-care front-liners in the Philippines. He was 64.

‘We were poor but we had each other’

Orteza was the third of eight children of Samar natives Cornelio Orteza, a lawyer and lay minister, and Pascuala Cabuñag, a schoolteacher who also worked with the Red Cross.

“Our father brought us up with this simple rule: ‘Before you put food in your mouth, look to your left, and then to your right. Someone may be hungrier than you. Share,’” said Bibeth, who was older than Bimboy. (Their eldest sibling, Jose Neal, died at age 2.)

One New Year’s Eve, Bibeth recalled on her Facebook page, there would be “close to nothing for the traditional Noche Buena, and the one good thing we had was a firecracker, a whistle bomb. Bimboy set it up to go straight out of the gate of the Guerrero property, where we were renting the last door apartment at the far end of 4864 Guadalcanal Street. But he set it up wrong, and it careened, chased us instead up to our very door, where we collapsed, laughing.

“There was little on the table that night, but there was laughter, gales of it, as every time our eyes met, Bimboy and I laughed like we invented laughter. We were poor but we had each other.”

As a child, Orteza had a wicked sense of humor. Bibeth recalled that, as a six-year-old praying before the evening meal, he would say, “Lord, thank you for this food, even if the viand is not good.”

He fancied himself as a future hero, which made Bibeth laugh. She laughed loudest when their mother discovered a small wooden chest where Bimboy had kept some neatly folded clothes, notebooks and scribbling, soon after his first visit to the Rizal Shrine in Intramuros. “He said, ‘Para ’pag naging hero ako, hindi na sila mahirapang maghanap ng gamit ko.’”

Growing up, Bibeth regarded him as her best friend and best enemy. He was “the more studious one who knew he wanted to be a doctor since grade one, he earned regular praise for good grades from our Mama, until the day he put the frozen cat he was dissecting in our refrigerator freezer.”

Bibeth said that Orteza’s ambition to become a doctor was somehow a result of their eldest brother’s early death from cerebral palsy: “Well-meaning relatives from our maternal side would say stuff like, ‘Kaya ikaw, mag-duktor ka, manggagamot ka ng mga bata!”

When he married Imelda Olivarez, Orteza asked Bibeth’s mother-in-law, the entertainment icon Armida Siguion-Reyna, to be wedding sponsor. Bibeth told him that Armida didn’t go even to her own wedding.

“Before the reception ended, he whispered to me, ‘Talo kita. Si Tita Armida nasa wedding album ko. Sa iyo, wala! Hahahahaha!’”
Bibeth said she would always consult Orteza about health—they were both diabetics. “He also knew I’m asthmatic, I’m this, and that. So, like, when I had a cold, I asked him what I could take and he gave me what was safe.

“He was just a text or call away. He’d always respond, without fail. He was like that, not only to me, but to his staff. Even when attending a party, he’d regularly check his cell phone for patient updates. Magte-take off na lang ang eroplano niyan, sasagot pa rin.”

What would she like to remember most about him? “We grew up affectionately calling each other ‘pangit.’ It was Mama’s way of teaching us to let insults slide off. ‘Pangit’ somewhat became the secret code for ‘I love you’ among us siblings.

“And this is how I will always remember Bimboy, my ‘pangit.’ I miss you so much, my pangit!” INQ