High and dry: Icelanders inconsolable without their pools | Inquirer Lifestyle 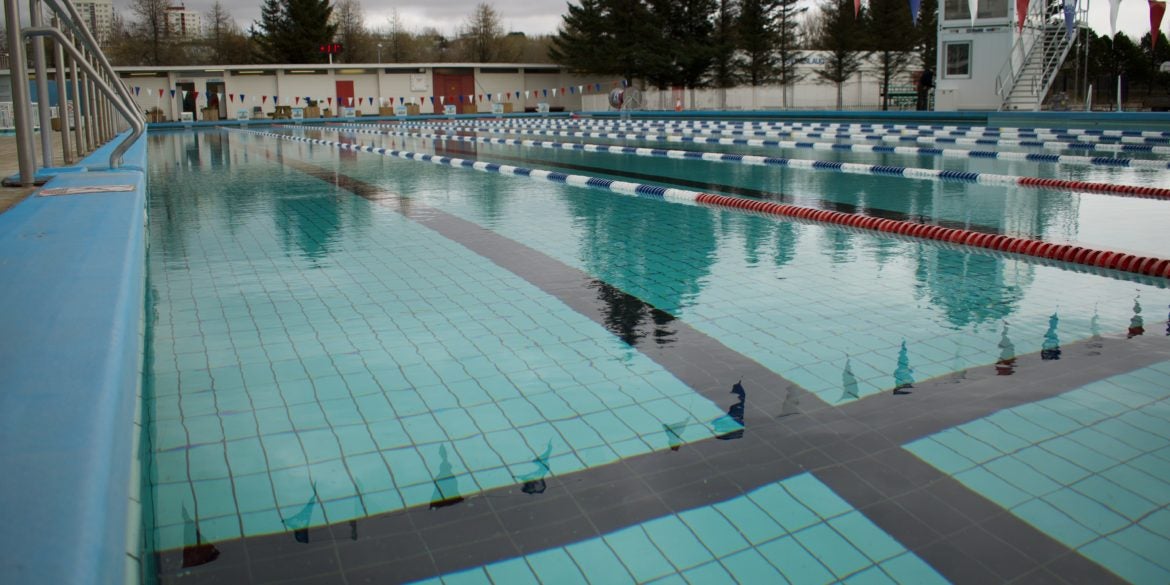 This picture taken on April 27, 2020, shows a view of the 50m outdoor pool at the biggest swimming pool of Iceland, Laugardalslaug, closed due to the novel Coronavirus COVID-19 pandemic in Reykjavik, Iceland. - Birdsong now fills the air around Iceland's outdoor swimming pools, closed for weeks because of the new coronavirus to the dismay of locals, for whom the popular spots lie at the very heart of Icelandic life. The British have their pubs, the French have their cafes, and the Finns have their saunas. Here, Icelanders flock to the pool to swim laps or just hang out in the hot tubs. As restrictions are gradually being eased, Iceland's pools are set to reopen on May 18, though only 50 people will be allowed in at a time. (Photo by Jeremie RICHARD / AFP)

High and dry: Icelanders inconsolable without their pools

Agence France-Presse / 04:46 PM May 06, 2020
Reykjavik, Iceland — Birdsong now fills the air around Iceland’s outdoor swimming pools, closed for weeks because of the new coronavirus to the dismay of locals, for whom the popular spots lie at the very heart of Icelandic life.
The British have their pubs, the French have their cafes, and the Finns have their saunas. Here, Icelanders flock to the pool to swim laps or just hang out in the hot tubs.
Even on the coldest winter days, Icelanders love to take a dip in one of the many outdoor pools.
The country’s 134 municipal swimming pools and other hot pools are as much a place to socialize as to exercise.
“It’s a cultural thing. We come together in the pools to meet other people, to talk to each other, and just relax after a hard day at work or after a good workout,” Hulda Bjarkar, who normally teaches swimming lessons at Iceland’s biggest pool Laugardalslaug, tells AFP.
This sprawling complex in the center of Reykjavik has been closed since March 24 as part of the restrictions aimed at curbing the spread of the virus.
The water still ripples in the main pools but the complex’s four hot tubs – where temperatures range from 40 to 44 degrees Celsius (104 to 111 degrees Fahrenheit) – have been emptied, and the chirping of birds has replaced the usual chatter.
The place usually welcomes 1,800 daily visitors.

“You would (normally) see the elderly people in the morning doing their exercises in large groups, so for them, it is a big adjustment to not be able to see their friends here every day,” said Bjarkar.
One of those is 80-year-old Robert Spano, who moved here from Italy a half-century ago after falling in love with an Icelandic woman.
“It is very, very difficult that the swimming pool is closed because it is our way of life,” says the retired businessman, who lives by the proverb “When in Rome, do as the Romans do.”
“I enjoy being outside in the pool, I enjoy it when it’s snowing, raining, cold, I don’t really care… It’s very healthy for me.”
He goes for a swim every day with his wife, meeting up with friends and chatting for up to an hour in one of the outdoor hot tubs.
Those enjoyable talks – about politics, sports, or the weather – have not been able to take place elsewhere instead due to social distancing rules.
For others, it’s not the socializing they long for, it’s the swimming.
“That’s one thing I really miss: the contact with the water. It’s a coping mechanism for me since it helps me to clear my mind,” said 23-year-old Kristinn Thorarinsson, one of Iceland’s most promising swimmers who normally practice twice a day.

Public swimming pools are relatively new to the North Atlantic volcanic island, known for its abundance of hot springs.
With the rise of coal and heating oil prices in the early 20th century, Iceland began transitioning to alternative energy sources, harnessing geothermal power.
This energy was also used to heat swimming pools, which made their debut on the subarctic island soon after.
“They started building swimming pools for hygiene reasons, for exercise, and for survival,” said Valdimar Hafstein, a professor of folkloristics and ethnology at the University of Iceland in Reykjavik.
Around the same time, the country was transforming its economy from one based on agriculture to one based on fisheries.
But substituting sickles for fish hooks turned out to be precarious.
“No one knew how to swim, so there were a lot of drownings,” Hafstein said.
In 1940, the government made swimming lessons mandatory in school, and municipal swimming pools began popping up everywhere, even in tiny rural villages.

Iceland now has one pool for every 2,700 inhabitants, one of the highest rates in the world, and swimming is deeply rooted in Iceland’s lifestyle.
Starting at age six, children normally have several swimming lessons a week with school, rapidly making it an integral part of their daily lives.
In 2019, transport authorities recorded zero drownings at sea for the third straight year, and only the sixth time in more than 100 years.
Iceland had as of Monday confirmed 1,799 cases of the new coronavirus and 10 deaths, but the number of new cases has ranged between zero and three since April 23.
As restrictions are gradually being eased, Iceland’s pools are set to reopen on May 18, though only 50 people will be allowed in at a time.
Until then, Robert Spano is spending his time elsewhere.
“I spend at least two hours a day in the kitchen because I love to eat the Italian way.”