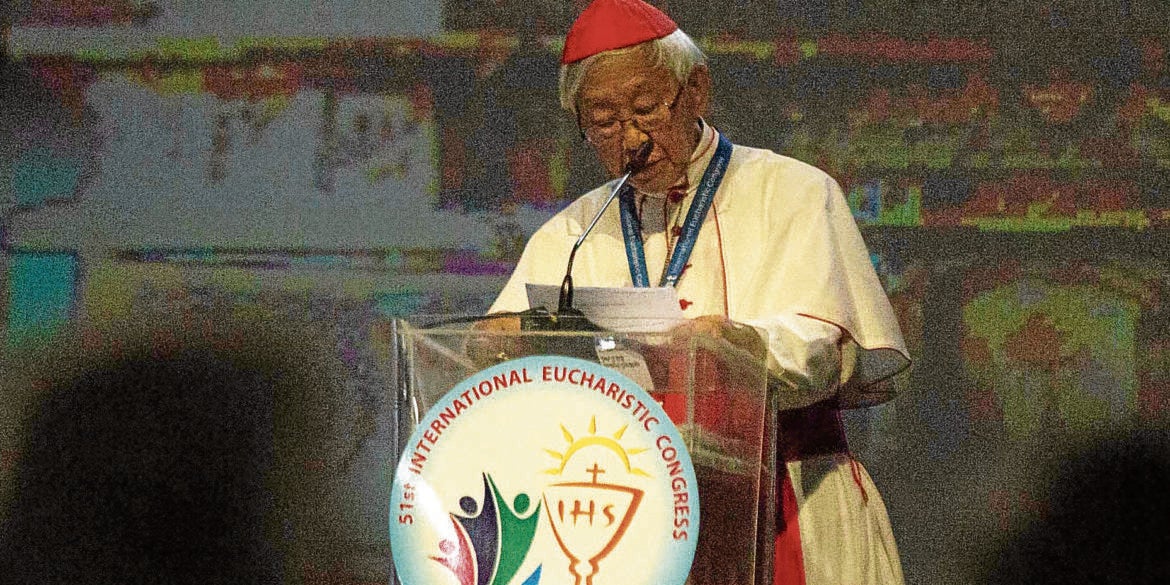 In an article early in April published in United Catholic News (Ucan) and The Tablet the of United Kingdom, Cardinal Bo lambasted China for its “lies and repression” and its mishandling of the COVID-19 outbreak. “Through its inhumane and irresponsible handling of the coronavirus, the CCP has proven what many previously thought: that it is a threat to the world,” declared Bo, president of the Federation of Asian Bishops’ Conferences.

“His courage surprised me, but the article is very accurate and fair,” wrote Zen in a blog article published by Ucan on May 6.

“I could not find anything theological in the article of the ‘theologian,’ with such an emotional title, and its content is gratuitous and even self-contradictory,” Zen said.

“[Chambon] writes: ‘I agree with Cardinal Bo that lies and propaganda have put millions around the world in danger.’ That’s precisely the main substance of Cardinal Bo’s article,” Zen pointed out.

Chambon’s contention that Bo was “politically dividing the world” with his condemnation of China, was called by Zen as “gratuitous.” “The one who inflicts calamity on people and his victims are rightly put on two opposed sides of the division, but there is nothing political in this,” the Hong Kong prelate wrote.

“And here comes the astonishing statement in Chambon’s article: ‘Insulting the China regime is also spitting in the face of the nation which supports it.’

“Anybody with a little knowledge of China would laugh at it and consider the time wasted in reading this ‘theologian’ and ‘anthropologist’ studying the Church in China.“With people like Michel Chambon, there would never have been a French Revolution,” declared Zen.

A Salesian like Bo and the Catholic bishop of Hong Kong from 2002 to 2009, Zen, 88, has often been compared with the late Manila Archbishop Jaime Cardinal Sin, who led the People Power Revolt in 1986 against President Ferdinand Marcos. Zen is a vocal critic of the CCP and has called for Hong Kong to be given full democracy.

Zen and Bo in Cebu

This writer met Zen during the 51st International Eucharistic Congress (IEC) in Cebu in 2016. Incidentally Bo was papal legate and the personal representative of Pope Francis to the Cebu IEC.

During the IEC, Zen said he hailed from Shanghai and was in Hong Kong for his seminary formation when the communists took over in 1949.

“We became a silent Church” after the communist victory, said Zen. “But we have not been silenced.” He noted that the Chinese Church had had a “glorious history” of persecutions.

“But don’t forget the Christians in China,” he told the IEC delegates. “They are still in deep water and burning fire.”

Offering a “testimony” to the delegates, Zen lamented the deteriorating relations between China and the Catholic Church, which seemed to contrast with his claim 10 years before during a synod of bishops in Rome that the situation was on the way to “normalization.”

Zen cited the case of Bishop Cosma Shi Enxiang, who had been imprisoned by communists for 60 years and who reportedly died in February 2015 at age 94.

He said Shi’s family was informed by a local party boss of the death, but this was later denied by higher authorities who said that the official was “drunk.”

Another prelate, Bishop James Su Zhimin of Baoding, 82 then, had been in prison for 18 years, said Zen.

Su was arrested in the late 1990s for refusing to profess loyalty to the Chinese wCatholic Patriotic Association, the church recognized by communist authorities.

A day after his EIC address, on Jan. 26, 2016, at 4:30 p.m., Zen celebrated the “Holy Mass in Extraordinary Form,” that is, the traditional Latin Mass, at the Asilo de Milagroso on Gorordo Avenue. It was the first and perhaps only traditional Latin Mass to be celebrated by a cardinal in the Philippines since it was restored by Pope Benedict XVI’s 2007 apostolic letter, Summorum Pontificum.

It was Pope Benedict who elevated Zen to the cardinalship in 2006. During the Cebu IEC, Zen noted that his elevation was a sign of “the Holy Father’s concern and affection for all of China.”

In his book, “For Love of the People I Will Not Remain Silent” (Ignatius Press, 2019), Cardinal Zen defended the 2007 pastoral letter of Pope Benedict XVI to Catholics in China, which he says is the “magna carta” of the Chinese Church and provides “pastoral guidelines” in dealing with communist authorities.

The book collected the lectures he delivered in 2017 to mark the 10th anniversary of the pastoral letter. The year before, in September 2018, the Vatican and Beijing signed an agreement, whose details remain secret. The deal, according to reports, is designed by Beijing to bring all of China’s 10-12 million Catholics under the control of the state-run Chinese Catholic Patriotic Association.

Although initially saying he would not oppose the deal publicly, Zen reneged on his pledge after the Hong Kong riots broke out. He denounced the silence of the Vatican on the protests. “The Church has a history of standing up for what is right in Hong Kong,” he wrote in an opinion piece in The Washington Post. “When refugees from communist China first began to flock to Hong Kong, Christian churches contributed with their makeshift schools, hospitals and social centers and, above all, by instilling the Gospel values. This is the spirit and support Hong Kongers need from the Vatican today.”

Zen said the Vatican “cannot compromise” with the CCP. “They want complete surrender. That’s communism,” he said, calling Beijing a persecutor of the faith.

But Zen points out that graver errors have been committed under the watch of Pope Francis and he blames the incompetence of papal advisers for these.

He cites the 2017 Vatican symposium on organ transplants in which Dr. Huang Jiefu from China was invited to speak by Archbishop Marcelo Sánchez Sorondo, Pope Francis’ compatriot and the chancellor of the Pontifical Academy of Sciences and Pontifical Academy of Social Sciences. It turned out that as as vice health minister in 2005, Huang admitted that over 90 percent of the transplant organs in China were harvested from executed prisoners, but he promised reform of the medical system.

But the year before the Vatican symposium, a US Congress report had noted that despite Huang’s assurance in 2005, the forced harvesting was continuing. The report condemned China’s “state-sanctioned forced organ harvesting” and its killing of “nonconsenting prisoners of conscience,” including religious and ethnic minorities.

In his last lecture in the book, Zen declares that to be a Catholic in China is like living in a cage. Delivered a year before the 2018 accord, Zen’s lecture warns of “the sellout of the Church!”

“To us, a terrifying scenario is unfolding, the sellout of the Church! Not reconstituted unity, but a forced cohabitation in the cage. From the point of view of the faith, we cannot see any gain.” INQ